By any measure, Asians are among America’s most successful immigrant groups. Those who favor a more selective, skills-based immigration system might wish to increase their numbers. But some argue that ideological concerns should make conservatives skeptical of such new arrivals. In December, Penn Law professor Amy Wax pointed out that the “overwhelming majority [of Asians] vote Democratic,” arguing that “as long as most Asians support Democrats and help to advance their positions, I think the United States is better off with fewer Asians and less Asian immigration.” Others have recapitulated Wax’s take, arguing that restrictionists should oppose high-skilled Asian immigration because Asians vote for Democrats by a 70–30 margin.

We don’t reject the possibility that skilled Asian immigration could expand the woke elite. Immigration policy should prioritize smart people who love America, and it is not unreasonable to exclude people who support toxic ideas. At the same time, we believe that Asian-Americans are key potential participants in the conservative coalition. And the evidence shows that Asian preference for the Democratic Party is neither essential to their identity nor unalterable.

Are Asians, as a group, guaranteed Democratic voters? It’s conceivable. Black support for Democrats, for example, persists independent of socioeconomic or ideological factors. On the other hand, high-achieving Asians live, work, and mingle with other high-achieving Americans, often in bright-blue enclaves; maybe it’s just that high-skill voters prefer Democrats, and Asians tend to be high-skilled. So is the strong Democratic tilt of Asian voters a function of intrinsic Asian qualities, as Wax suggests? Or are their voting patterns simply similar to those of other elites? 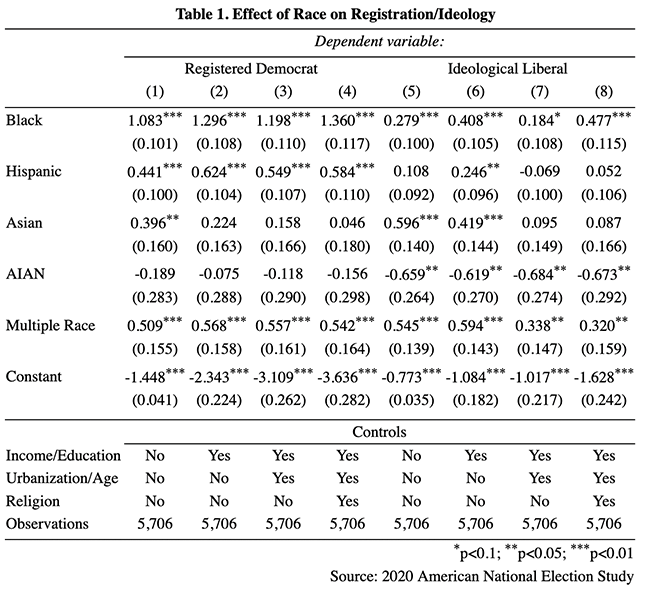 To address this question, we use data from the 2020 American National Election Study to construct several logistic regression models that test the effect of Asian identity on the odds of a respondent a) being a registered Democrat and b) identifying as an ideological liberal. For each variable, we show four models, successively adding controls for income, education, urbanization, age, and religious affiliation.

Absent controls, Asians are significantly more likely than whites both to be registered Democrats and to identify as liberal. But upon controlling for socioeconomic status, the registration effect is much smaller and no longer significant. The ideology effect, meanwhile, is rendered non-significant by further controls for urbanization and age. In other words, Asian voters are not meaningfully more likely to vote Democratic or to identify as liberal relative to non-Hispanic whites who are otherwise demographically similar—which means, overwhelmingly, the highly educated whites who make up an increasingly large share of the Democratic electorate. 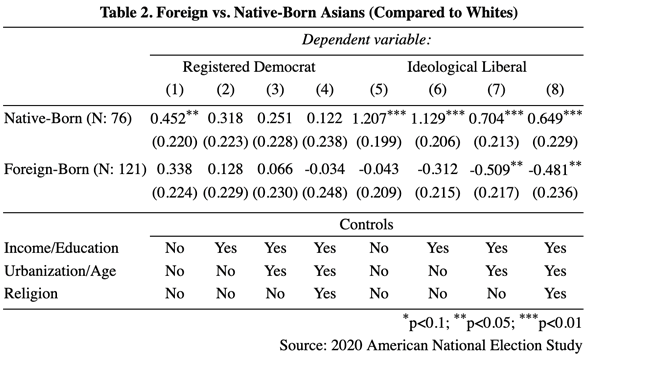 In fact, the data suggest that Asian immigrants are more conservative and less Democratic than Asian-Americans born in the United States. Table 2 reports the same effects as table 1, but with Asians further subdivided into foreign-born and native-born. With and without controls, foreign-born Asians are less likely to be Democrats or liberals than native-born Asians (compared with all whites). If policymakers want more conservatives, the (relatively small) ANES sample suggests that they should invite more foreign-born Asians, not fewer. And variation exists within the Asian population generally: more than half of Vietnamese-Americans voted for Trump in 2020, for example, compared with 74 percent of Indian-Americans backing Biden. Selecting on the artificial category of “Asian” alone is a blunt instrument.

To be sure, just because Asians vote for Democrats because of their similarity to other Democratic voters does not obviate their support for Democrats. But while Asian identification does not predict voter registration after controls, black and Hispanic identification does. Blacks and Hispanics, that is, tend to back Democrats because of their ethnic or racial identification, whereas Asians do so primarily because of socioeconomic status. Being a Democrat is not essential to Asian identification. (This does not necessarily weigh against black or Hispanic immigration, or exclusion of those groups from the conservative coalition; indeed, there is some reason to be optimistic about a Hispanic shift toward the GOP.)

Critics of Asian immigration are looking at the wrong variable. If they’re truly worried about importing future advocates of wokeness, they’d need to criticize all high-skilled immigration. Meantime, Asian political preferences can and will fluctuate with the preferences of other high-status Americans—a group historically far more willing to vote for Republicans than have been Hispanics and particularly blacks.

Research suggests an Asian-American realignment may well be possible. The political scientist Bang Quan Zheng has found that Asian-Americans, particularly those who are foreign-born, are likely to base their political attachments on policy preferences rooted in their core beliefs and values, as opposed to mere partisanship. Zheng’s theory runs counter to much of the conventional wisdom in American politics today, which holds that partisanship is one of the most accurate predictors of political behavior. Americans, the story goes, tend to vote according to their fidelity to one of the country’s two major political parties. But Zheng suggests that “this party-centric view may not be applicable to anyone or racial groups.” Asian-Americans may be one such example.

This is good news for the GOP, which can (and should) use its common-sense views on issues like crime and education—issues that, in recent months, have galvanized Asian-American communities around the country—to court Asian-American voters. Many Asians have grown weary of the Democratic position on these matters, in particular. Zheng’s own findings suggest that Asian-Americans’ policy preferences “nudge” them toward Democrats, but he considers only climate change, nuclear weapons, and illegal immigration; these issues are not mobilizing Asian-American voters to the extent that crime and education are.

For example, following the San Francisco School Board’s decisions to prolong pandemic-era school closures, and to replace merit-based admissions with a lottery system at Lowell High School, Asian San Franciscans voted overwhelmingly to recall three of the school board’s most progressive members. A few months later, Asian-Americans helped lead the (successful) effort to recall ultra-liberal San Francisco district attorney Chesa Boudin, whose soft-on crime policies were at odds with the city’s Asian-American community. Last week, the Asian American Legal Foundation and the Asian American Coalition for Education, which is composed of 368 Asian-American organizations, filed an amicus brief to the Supreme Court in support of Students for Fair Admissions in its lawsuits against Harvard and the University of North Carolina’s race-conscious admissions policies (which, in effect, have been shown to discriminate against Asian-American applicants). The Biden administration and most Democrats, by contrast, have expressed support for the two schools, and, more generally, the ongoing use of affirmative action in college and university admissions.

Being Asian-American is not synonymous with voting Democratic in the way that being black, or even being Hispanic, may be. Our findings demonstrate that Asian-Americans’ partiality toward the Democratic Party isn’t a reflection of their race or ethnicity but rather of certain other factors, like income, education, and urbanization. And because being a Democrat is not essential to Asian identity, we can conclude that Asian-Americans’ political opinions are malleable.

More importantly, it is possible for conservatives to bring Asian-Americans into the GOP coalition. Asian-Americans, more so than other racial or ethnic groups, have been shown to make political decisions on the basis of policy preferences rooted in core values and beliefs. This can work to Republicans’ advantage, for the two issues that have most mobilized Asian-Americans lately—crime and education—are those on which the conservative position is viewed as more favorable than the liberal one.

Asian-Americans are currently the fastest-growing racial or ethnic group in the U.S. Trimming Democrats’ advantage among them, as we think is highly plausible, could help Republicans win elections in the years ahead.

Charles Fain Lehman Democrats’ new public-safety legislative package is largely a sop to the pro-defund Left.
eye on the news

N. S. Lyons If the Right captures some of the Left’s youthful energy and rebellious cachet, it would represent a tectonic cultural and political shift.
eye on the news

Thomas Hogan Freeing a murderer on the way out the door
Saved!
Close