A few weeks ago, San Franciscans ousted three of the city’s school board members in a recall election. Each was known for advancing extreme progressive policies since their elections back in 2018. Some observers have suggested that the recall was more about voters punishing vulgarity and incompetence than about repudiating overly progressive policymaking: the recall’s poster child, board member Allison Collins, gained notoriety for making anti-Asian comments during her short tenure and filing a frivolous $87 million lawsuit against the district. But Collins, together with the other two board members recalled, Gabriela López and Faauuga Moliga, also indulged in the most performative excesses of woke identity politics—prioritizing virtue-signaling for adults over problem-solving for children.

Policies inspired by those attitudes ultimately cost the members their seats. First was the imbroglio over Lowell High School. For decades, Lowell had been a beacon of opportunity for the city’s brightest students, including many immigrants, who earned their place at the school by demonstrating superior academic achievement. Collins, López, and Moliga sought to end merit-based admissions policies, alienating many otherwise-liberal Jewish and Asian voters whose children disproportionately attended or hoped to attend Lowell.

Second was the saga over renaming schools. At a time when most of the city’s children hadn’t seen the inside of a classroom in months, the board made renaming schools a priority, rather than addressing learning loss from Covid. Harvey Milk was in as a moniker, but Dianne Feinstein was out. Thurgood Marshall could stay, but Abraham Lincoln had to go. The affair proved so embarrassing that the city’s progressive mayor, London Breed, reminded her putative political allies, “The fact that our kids aren’t in school is what’s driving inequity in our city. Not the name of a school.”

These incidents don’t escape the notice of parents and homeowners who vote, no matter their partisan affiliation. In the end, they drove the recall more than Collins’s gaffes did. But don’t take my word for it—consult the data.

With individual votes being secret and detailed information about which voters participated not yet available, the best method to evaluate competing explanations for the outcome is to compare support for the recall across precincts, using information on the composition of voters who cast ballots there in recent elections. Such aggregate-level analyses are not perfect, but they can teach us more than anecdotes, man-on-the-street interviews, and opinionating from pundits—all of which have dominated reporting on the recall election.

My analysis—using precinct-level election results from the San Francisco County Department of Elections and demographic data from California’s redistricting database—indicates that some reliably Democratic constituencies were displeased with the board’s policy agenda. First, as the figures below show, precincts where a greater share of voters were Asian and Jewish ¬were more likely to support the recall. These relationships between voter demographics and support for the recall remained relevant even after controlling for the previous level of support that each precinct gave to the recalled trio in 2018, for the share of voters who were Democrats, and for the overall political progressivity of each precinct (measured using DeLeon and Latterman’s Progressive Voter Index). 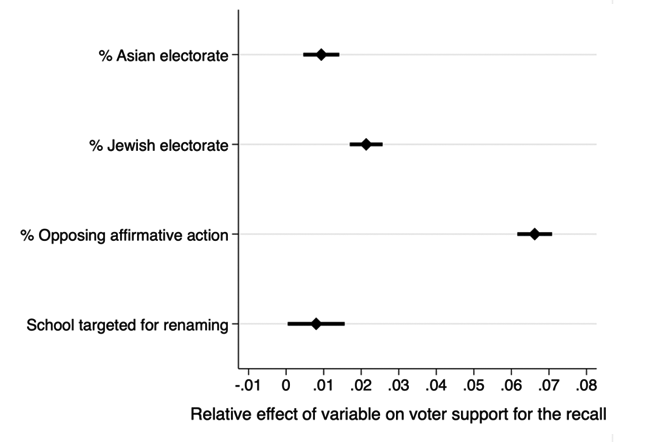 Notably, Asian and Jewish support for the recall did not vary by candidate. In other words, the recall wasn’t a narrow referendum on Collins; Asian precincts weren’t simply energized to vote for the recall by her remarks. A more plausible interpretation of these results is that many Asian and Jewish voters supported the recall because they were upset about the board’s effort to end merit-based admission policies at Lowell. Perhaps this explains why precincts where more voters rejected Prop. 16 in 2020, which would have restored race-based affirmative action in California, were also more likely to support the recall.

Finally, I found that precincts containing a school that the board had designated for renaming voted slightly more for the recall. All else being equal, support for the recall was about one percentage point higher in precincts where a school’s name had been up for a change. Voter turnout was about two percentage points higher in these precincts, even after accounting for each precinct’s level of turnout in 2018. In contrast, turnout rates in the city’s 2018 school board election were entirely unrelated to the presence of one of these school targeted for renaming. 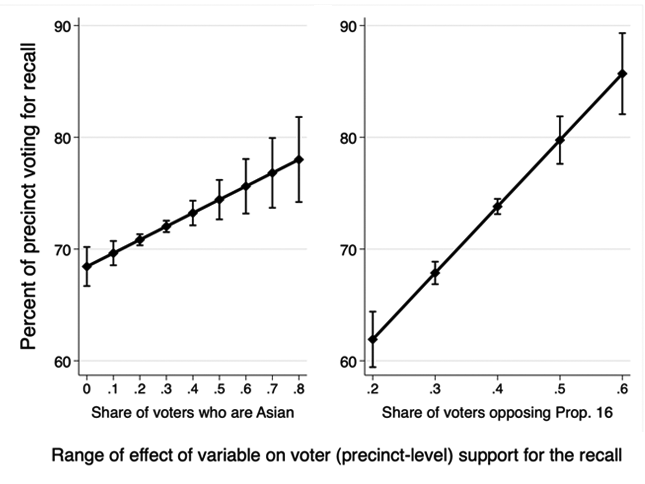 Figure 2 shows the effects of the share of Asian voters (left side) and the share of each precinct’s having opposed Prop. 16, which would have restored race-based affirmative action (right side), on the level of support for the recall in a precinct.

Taken together, these findings are largely consistent with a policy-based explanation for San Francisco’s school board recall. Until Democrats rein in the most progressive elements of their coalition on education, the party is likely to find itself vulnerable on the issue.

Michael Hartney is a professor of political science at Boston College and an adjunct fellow at the Manhattan Institute.

Michael Hartney The Florida governor shows conservatives how to break the teachers’ union stranglehold on local school boards.
eye on the news

Michael Hartney Seeking to maintain their grip on power, teachers’ unions feign worry over the “politicization” of education.
audio

Sizing Up the Education Wars