Will the Hispanic Rightward Turn Last?

One of the surprises on Election Night 2020 was how much Donald Trump gained among Latino voters, especially in such regions as Miami-Dade County and the Rio Grande Valley in Texas that had long been Democratic strongholds. Later Pew polling of 2020 voters would show that Hispanic voters nationwide went from voting in 2016 for Hillary Clinton by a margin of 38 percentage points to voting in 2020 for Joe Biden by a margin of only 21 percentage points. This is a potentially seismic shift: as the Hispanic population continues to grow, especially in large swing states, its voting power becomes more and more relevant to winning the Electoral College.

Geographic data confirm the trend. The maps below show a side-by-side comparison of majority-Hispanic counties in Texas and Florida and the change in the presidential margin between the two cycles. They indicate that the areas that moved the most toward the GOP were majority-Hispanic counties. And they didn’t move just a few points—Miami-Dade, for example, gave Trump a net 205,000 votes over 2016. Meantime, counties to the west, along the Mexican border, that aren’t majority Hispanic did not move toward the Republicans as much as the less-white surrounding counties. 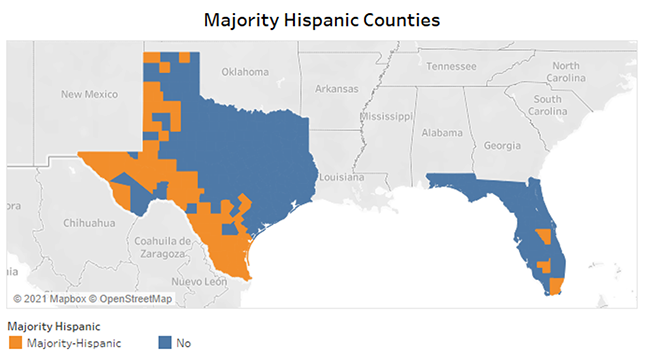 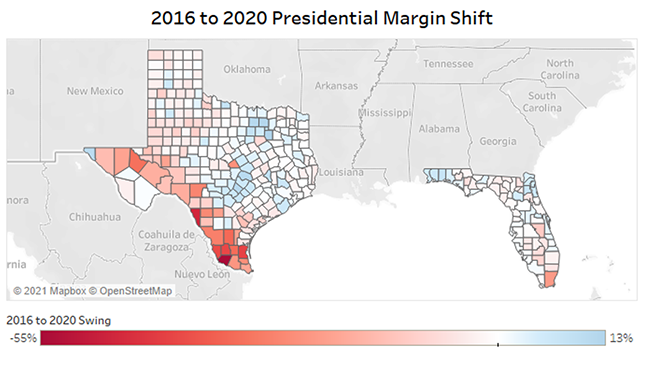 Last November, this shift came as a shock. But in retrospect, Democrats should have seen it coming—for a giant blinking red light appeared eight months before Election Day. Just as the 2016 presidential primaries foreshadowed Hillary Clinton’s weakness with white working-class voters—who abandoned her in droves during the primary to insurgent Bernie Sanders, then left the party entirely during the general election—Latino voters’ primary-voting patterns foreshadowed their eventual right turn.

The next table, compiling data from counties in Texas and Florida, plots the change in the presidential margin between 2016 and 2020 against the percentage change in the number of Biden primary votes from the number of Hillary Clinton primary votes four years before. Any dot to the left of the 100 percent line represents a place where Biden received fewer votes in the primary than Clinton did; any dot to the right represents a county in which he did better. Meantime, the closer to the bottom a data point is, the more it swung toward Republicans between 2016 and 2020. (Florida’s primary was noncompetitive in 2020, while the Texas primary mattered, but that had no discernible effect on the trend between the two.) 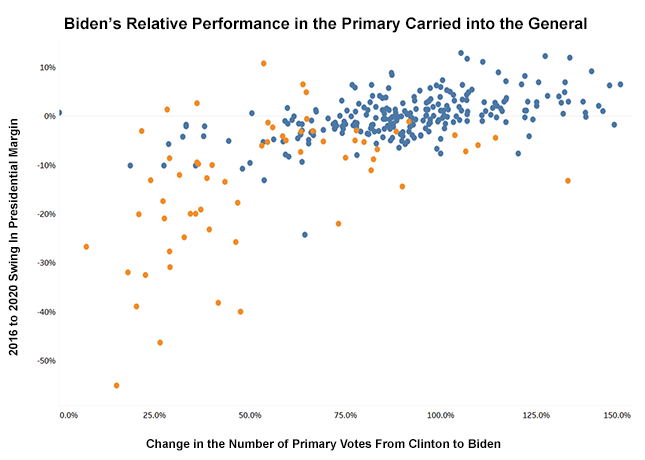 Primary results can be telling of future election trends. Party identification is usually a lagging indicator of electoral performance—people usually start voting for a party long before they change their party registration. For example, though West Virginia was the second-biggest Trump win in the nation, only recently did Republicans become a plurality of registered voters there. Before they officially switch parties in the state’s voter-registration database, then, these voters cross over to vote for candidates they prefer in primaries for the other party.

Will those Latinos who pulled the lever for Trump in 2020 become reliable Republicans? As the country polarizes along lines of educational attainment, places with heavy populations of residents without college degrees are moving toward the GOP—from older suburbs and inner cities to rural areas. In many of these cases, as with South Texan Tejanos, cultural conservatism binds these communities together. Next year, pay attention not only to whether Latino voters vote Republican in the general elections but also to whether they show up in Republican down-ballot primaries in higher numbers than in the past.

Noah Rudnick is the director of research at Cygnal, a Republican polling firm, and writes a blog about historical election trends.

Knowing How to Vote