The Toxic Narrative About Police Is Wrong

In the aftermath of George Floyd’s death in police custody in Minneapolis—a death that appears, from all video evidence, to be a brutal and unjustified use of police force—rioters have set cities ablaze across the United States, looting businesses, destroying property, and attacking police. For many, this prolonged civil unrest is shocking. It shouldn’t be. Police have been the targets of a poisonous, decades-long campaign to paint law enforcement as a violent cog in the machine of a racially oppressive criminal-justice system. As more and more serious-minded people embraced this narrative and disregarded the astonishing progress made in racial tolerance, the question ceased to be whether America would see the large-scale riots of the kind that occurred in the mid- to late 1960s—when charges of widespread racism in policing had some merit—but only a question of when.

Many protest supporters have expressed frustration with the attention being given to a relative handful of agitators driving the violence and looting—behavior, they say, that distorts the image of what is largely a peaceful movement. Their frustration is understandable but also ironic: the narrative that has driven thousands into the streets is itself a distortion. Just as the violence that has alarmed the American public does not represent the peaceful protesters exercising their right to air their grievances, the police violence depicted in viral videos does not characterize the institution of law enforcement.

This is not to say that police are perfect, or that officers never abuse their power; they are not perfect, and some do succumb to what can be an intoxicating sense of authority. This is a truth I’ve personally experienced. Nor is it to say that there is no room to improve policing and to make police-citizen encounters both safer and less fraught. But if there is to be any hope for peacefully bridging the gap so strikingly represented by the glass-covered asphalt separating rioters and police, destructive hyperbole needs to be recognized for what it is.

The data on police use of force predominantly reveal professionalism and restraint. Yet, as with so many aspects of America’s criminal-justice reform debate, context and nuance are regularly cast aside in favor of obfuscation and mischaracterization. Consider, for example, an op-ed in Monday’s Washington Post by columnist Catherine Rampell, in which she lamented that, “In the United States last year, police shot and killed more than 1,000 people; by comparison, across England and Wales, fewer than 100 died in police shootings over the past two decades.” While factually accurate, this observation ignores important and obvious differences between these nations. America is home to nearly 330 million people, for instance, while England and Wales have a combined population of about 59 million.

These numbers explain why the United States sees comparably more deadly police-citizen encounters than some other Western European democracies to which it is so often unfavorably compared. The higher rate of police use of force must also be contextualized in light of the overall volume of police activity. In 2018, police discharged their firearms an estimated 3,043 times, killing 992 people. Without more information, one can understand how these numbers might suggest that police violence is common. But consider also that, that same year, an estimated 686,665 full-time law-enforcement officers made more than 10.3 million arrests—a fraction of the more than 50 million contacts (based on 2015 data) that they have with members of the public (think traffic and pedestrian stops, investigative inquiries, and so on). As I recently argued in The Federalist Society Review: even if we attribute each of the 3,043 estimated firearm discharges by police in 2018 to a unique officer, we can infer that, at most, 0.4 percent of police officers purposely discharged a firearm in 2018. And if we assume that every shooting happened during the course of a separate arrest, we can infer that, at most, police applied deadly force with a firearm in just 0.003 percent of arrests.

This is in line with other data I highlighted in these pages two years ago—namely, a 2018 study published in the Journal of Trauma and Acute Care Surgery, which analyzed more than 114,000 criminal arrests made across three midsize police departments, finding that more than 99 percent of arrests were carried out without the use of physical force. In 98 percent of the cases in which those officers did use physical force, suspects “sustained no or mild injury.”

Historical context is important, too. In 1971, New York City Police discharged their firearms 810 times, wounding 221 people and killing 93. By 1990, those numbers were down to 307, 72, and 39, respectively. In 2016, police discharged their weapons just 72 times, wounding 23, killing 9. This is real progress; but it would come as news to anyone observing the mobs that have spent the last few days hurling insults, rocks, and Molotov cocktails at exhausted and demoralized members of the NYPD.

As troubling as cases like that of George Floyd are, we must remember that they are outliers. That knowledge won’t bring comfort or justice to those harmed or killed by police who use unjustifiable force, or their families; but it can help lower the temperature in an environment that is about as inhospitable to reasonable discussion as can be imagined. Grounding the debate about how to improve policing in data rather than hyperbole may help rebut the toxic narrative about policing that has become so broadly accepted. Its persistence, in minds and hearts, will only lead to more of the destruction and anarchy currently ravaging our country. 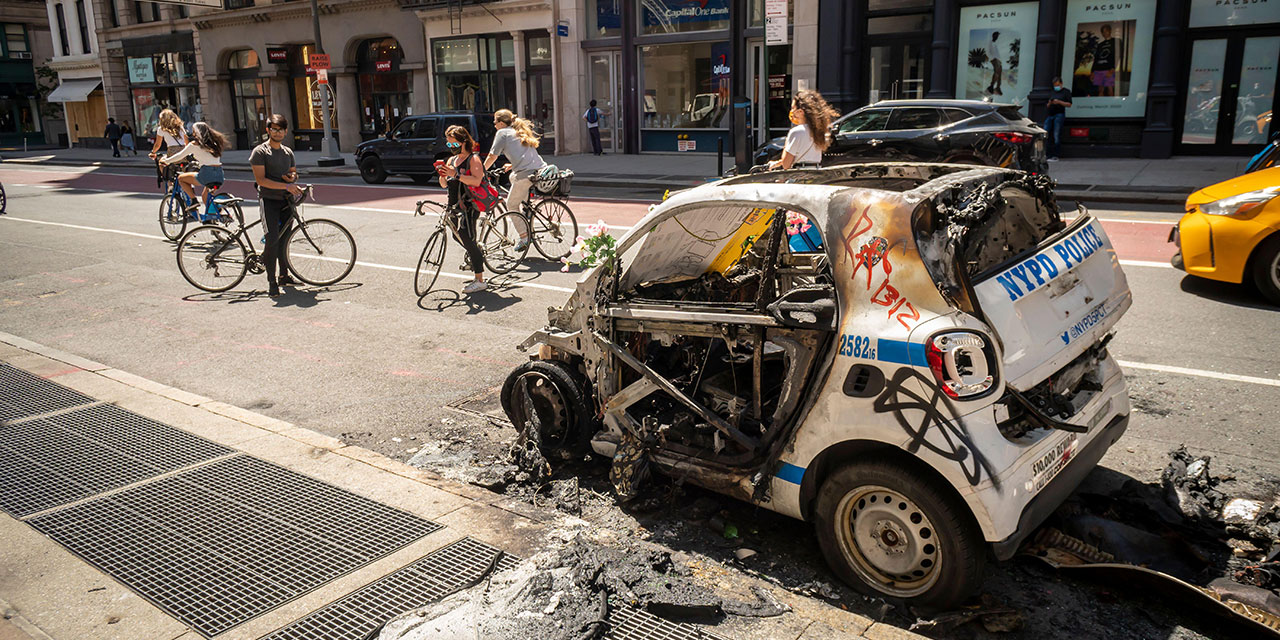 Rafael A. Mangual How the growing trend of criminal-justice reform for its own sake will make policing riskier—and the city less safe
More on