Four years ago, Mayor Bill de Blasio proclaimed that New York City’s renowned specialized high schools didn’t “look like” the city and declared war on their meritocratic admissions processes. In his announcement, de Blasio cited the familiar woke mantra that achieving the all-important goal of “equity” would not compromise excellence. Four years later, how has excellence fared? Thanks to data recently obtained by parents who used Freedom of Information requests on perhaps the two best-known specialized high schools—Bronx Science and Stuyvesant—we now have answers.

New York State’s 1971 Hecht-Calandra law established that the specialized high schools must admit all the highest-scoring students (and only these) from a blind-graded entrance exam, the Specialized High School Admission Test (SHSAT). To many progressives, such meritocratic admissions violate equity. De Blasio couldn’t persuade the state legislature to repeal Hecht-Calandra, however, in part because Asian parents mounted a passionate grassroots fight. Thwarted, the mayor mandated a workaround of Hecht-Calandra by abusing Discovery programs—backdoors for admission to participating specialized high schools, permitted under Hecht-Calandra. Under Discovery, a disadvantaged student who missed the SHSAT score cutoff at all specialized high schools could still enter one by securing a teacher recommendation and completing a summer catch-up program at that school.

Hecht-Calandra clearly intended the SHSAT to be the main entrance into the specialized high schools, but it didn’t explicitly limit the size of the Discovery exceptions. De Blasio exploited this apparent loophole by throwing wide open the Discovery backdoor, expanding it to one-fifth of every specialized high school, at the expense of the meritocratic SHSAT. But this is where a key protective proviso in Hecht-Calandra kicks in. Section 1, 12(d) of Hecht-Calandra states that Discovery programs must be run “without in any manner interfering with the academic level of these schools.” In any manner is very strong language; it leaves no wiggle room to compromise academic levels or negotiate interpretations. To comply with this requirement, Discovery admits must perform academically at least as well as SHSAT admits.

This protective proviso is crucial for Bronx Science and Stuyvesant. Founded in 1938 and 1904, respectively, these two STEM schools have graduated 12 Nobel Prize-winners in science between them, as well as Fields medalists in mathematics and winners of the Abel, Wolf, and Turing prizes. Average SAT scores at the two schools, where about half the students are poor enough to qualify for the federal free and reduced-price school lunch program, are 1440 and 1480, respectively, comparing favorably with scores of top schools with far wealthier demographics, such as Phillips Exeter (1450), Dalton (1440), and Great Neck South (1390). Hecht-Calandra’s protective proviso is key to preserving such rare excellence against an abusive expansion of Discovery.

To settle the question of whether Discovery admits are as high-performing as SHSAT admits, we need a metric for educational performance. The politico-education establishment likes to cite graduation rates or grades, but it is well-known that these metrics are plagued by perverse incentives and are untrustworthy. Instead, scores from New York State’s High School Regents Examinations provide a third-party, consistent, meaningful standard for comparison. If Discovery admits are not academically inferior to SHSAT admits, then their Regents Exam scores should be at least as good as those of SHSAT students.

The data show that this is not the case.

The graph below, using data from the parents’ Freedom of Information request, compares the average Regents scores of SHSAT admits, in green, against the average scores of Discovery admits, in red, at Bronx Science and Stuyvesant for the classes of 2022 and 2023, in all six high school Regents exams provided by the Department of Education. 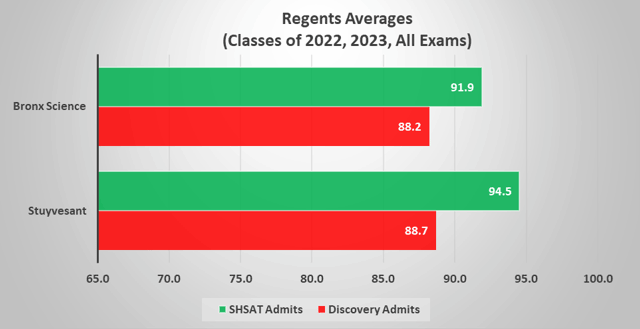 Additionally, comparing the six pairs of Regents average scores separately confirms that Discovery admits function at lower academic levels than SHSAT admits. In every Regents exam at both schools, Discovery admits underperform SHSAT admits, and by a full letter-grade step of A– to B+ in every subject and in every year, other than biology in 2022. 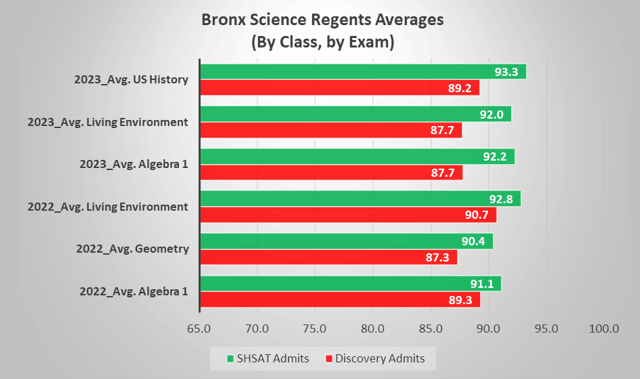 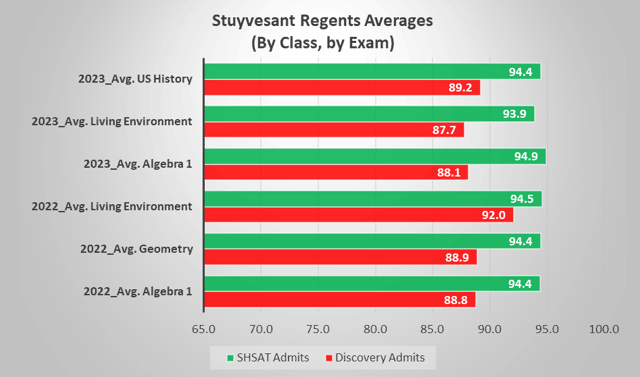 A letter-grade step difference cannot be dismissed. The politico-education establishment might say that a B+ is “good enough”—after all, they can’t even get half of New York State’s kids to grade-level proficiency. But Stuyvesant and Bronx Science are intended to achieve rarefied levels of excellence. Besides, even if the politicians and administrators can’t grasp or don’t care about achieving such excellence, the Hecht-Calandra law requires them to protect it. A class averaging B+ is very different from a class averaging A– in terms of classroom energy, learning pace, and depth of material. Stuyvesant students know that, all else being equal, classmates with an A– average go to an altogether different league of colleges than classmates with a B+ average.

The damage to excellence is further compounded by the sheer scale of Discovery expansion. When as much as one-fifth of a school is of a distinctly lower caliber, necessary downgrades will seep through the entire school. For example, the school might have to reduce offerings of multivariable calculus—the kind of advanced course that makes Stuyvesant preeminent—to free resources to increase offerings of Algebra I, which many SHSAT admits skip. The school might even eliminate multivariable calculus altogether because, in the language of equity, nobody should be “stigmatized.” This is not idle speculation; it happened in a similar situation.

Second, the data disprove again (as this paper by Will Dobbie and Roland Fryer and this analysis by Metis explain) the unsubstantiated claims by equity advocates that the SHSAT doesn’t predict academic performance. The data show exactly the opposite. Students admitted outside the SHSAT, and hence with lower SHSAT scores, performed worse than students admitted by the SHSAT. We could not ask for a better comparison.

Finally, while the data show that equity is indeed incompatible with excellence at Bronx Science and Stuyvesant, it would be a mistake to dismiss these data as mere special cases. It’s just that in these instances, we got the data; elsewhere, we had to learn from leaks and whistleblowers. Around the country, top meritocratic exam schools such as Thomas Jefferson High School for Science and Technology in Northern Virginia, Lowell in San Francisco, and Boston Latin are all seeing their excellence sacrificed on the altar of equity. Nor are exam schools the only battlegrounds where excellence is under assault. Lotteries replacing admissions criteria at non-exam schools, weak curricula further dumbed down, grades inflated, Gifted and Talented programs hollowed out, and the number of charter schools capped despite demonstrated excellence—all are being done in the name of equity. Aware that parents are wising up, equity advocates are learning to camouflage their agenda with the latest verbiage about social and emotional learning, but their quest to tear down excellence is unmistakable by its fruits.

Families that want rigorous education for their children face a choice. They must either vote with their feet and leave the schools, or use the political process to remove equity ideology and restore meritocracy. Excellence is too important to ruin.

Wai Wah Chin, an adjunct fellow at the Manhattan Institute, is the founding president of the Chinese American Citizens Alliance of Greater New York, an all-volunteer organization advocating for equal rights for New Yorkers, especially in education.

Wai Wah Chin Inflated grades and lowered standards, often in the name of “equity,” are destroying educational excellence from kindergarten through college.
eye on the news

Wai Wah Chin To address the public-safety crisis, New York’s leaders should begin by rolling back failed policies.
More on