On Wednesday, the New York State Division of Criminal Justice Services (DCJS) quietly dropped a bombshell. For months, the state has avoided releasing much-needed data on individuals who were arraigned in New York before lawmakers passed bail reform. But newly available data confirm what critics have long argued: bail reform was followed by a significant increase in criminal reoffending.

It’s worth explaining the new data in detail. Until now, analysts not privy to government databases had to use data on arraignments in New York State published by the Office of Courts Administration. Those data currently cover most arraignments between January 1, 2020, and December 31, 2021. New York’s bail reform went into effect on the earlier date. This means that no detailed data were publicly available on arraignments and their outcomes before bail reform—something we need to understand how things changed after bail reform’s implementation.

The new supplemental data, however, contain arraignments going back to the beginning of 2019—an additional 200,000 cases—with reliable rearrest information through September 2021. The data are imperfect: most notably, superior courts enter the data set slowly. But they provide the first comprehensive picture of bail reform’s effects. (Readers interested in how I produced the analysis in this article can find replication code here.)

Table 1: Composition of Releases, by Year and Type

The table above breaks out the four kinds of release decision for cases a) not resolved at arraignment and b) where the decision is known (about 86 percent of cases). What they show, essentially, is that in the post-bail-reform period, judges were less likely to set bail, and more likely either to release offenders on their own recognizance (ROR in the chart), or release them under restrictions—“non-monetary release/release under supervision,” or NMR/RUS, meaning that their release depends on some restriction other than putting up a bond, such as surrendering a passport or maintaining a job. The use of NMR, in particular, tripled between 2019 and 2021. That’s unsurprising: the whole point of bail reform was to reduce the use of cash bail, particularly by increasing the use of NMR.

The next table shows the share of each year/release type for whom a rearrest is reported in the DCJS data. In fact, it reports two different measures, based on the two different measures constructed by DJCS—one for rearrest within 180 days of arraignment, and one for any known rearrest within the available cycle. The 180-day rearrest window accounts for the fact that arraignments that happen later have less time to reoffend; picking a constant window controls for this effect. (This is why cases arraigned in the last three months of 2021 are omitted from the data, because insufficient time has elapsed to measure rearrest risk within 180 days.) Because this measure artificially censors cumulative rearrest risk, I present the other measure as well. 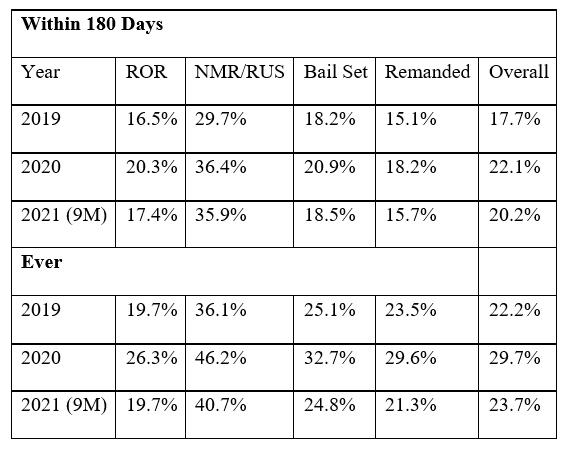 There’s a lot to these tables, but the basic takeaway is that rearrest rose after bail reform. Using the constant window, the increase is on the order of 3 to 5 percentage points. But that window necessarily undercounts rearrests.

Perhaps the most suggestive comparison is “ever” rearrest rates in 2020 versus 2019, as graphed below, with the 2020 rates more than 7 percentage points higher than the 2019 rates (with a one-year-less time to reoffend) overall. In other words, offenders arraigned in 2020 were significantly more likely to get rearrested than those arraigned in 2019, even given that more time has elapsed since the 2019 arraignments. It is quite probable, given the much shorter time since most 2021 arraignments, that the “ever” figures will rise to the 2020 level in time. 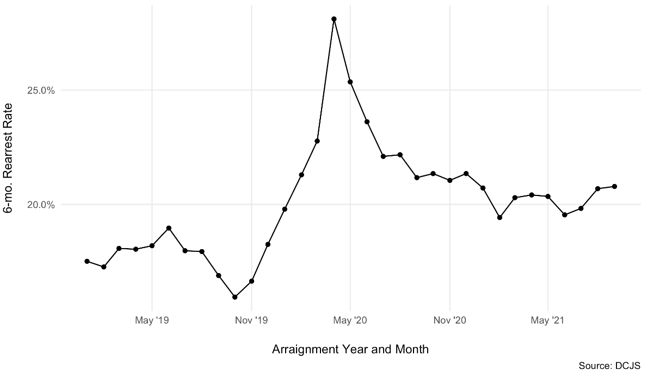 More evocative still is the monthly rearrest rate, as presented above. Rearrest rates for offenders released prior to bail reform usually were around 17 percent to 18 percent. In fact, they were declining until November 2019, when the Office of Courts Administration told judges that they could begin implementing bail reform early to avoid “logistical difficulties.” In December, New York City expanded its supervised release program to all pretrial detainees.

At this point, rearrest rates begin rising. They peaked in April 2020, when Covid brought mass releases from state jails. But even in the pre-Covid months, rearrests were well above the pre-reform trend. In July 2020, the first set of amendments to bail reform expanded the number of bail-eligible offenses. At that point, rearrest rates settled around 20 percent to 21 percent—3 to 4 percentage points higher than before bail reform.

Table 3: Share Rearrested, by Year and Region of Final Disposition

This effect is driven, as the third table shows, by a rise in reoffending outside of New York City, particularly upstate. Again, the 2020 versus 2019 “ever rearrested” comparison is instructive. If we assume that 2021 rates will converge to 2020 rates in time, then we can expect a durable increase of between 5 and 9 percentage points in reoffending within regions. Even using the 180-day figures, offending has risen 4 percentage points upstate and spiked significantly upstate and in the suburbs.

Notably, though, the 180-day comparison suggests almost no effect in New York City. Why? There’s a pretty simple reason, noted by DCJS and shown in Table 4 below.

Table 4: Composition of Releases, by Year, Type, and Region of Final Disposition 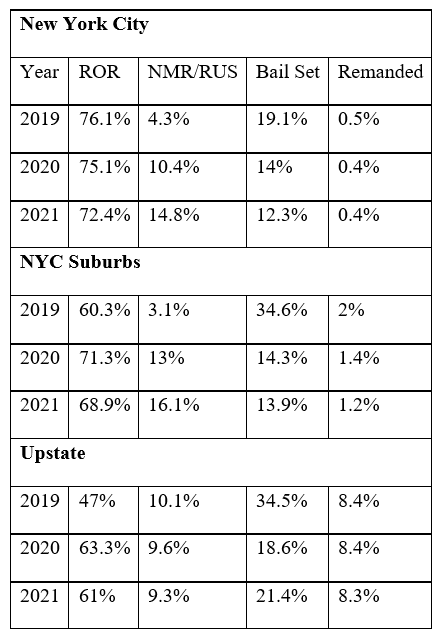 As Table 1 shows, under bail reform, people moved from being assigned bail to receiving non-monetary release and, to a lesser extent, release on recognizance. But as Table 4 shows, this shift was not uniform across regions. In New York City, the share of people released on their own recognizance actually fell following bail reform (a similar trend appears in DCJS’s quarterly summaries). That suggests that following bail reform, the average restrictiveness of release conditions in New York City did not change much—a reduction in the use of bail was paired with a reduction in release on recognizance. (It’s not entirely clear why, but it may reflect how New York City judges were already comparatively lenient before bail reform.) Outside of the city, by contrast, the average restrictiveness of pretrial detention declined significantly: release on recognizance and, in the suburbs, NMR were more likely to be used.

This decomposition is something of a sideshow, though. The main attraction is this: as far as we can tell from the new data, rearrest rates went up following bail reform.

Pre-trial detention in New York State is not supposed to be conditioned on whether a person is likely to reoffend. Both before and after bail reform, judges must release offenders on “the least restrictive alternative and condition or conditions that will reasonably assure the principal’s return to court”—that is, minimize his risk of failure to appear. Manhattan Institute scholars have emphasized time and again that New York State is unique in prohibiting judges from giving any consideration to public safety risk in remand decisions. But even given that reality, a shift toward less-restrictive pretrial detention conditions on average seems to have driven up the risk of rearrest following release.

Perhaps the increase in crime identified above will be offset by a reduction in future offending, given the long-run criminogenic effects of jail. On the other hand, the most relevant study to New York finds that the incapacitating effect of jail pretrial slightly outweighs its criminogenic effect post-release, at least within the study period. In any case, those effects are heterogenous. Some detainees are career criminals, for whom the benefits of keeping them behind bars almost certainly outweigh criminogenic costs; others are not.

One thing is clear: bail reform did not make it easier for judges to distinguish between criminals. Instead, it shifted the balance of detention against public safety—and, as John Jay College of Criminal Justice’s Michael Rempel noted during a public discussion of the data on Wednesday, it did so without closing the much-discussed racial gap in detention that it was largely intended to do. Until state lawmakers get smarter on reform, embracing such changes as the ones proposed by Manhattan Institute scholars, that situation will almost certainly persist.

Charles Fain Lehman is a fellow at the Manhattan Institute and contributing editor of City Journal.

Charles Fain Lehman, Renu Mukherjee Support for the Democratic Party among high-skilled Asian-Americans is not immutable.
More on

Howard Husock Public housing should be a temporary stop on the way to prosperity, not a magnet for long-term dependency.
eye on the news

John Ketcham As the new academic year begins, an ongoing court challenge to restore funds to the city’s Department of Education has put the entire city budget at risk of revision.
Saved!
Close