We Still Don’t Know How Many Crimes Bail Reform Caused

How many New York City criminals released under the state’s bail reform commit a new crime while out on release? It’s a deceptively simple question—but nobody can seem to agree on an answer.

As Mayor Eric Adams begs the state to allow judges to detain potentially dangerous offenders, State Senate Majority Leader Andrea Stewart-Cousins insists that only 2 percent of those released under the bail-reform law get rearrested for violent felonies. But that’s just one of a handful of estimates thrown around in recent weeks, as politicians and commentators cherry-pick statistics to paint bail reform in a preferred light.

The reason they can do so is that the best data lack vital information for discerning the effects of bail reform, or for estimating how many crimes those released under its terms commit. Adams is right to call for giving judges the discretion to detain the accused based on the danger they pose. But he should also demand that the state release more comprehensive data, giving analysts what they need to tell what bail reform has done to crime in New York City.

It’s true that much more data are available than in the past. For months after bail reform’s implementation, many advocates leaned on data furnished by the New York City Criminal Justice Agency, a nonprofit that opposes “unnecessary” pretrial detention. Those stats revealed relatively low offending rates: about 1 percent of those released committed new felonies. But those rates were on a monthly basis—a misleading (albeit frequently cited) measure, given that the average felony offender was out for ten months or more awaiting trial even before the Covid-19 pandemic slowed courts to a crawl.

Thankfully, the New York State Office of Court Administration recently released higher-quality data on dispositions of cases between January 2020 (when bail reform came into effect) and June of last year. Those statistics show that about 3 percent of those released (either with bail, under non-monetary conditions, or on their own recognizance) were subsequently rearrested for a violent offense; a further 9 percent were rearrested for nonviolent felonies. But, as The City noted, among offenders released on non-monetary conditions—a group that includes those most likely to reoffend—41 percent were rearrested, with 17 percent being arrested on nonviolent felonies and 6.5 percent on violent felonies. 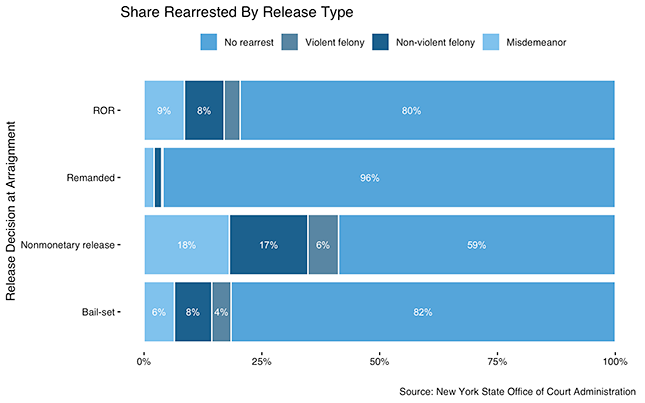 However, even those data have problems that make it impossible to discern the real effect of bail reform. Specifically, OCA’s data cover only the period after bail reform’s implementation, meaning that we have no pre-2020 numbers for comparison. Though changes in rearrest rates in 2020 would not necessarily be attributable to bail reform—much else happened in that year, after all—a baseline is an essential first step to good analysis. We know the OCA has these data, because the mayor’s Office for Criminal Justice has analyzed them. They should release them to the public.

The OCA’s methods also have a bias that tends to reduce any estimate of the number of offenses committed, and probably even the number of severe offenders, in the wake of bail reform. OCA’s data report only an offender’s first rearrest, meaning subsequent rearrests go uncounted. If someone is released and rearrested three times in one day, for example, he shows up only once in the data. And because less serious offenses are more common, the first rearrest is likely to be a less serious offense, meaning that subsequent violent offenses would not be counted.

The data provide hints as to the magnitude of this problem. As the NYPD’s John Hall has noted, OCA indicates whether the offender was subsequently rearrested on a gun charge, independent of his first rearrest. About 1.5 percent of those rearrested for misdemeanors or nonviolent felonies also had a firearm rearrest, indicating subsequent violent activity. Further evidence comes from data released by the mayor’s Office for Criminal Justice, which indicate that the share of violent offenders out on pretrial release rose from 20 percent in 2019 to 25 percent in 2020.

The state legislature should, of course, follow my colleague Rafael Mangual’s proposals to reform bail reform: permit judges to detain the accused based on the level of danger they pose, revoke or amend release based on rearrest, and fund speedier court proceedings. There’s no reason that addressing the inequities of cash bail requires us to put dangerous offenders on the street.

Meantime, we should at least have the numbers to tell us what bail reform did. Releasing data going back to 2018 and including information on multiple rearrests would help clarify things. There’s no reason OCA can’t do that, and Mayor Adams should demand that it do so as soon as possible.

Hate Crimes Can Be Solved or Stopped Like Any Other Crimes

Charles Fain Lehman A foiled plot in New York shows that old-fashioned policing is the best solution to the problem.
eye on the news

Charles Fain Lehman The GOP underperformed despite, not because of, being tough on crime.
More on

John Ketcham Eric Adams’s partial win in the fight to cut funding for city schools may presage a broader defeat.
from the magazine