Classical federal buildings rank among the most revered structures in the United States, starting with the U.S. Capitol, the White House, and Supreme Court, all in Washington. These buildings have shaped the federal image in the national consciousness, and indeed the world’s, while U.S. courthouses and their classical porticos have dignified public squares in countless American towns and cities. After World War II, however, and especially after promulgation of Daniel Patrick Moynihan’s Guiding Principles for Federal Architecture in 1962, the rate of aesthetic return on Uncle Sam’s architectural patronage cratered. Moynihan’s principles enabled modernism to deprive our federal buildings of stylistic coherence and aesthetic resonance. They ceased to speak to the aspirations of ordinary citizens.

The ongoing dysfunction has lots of support, though, including from the overwhelmingly modernist American Institute of Architects. So it comes as no surprise that leaks of a draft of a presidential executive order that would designate the classical and other traditional architectural idioms as “preferred” styles for federal courthouses, agency headquarters, and other federal office buildings, has caused an uproar in the modernist-dominated architectural community. That reaction should be regarded as a sign that the draft is on the right track.

If signed by President Trump, the order would not ban modernist federal buildings, though it would excommunicate two particularly odious strains, Brutalism and Deconstructivism—another excellent idea. It would make new classical buildings much more common. It would also encourage exterior renovation of existing modernist eyesores in traditional modes.

The American Institute of Architects, headquartered in Washington and claiming 95,000 members, has issued an online petition for members to sign and submit to the White House. Apparently looking to appeal to President Trump’s populist instincts, the petition warns him that the executive order “would put Washington bureaucrats in charge of design decisions affecting communities that they may never visit.” The truth: “Washington bureaucrats” at the General Services Administration, which oversees the federal government’s building program, are closely entwined with the AIA’s modernist power structure. Together, they have been setting the architectural tone for federal architecture for decades.

Also noteworthy in the reactions to the proposed order is the infrequent mention of four words: “dignity,” “enterprise,” “vigor,” and “stability.” Those were the qualities that Moynihan, in his Guiding Principles, stipulated that government buildings should convey. He also directed that there be no “official style” of federal architecture, and that design priorities should flow from the architectural profession to the government, rather than vice versa. Classicism, of course, had been the nation’s implicitly “official style” for most of its history, beginning with Washington and Jefferson. Moynihan’s four watchwords remain entirely valid, as the proposed order acknowledges, but his entrusting of architectural aesthetics to modernists made their realization an impossibility, thereby converting the federal government from a patron into a victim. The ensuing decades have demonstrated that not only does no official style exist in contemporary federal architecture; no coherent, symbolically resonant federal architectural presence does, either.

What we have instead is officially sanctioned stylistic chaos. In the hands of modernist elites—of which the highly politicized AIA is a pillar—the Guiding Principles helped make the United States the first preeminent political, military, and economic power in history to see the quality of its public architecture decline precipitously. Small wonder that historic preservation got national traction after the modernist takeover of the architectural profession. Alas, modernist dominance of our cultural institutions has reached the point where the National Trust for Historic Preservation has itself come out against the proposed executive order.

A classically oriented architectural counterculture emerged in the U.S. several decades ago. Impressive institutional work is now being done in demanding traditional modes, including Collegiate Gothic. Over the last two decades, Alabama has seen the erection of three classical or Art Deco U.S. courthouses that, while not brilliant achievements, are vastly superior to their modernist counterparts. The nation would benefit handsomely if the federal government made it a policy to offer humanistic alternatives to the dehumanized anomie afflicting our contemporary architecture.

One key challenge to rational discussion of federal patronage is that modernist architects and their supporters often look at buildings differently than the rest of us. They can see that Washington’s stripped-classical Rayburn House Office Building, completed as Moynihan drafted his principles, is uninspired. What they apparently can’t see is that it might as well be the Palazzo Farnese compared with the nearby Brutalist hulks that modernist pioneer Marcel Breuer designed for the Departments of Housing and Urban Development and Health and Human Services—not to mention other GSA-commissioned concrete monstrosities, such as the J. Edgar Hoover FBI headquarters on Pennsylvania Avenue. Modernist critics love Thomas Phifer’s hyper-minimalist, glass-box U.S. courthouse annex in Salt Lake City; locals have dubbed it the Borg Cube, after a spaceship manned by evil Star Trek aliens. 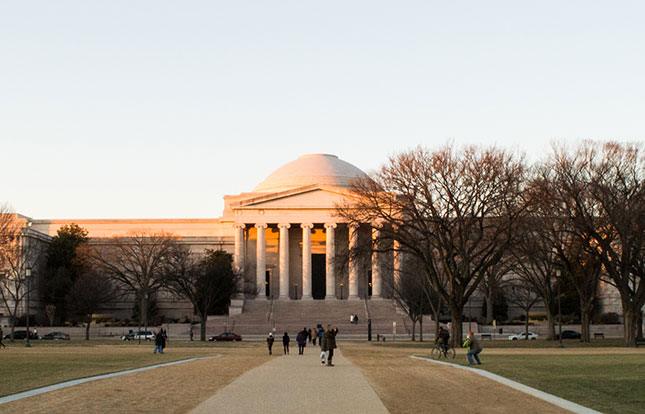 With celebrity architect Thom Mayne’s Deconstructionist Federal Building (2007) in San Francisco—which features a shallow 18-story, window-walled concrete slab, its main elevation decked out with a bizarre metal wrapping with a huge, disfigured gash—we probe still-deeper depths of visual nihilism. It wasn’t long before this project, which GSA publicized more effusively than any other over the course of its 25-year-old Design Excellence program, was recognized as a disaster on practical as well as aesthetic grounds. For the record, Mayne’s Federal Building marks an exercise in architectural authoritarianism. At least the strange, Rubik’s-cube-like U.S. courthouse in Texas’s capital indisputably helps “keep Austin weird,” as the familiar bumper-sticker urges. But since when is that federal architecture’s role?

From opponents of the proposed executive order we hear limited mention of specific modernist federal buildings, for the simple reason that when they aren’t histrionic, they tend to be bland and generic. One federal project that is cited reverentially is Mies van der Rohe’s high-profile, high-modernist Federal Center in Chicago’s Loop. This complex consists of a boxy, black-steel-and-glass tower for an office building; a boxy, black-steel-and-glass slab for a courthouse; and a squat, black-steel-and-glass box for a post office. As an exercise in urbanism, it’s not exactly a tour de force. As for Mies’s threadbare architectural vocabulary and his famous aperçu that “Less is more,” consider Robert Venturi’s eminently justified retort: “Less is a bore.” For its part, the bright-red abstract sculpture in the heart of the complex, Alexander Calder’s Flamingo, has no civic significance, as public sculpture commissioned by the federal government should.

So perhaps it’s not surprising that defenders of the Guiding Principles status quo make irrelevant mention of I.M. Pei’s East Building (1978) at the National Gallery of Art, again a favorite of modernist elites as opposed to the public, which vastly prefers John Russell Pope’s augustly classical West Building (1941). The East Building’s massing is prismatically picturesque in the frontal view but pathologically disjointed as one walks around the structure, while interior vistas are themselves disjointed as a result of the triangular orientation of Pei’s interior plan. On the whole, the building is an aesthetic misfire, devoid of human scale because it is conceived not in humanistic but in abstract geometric terms. In other words, it is devoid of classicism’s harmonious proportions and legible subordination of lesser architectural elements within larger formal units, both of which emanate from the human body itself, and both of which are core features of Pope’s masterpiece. The Pei building also experienced systemic structural failure of its marble cladding within 30 years of its completion, triggering a massive three-year renovation project. Plenty of Design Excellence buildings have raised performance issues of their own, though none so conspicuously.

To express the “dignity, enterprise, vigor, and stability of the American Government,” as Moynihan required, federal architecture should be guided by an understanding of history as the source of enduring norms, not as a mere process whereby one thing just happens after another. If the AIA’s postwar leadership had understood that, its ugly modernist headquarters in Washington wouldn’t look like it’s threatening to take William Thornton’s superb Octagon House (a Federal-period landmark now serving as an architectural museum) in its clutches and strangle the poor thing. In the absence of such an understanding, modernism has yielded not norms but extreme stylistic instability, with one fad following another. Such instability lies at the heart of the deeply impoverished stylistic “diversity” that the AIA advocates, while it pays lip service to the value of traditional architecture as a sop to public opinion. In the daily newsfeed from the organization’s official mouthpiece, Architect magazine, the marginalization of contemporary traditional work and an aggressively “progressive” political and architectural tone are equally pronounced.

One thing to be borne in mind at this politically charged juncture in our national life is that classicism is not an “ideology,” as some critics are charging. It is a formal language, with a vocabulary and syntax—originating with the classical column and its superstructure—geared to the idealization of structure in anthropomorphic terms. In other words, the classical language makes its appeal to us as embodied beings. It has shown itself supremely adaptable to changing social and technological conditions, and thoroughly receptive to regional inflections. Classicism is not, and never has been, a closed system. And it should come as no surprise that it has been used (and abused) by political regimes from one end of the ideological spectrum to the other.

Architectural theatrics, such as we encounter at Washington’s African American museum—an upside-down ziggurat clad with a bronze-tinted aluminum filigree—can generate lots of cultural buzz. But the theatrics rarely prove of enduring value. To get an idea of what’s at stake in the federal architecture brawl, take a tour of the new, enormous, and cacophonous Hudson Yards development on Manhattan’s Far West Side, and continue south along the High Line elevated park, running along a converted freight railway from there down to the new, neo-industrial-chic Whitney Museum of American Art at the park’s south end. You will experience a freakshow of architectural novelties extending for well over a mile. For comparison’s sake, take a look at the classically informed Hudson Yards proposal that City Journal published in 2004. This vision offered an inspiring architectural cosmos; the modernist elite has given us the opposite.

For the sake of an appropriately dignified and legible federal architectural presence in our communities, President Trump should reestablish the classical as Uncle Sam’s preferred idiom.

Catesby Leigh writes about public art and architecture and lives in Washington. He is a past founding chair and research fellow of the National Civic Art Society, which supports the proposed executive order discussed in this commentary.