Knowing How to Vote

Betting on success in the 2021 elections, Democrats put such issues as the right to clean air and water and expanded voter access on the ballot. New York’s Proposition 4, one such attempt, would have permitted excuse-free absentee voting—a key priority of national and state Democrats. History was on their side: according to Ballotpedia, odd-year ballot measures passed 74 percent of the time between 1985 and 2019. But in New York last week, three of the five ballot measures were voted down, including a complicated measure to change the redistricting process and the two voting-rights questions. The results indicate that partisan information efforts made the difference. Republican voters were on the same page and mobilized against the measures, while Democrats clearly didn’t know enough to vote for policies that their party supports.

Opponents of Prop. 4 were more organized than supporters. The campaign opposing it was the only one to air TV ads, with the Conservative Party of New York telling Republicans to vote against it, as NY1 noted. Meantime, the Albany Times Union reported that Democratic state senator Michael Gianaris asked for financial support for the effort in October but was rebuffed by the state party chair. “The Democratic Party made absolutely zero effort to communicate about the propositions, while the Republican Party led a major statewide initiative encouraging voters to vote no,” says Benjamin Rosenblatt, a Democratic political strategist and mapmaker for New York races. “Besides nonprofit advocacy and community groups, there was zero public information campaign telling voters to turn over the ballot and vote yes on the propositions.”

That difference in organization came through in the results. The measure lost, 56 percent to 43 percent. The image below compares the percentage of those who voted yes on Prop. 4 (in the map on the left, dark green indicates higher levels of support) to the 2020 presidential margin (in the map on the right). The counties in red that Donald Trump won are clustered together along a nearly straight trend line, indicating Republican opposition along party lines. The Democratic counties, on the other hand, are more scattered; several of the bluest counties fall well below the trend line—suggesting that Republicans knew the “right” way to vote while Democrats were unsure. 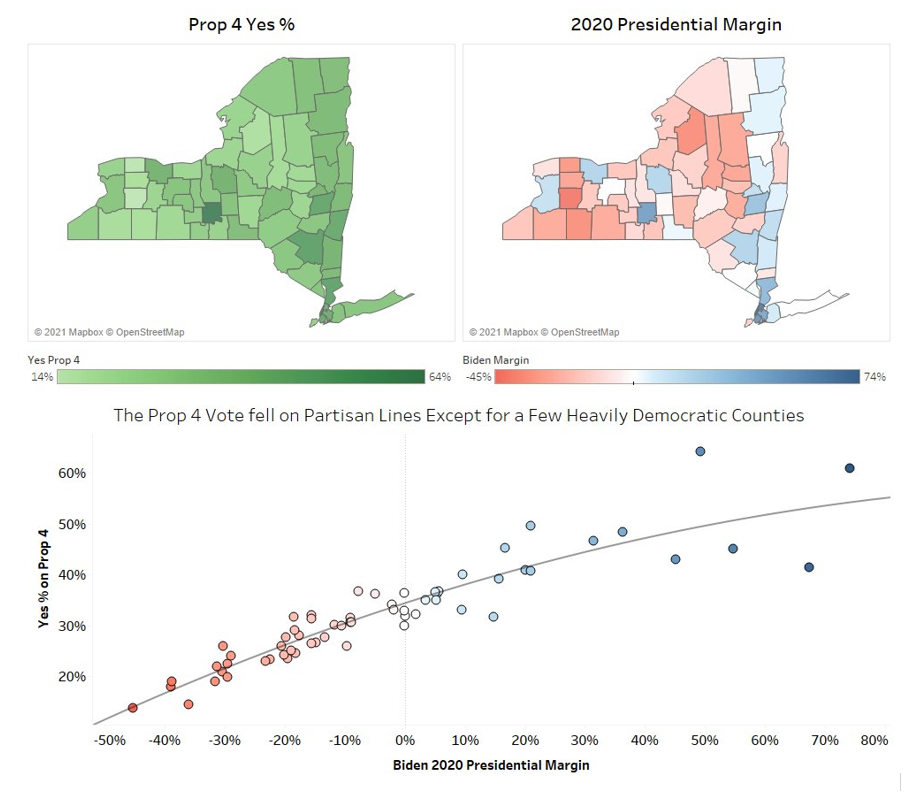 Lending more credence to the voter-education theory is that these ballot measures did not fail because all Democrats explicitly voted against them. They failed because many Democrats left their ballots blank. Over 11 percent—more than 350,000 voters—left the ballot blank for Prop. 4; those ballots were more heavily concentrated in Democratic areas. The map below plots the share of blank votes out of all ballots cast in that county. A darker orange shade corresponds with a higher share of blank ballots. 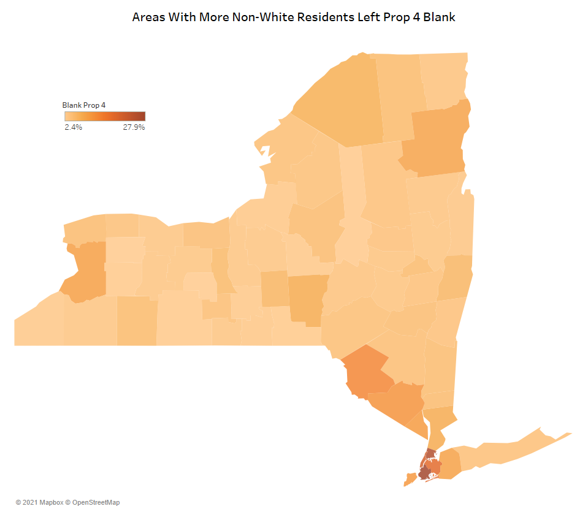 Two of the areas with the largest number of blank votes: Buffalo and New York City. More than one in four voters in Brooklyn and the Bronx left their ballots blank, and in general, areas with more white residents and Republicans had a lower share of blank ballots. In Republican Staten Island, fewer voters left their ballots blank, and only 27 percent of voters said yes to the measure. 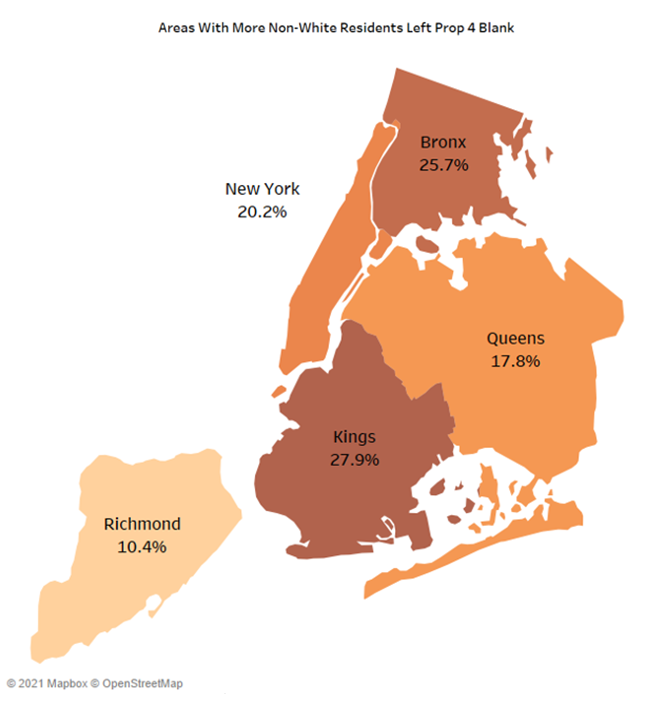 To inform their own voters about which way to vote, Republicans connected the state ballot measure to their side’s national issues. Elite cues from the state party generated steadfast opposition among their voters. Democrats had no corresponding education effort, and their voting patterns were thus more scattered. Those trying to pass ballot measures neglect voter education at their own peril.

Noah Rudnick is the director of research at Cygnal, a Republican polling firm, and writes a blog about historical election trends.

It’s Not Partisan When We Do It

It’s Not Partisan When We Do It

Will the Hispanic Rightward Turn Last?

Noah Rudnick Down-ballot primaries in 2022 should provide a sign.
More on

Nicole Gelinas Violent crime is surging on New York subways because the justice system switched its focus from enlightened prevention to post-mayhem mop-up.
from the magazine

Breachers of the Peace

Theodore Kupfer A day at the park in Astoria, Queens, can be a bucolic experience—until the biker battalions show up.
Saved!
Close