Vaccines Remain the Way Out

The fast-spreading Delta variant is now responsible for more than 90 percent of Covid-19 cases in the United States. While the recent surge of infections appears to be concentrated in places with relatively low vaccination rates, reports are emerging of hot spots in highly vaccinated parts of the country. Some point to signs of declining vaccine efficacy: breakthrough infections in fully vaccinated individuals have risen in some places to as high as 30 percent of reported cases; fully vaccinated people, once they come down with Delta, can transmit their infections to others; and while there is encouraging though still limited evidence that vaccines remain highly effective in preventing severe cases of the disease, their overall effectiveness has declined, especially in the more vulnerable elderly. Booster shots appear to be in the lineup for the fall.

But my own research—based on a recent, non-peer-reviewed study of the 112 largest counties in the U.S., encompassing 147 million people—provides strong evidence that vaccines do prevent severe disease. I determined the percent of the population fully vaccinated in each county as of mid-July, and then compared the county’s vaccination coverage with its rate of new Covid-19 cases and hospitalizations during the first two weeks of August. To be sure, lots of factors can affect Covid-19 rates, including a county’s age distribution, racial and ethnic makeup, as well as its public and private policies toward social distancing. Still, I observed an unmistakable and strong negative relationship between vaccination coverage on the one hand and case counts and hospitalizations on the other. 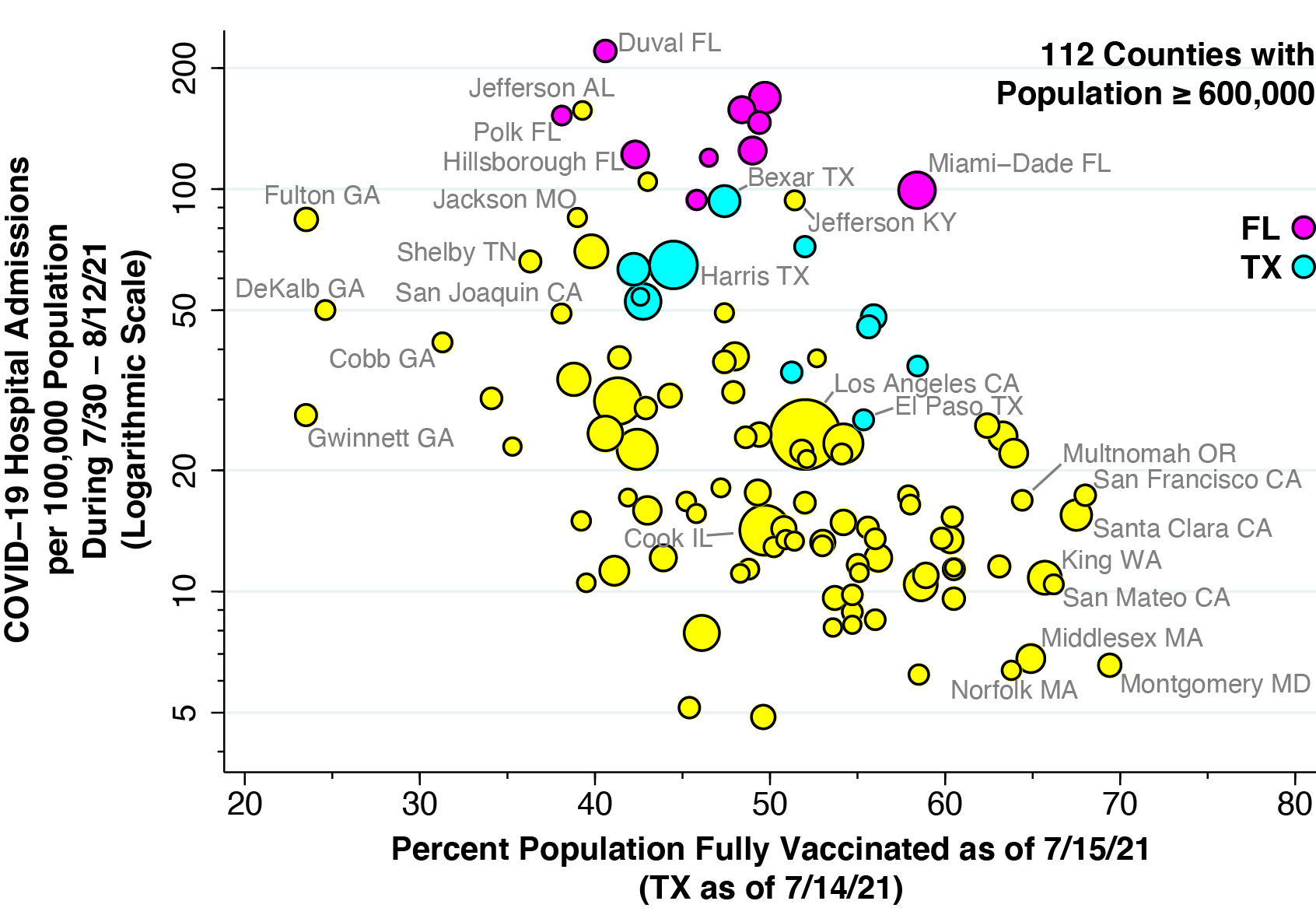 All of this suggests that a continuing, large-scale vaccination strategy could curb the recent surge. Large healthcare systems and institutions of higher education have already imposed vaccine mandates for employees and students. When Houston Methodist required its 25,000 healthcare workers to be vaccinated, more than 97 percent complied. A federal judge dismissed a lawsuit by some of the hospital’s employees, throwing out the argument that they were being coerced into participating in an experiment. Another federal judge declined to order Indiana University to suspend vaccine mandates for its 48,500 students and 10,000 faculty and staff, rebutting the argument that the FDA had given only emergency use authorization to Covid-19 vaccines. Citing longstanding precedent, Supreme Court justice Amy Coney Barrett declined an appeal.

The White House was initially reluctant to endorse vaccine mandates for federal workers. But that did not stop independent agencies like the Veterans Administration from taking such measures. The Equal Employment Opportunity Commission’s ruling that private employers can require employees to be vaccinated—subject to reasonable accommodations for medical contraindications or sincerely held religious beliefs—has opened the floodgates to a wave of mandates. San Francisco’s decision to mandate vaccinations for city workers set a key precedent for municipal governments.

These employers have imposed mandates because they share a common economic incentive: they want to head off a potentially disastrous Delta outbreak. So do the municipal governments that have followed New York City’s lead in requiring customers and employees to provide proof of at least one vaccine dose to participate in many indoor activities.

Staving off severe disease, not wiping out all Covid-19 infections, should be the goal. Breakthrough infections notwithstanding, vaccines still keep people out of the hospital and alive. As a practicing physician, I have seen as many reasons for declining to be vaccinated as I have unvaccinated patients. But as an economist, I know that these nuances of motivation are only secondary. Lots of people prefer apples over oranges for various reasons, and many others prefer oranges to apples for still other reasons. But if the price of apples relative to oranges rises high enough, they’ll switch to buying oranges. And if public policy raises the price of staying unvaccinated to a sufficiently high level, many of the hesitant will similarly get the shot.

Jeffrey E. Harris is an emeritus professor of economics at the Massachusetts Institute of Technology and a practicing physician at Eisner Health, a federally qualified community health center in Los Angeles.

Nicholas Wade Newly released emails make more plausible the contention that Anthony Fauci and Francis Collins presided over the suppression of the lab-leak theory for political reasons.
eye on the news

Joel Zinberg Nearly two years of data reveal the downside of lockdowns.
eye on the news

Vinay Prasad Throughout the pandemic, medical and scientific institutions have disseminated dubious advice, flawed studies, and even outright falsehoods.