An Update on America’s Homicide Surge

Last year, Christos Makridis and I used homicide data from the Centers for Disease Control to break down the 2020 homicide spike by geography and demographics. With another year’s worth of numbers now finalized—plus “provisional” numbers stretching into 2022—it’s time for a brief update. The CDC’s data, compiled from death certificates, are especially crucial in a year when the FBI completely failed to collect murder data from many of the nation’s police departments.

The good news is that, after spiking in 2020 and rising a little further in 2021, homicides seem to be falling again. The bad news is that this has been an extremely slow process, with recent numbers still well above pre-2020 levels, even if violence remains far from the sky-high levels of the early 1990s. 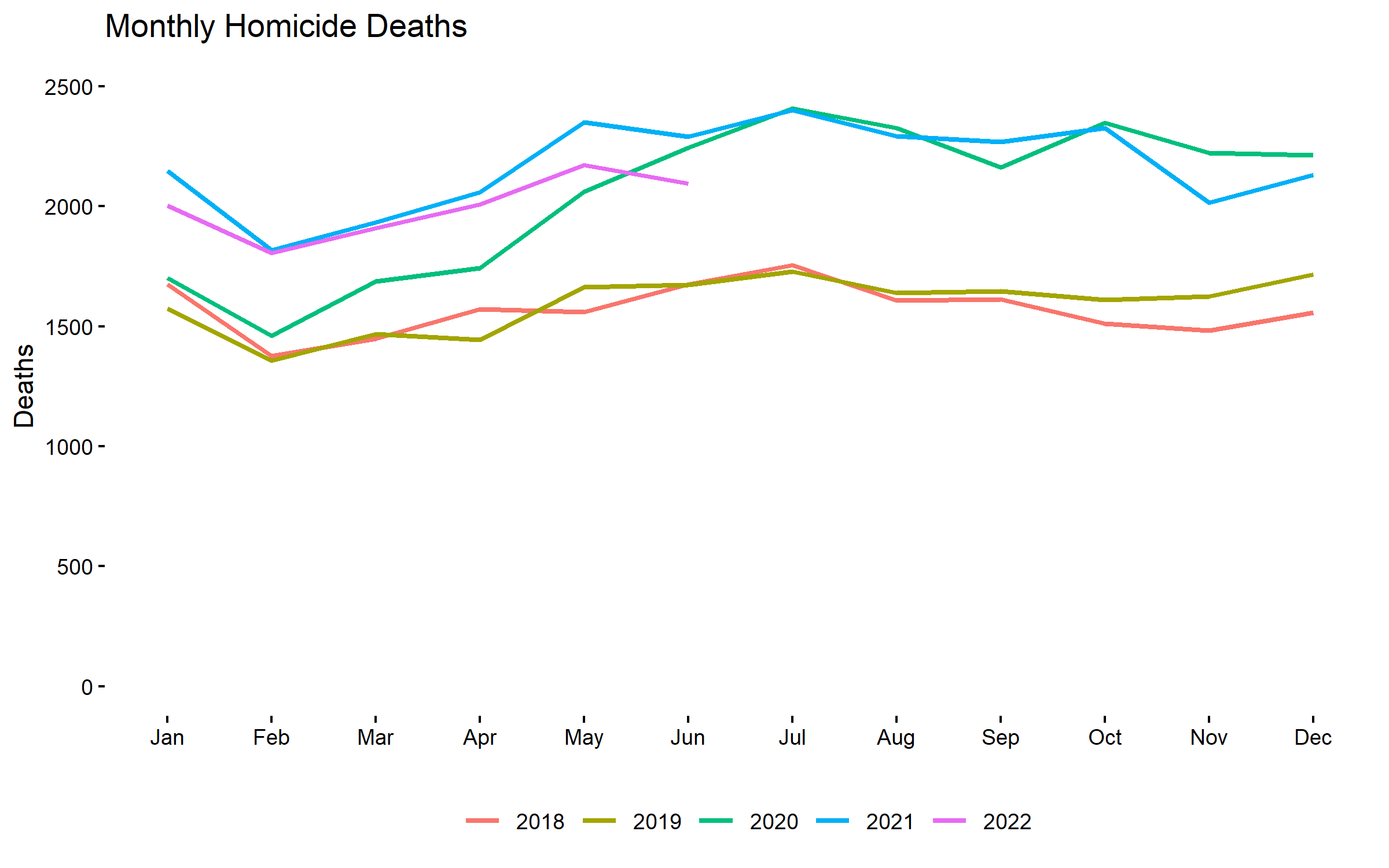 In late 2021, the totals started coming in lower than those from the previous year. Data from Jeff Asher, who compiles more up-to-date murder numbers from big-city police departments, suggest that 2022 saw about 5 percent fewer murders in those cities than 2021.

Meantime, the sociological contours of the problem have changed little. Makridis and I noted in our brief that the spike worsened existing disparities. 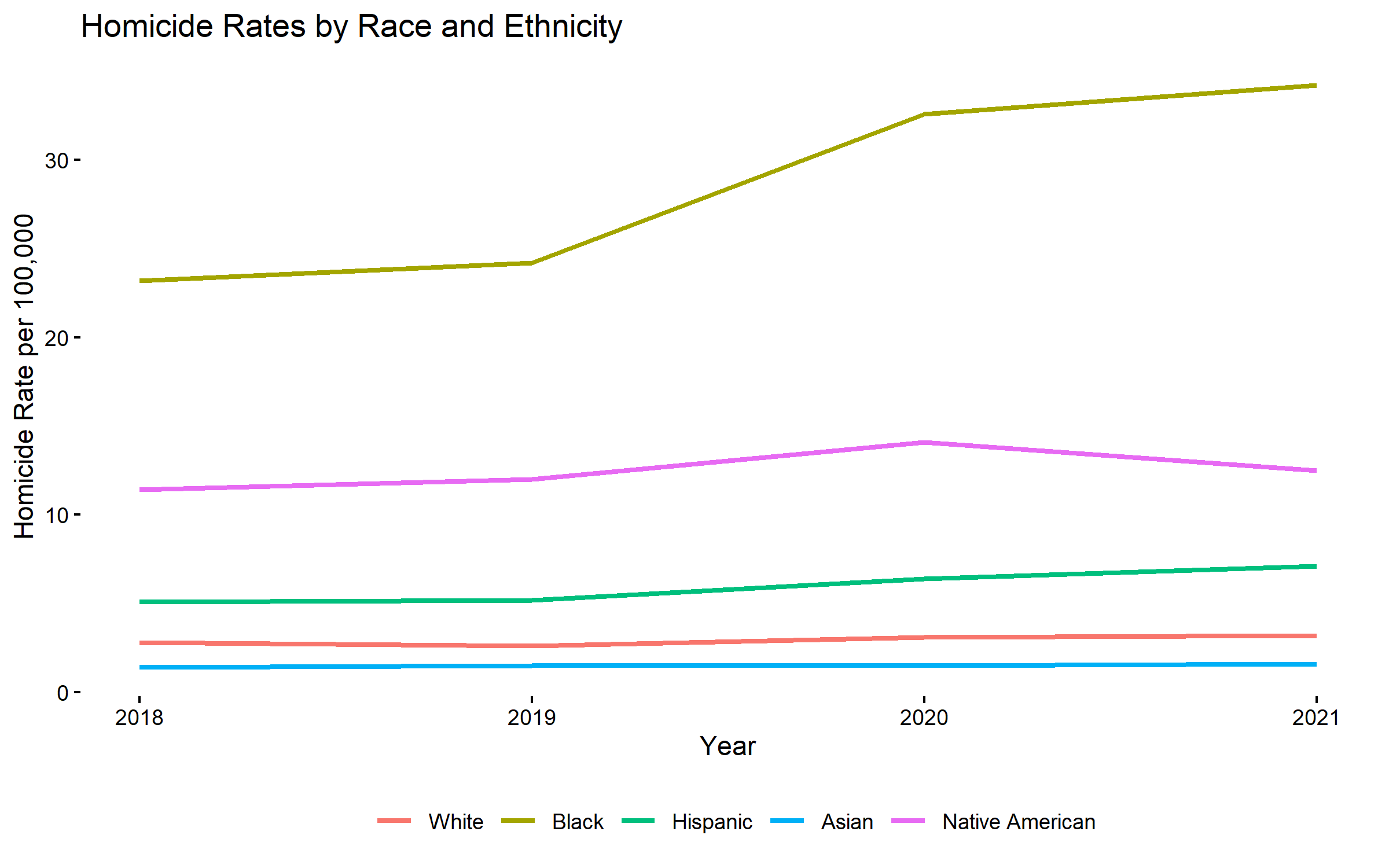 Another aspect of our brief that gained attention involved politics: Are homicide rates, as well as the recent increase in them, primarily a Republican or a Democratic problem? Some have tried to push the narrative of a “red-state” murder wave, noting that many of the highest state-level murder rates are found in the GOP South. But as my colleague Rafael Mangual recently explained, states are a poor focus for this kind of analysis. Policing and prosecution mostly occur at the local level, and crime problems in red states are often concentrated in their blue cities.

The extra year’s worth of data allows me to reiterate a few findings from our 2022 brief, this time combining the two-year periods of 2018–2019 and 2020–2021 and looking at counties with populations above 250,000 as of the latter period. The CDC doesn’t release homicide counts below ten, so smaller counties are frequently missing, and combining multiple years shakes loose some extra data by pushing more counties above the ten-homicide mark.

For one thing, overall homicide rates in both periods are positively correlated with the Democratic share of the two-party presidential vote in 2020. The later period is pictured here; the points’ sizes reflect county populations. 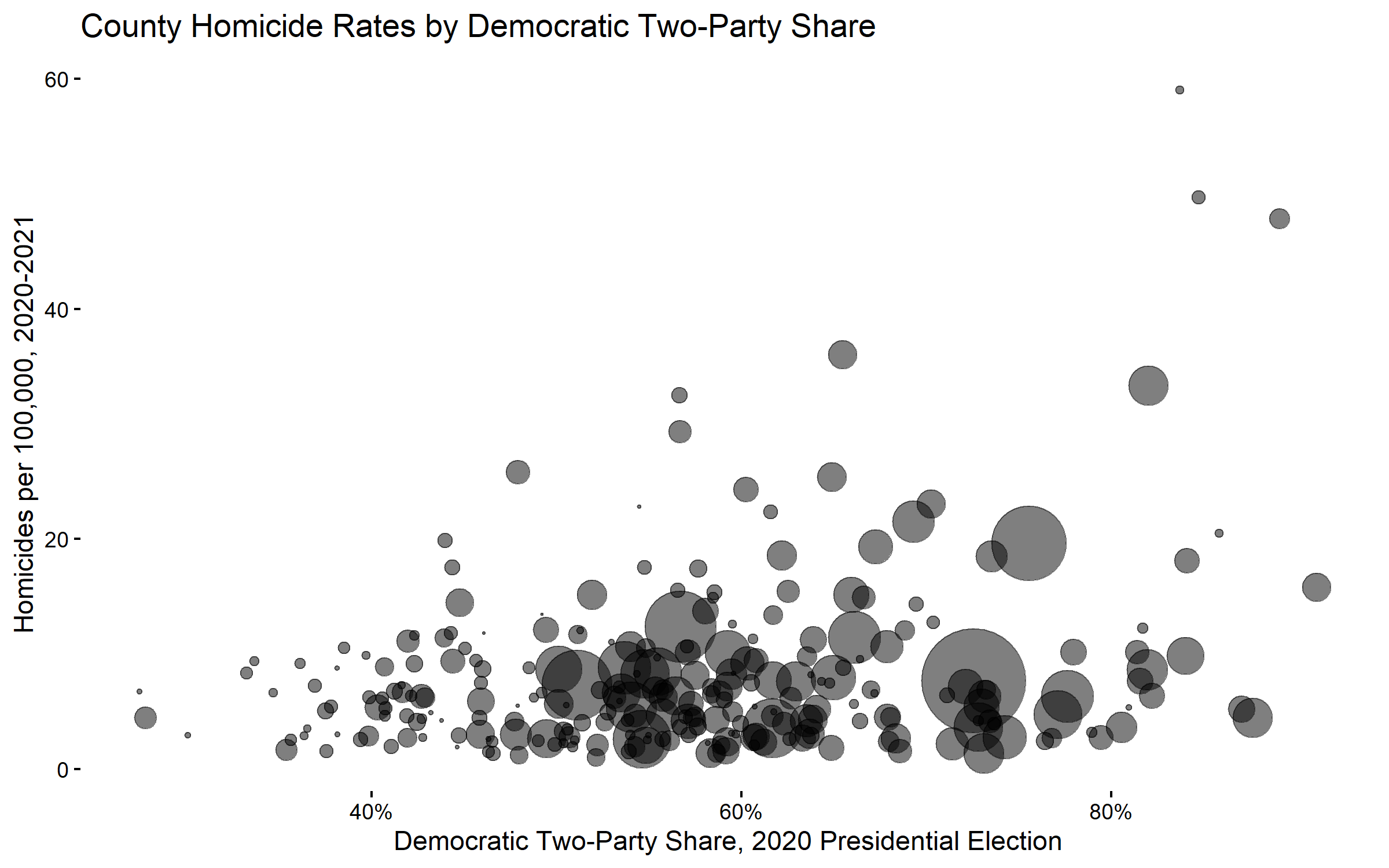 How strongly the increase between the two periods is correlated with politics depends on how you measure. Since Democratic counties started with higher homicide rates and the surge generally deepened existing disparities, it’s perhaps unsurprising that Democratic counties saw bigger increases in their raw homicide rates (that is, simply subtracting the 2018–2019 rates from the 2020–2021 ones): 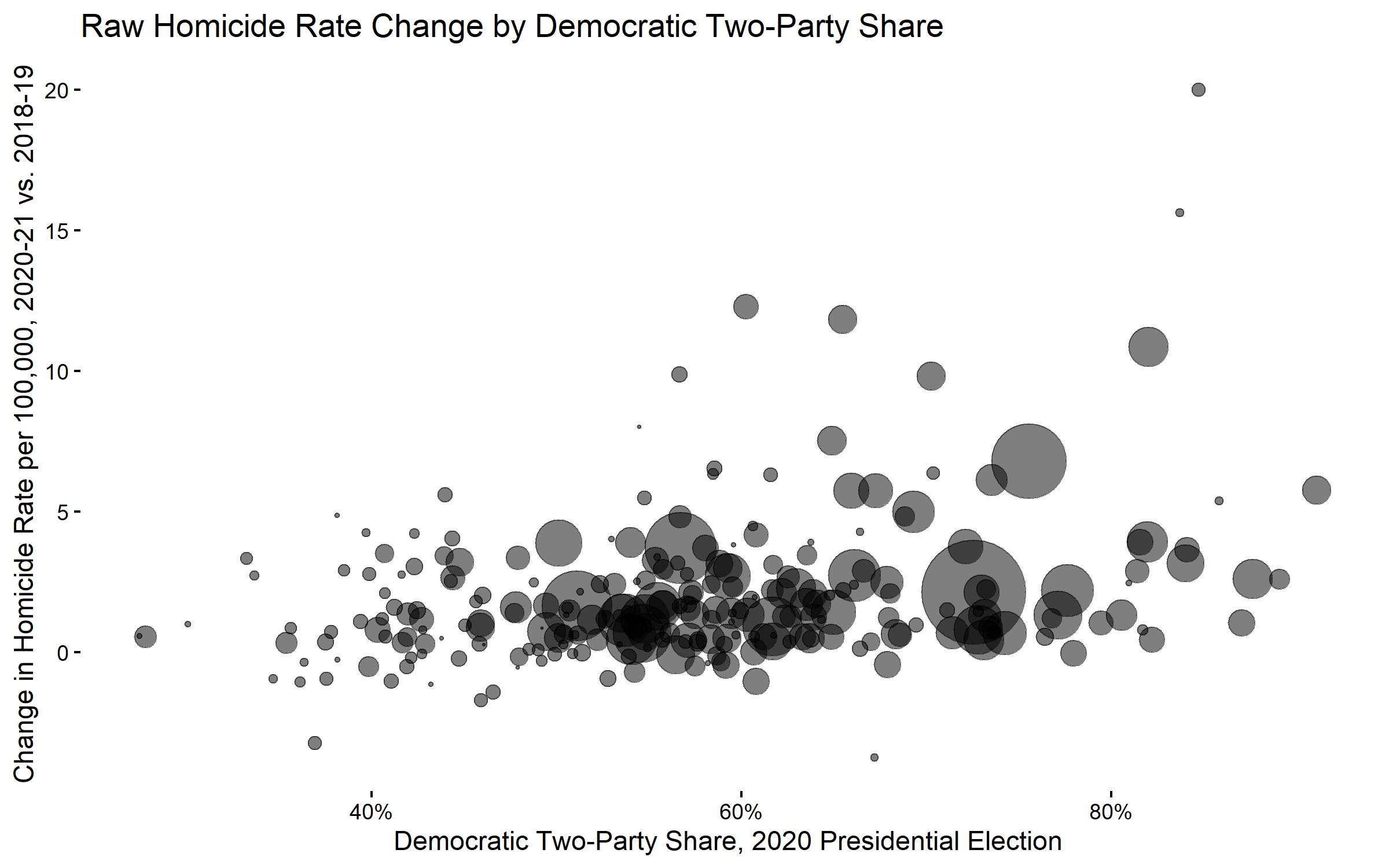 When the changes are presented in percentage increases to homicide rates, the partisan skew is a little less pronounced, if still evident: 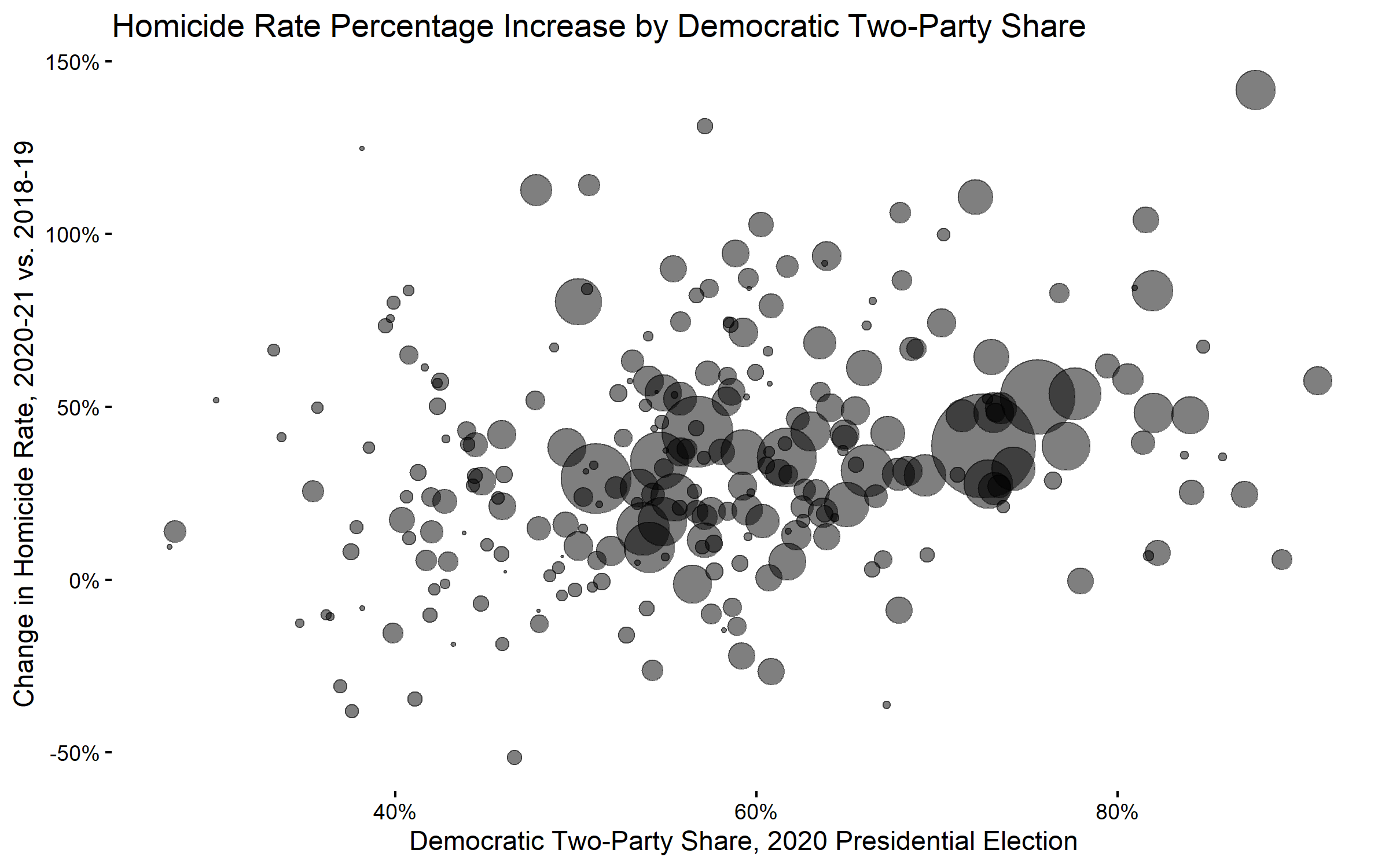 Of course, another obvious detail from the above charts is that homicide went up pretty much everywhere, including in GOP strongholds. Data aren’t available for the smallest counties individually, but the homicide rate rose about 25 percent even in places with population clusters of 50,000 or below (what the CDC terms “micropolitan” and “non-core” areas). Further, basic correlations like these don’t take us much beyond the partisan finger-pointing stage.

At minimum, though, the new CDC data show that heaping blame on “red states” still seems uncalled for. And the most pressing goal is to bring homicides rates back down—everywhere.

Robert VerBruggen A report from a new group, 97Percent, seeks common ground on gun-control legislation.
eye on the news