A wave of anti-Asian hate crimes has plagued the United States in the past few months. The media have highlighted it, celebrities have rallied against it, and Congress held hearings on it (in which I had the opportunity to participate).

When measuring the scale of the problem, commentators tend to use three pieces of evidence: individual stories of attacks on Asian-Americans; a California State University, San Bernardino analysis which showed a 149 percent increase in anti-Asian hate crimes in 2020 from 2019; and data on self-reported “hate incidents” collected by Stop AAPI Hate, an academic/activist organization.

These data sources do not offer much resolution. They confirm that 2020 was worse than 2019, and that many incidents have been reported. But they do not tell us when, during 2020, the incidents were happening.

Such timing data matter for understanding why crimes against Asians have spiked. Many have argued, for example, that the novel coronavirus, and former president Donald Trump’s use of the term “China virus” to label it, drove the increase. But if the increase in attacks does not coincide with the start of lockdowns, or with Trump’s comments, then it becomes hard to argue that what Trump said played such a role.

To assess these trends, I collected data on anti-Asian bias crimes reported to police over the past three years in three major cities: New York, Los Angeles, and San Francisco (see data note below). These three cities are home to roughly 10 percent of the Asian-American population in the United States, so even if the trends captured here may not show up elsewhere, they still tell us something about hate incidents affecting a large share of Asian-American citizens. 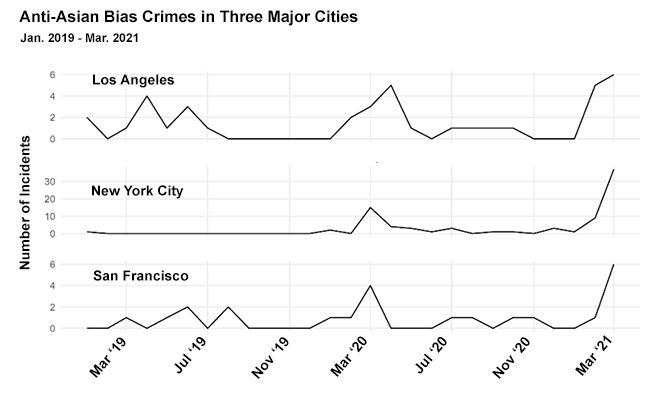 The three cities show a similar trend: in March and April of 2020, anti-Asian bias incidents spiked above prior highs, then declined. Incidents surged again in February and March of this year, eclipsing the first spike a year earlier. The absolute number of incidents is relatively low—New York has more incidents than the other two cities, a result of its much larger population—but it is the repetitive pattern that is most instructive.

These data, then, actually show two distinct spikes in anti-Asian bias incidents: a first wave, coinciding with the implementation of Covid-control policies, and a second wave, beginning this February and ongoing as of March. (Later data are not available for New York and San Francisco, but in Los Angeles incidents dropped off in April.)

It is likely that the first wave was driven by the Covid-19 pandemic, though which associated event—the virus’s Chinese origins, resentment over lockdowns, Trump’s comments, and so on—is unclear. But it’s hard to offer the same explanation for the second wave, which took place a year later, under loosened Covid restrictions, with a different president, and with Trump’s name out of the conversation. The data also suggest that the spikes are not exclusively caused by—as I previously suggested—the more general increase in violent crime, which began last summer and has persisted. This does not mean that depolicing has not played a role, and more police attention likely remains the best solution.

What, then, caused the second wave? Given that it’s hard to link it to the conditions of last March, and that there is no obvious second instigating event, it’s hard to say for sure. 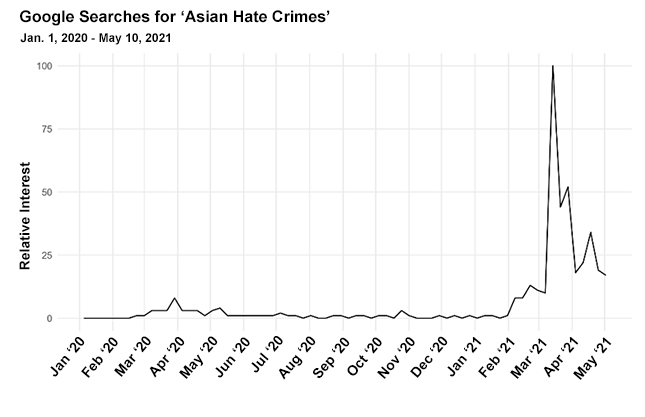 What we can say is that the second wave attracted far more public attention than the first. Data from Google Trends show that the first surge precipitated little interest, while the second garnered an explosion of attention, peaking the week of the shooting at two Asian massage parlors outside of Atlanta.

This trend likely reflects the aforementioned attention to the issue from politicians, the media, and celebrities. Given the absence of any obvious cause of the second wave, it’s worth asking: could this greater attention be a partial explanation of the increase?

There are three ways that this could be the case. One is that attention could lead to more reporting. Hate crimes are notoriously underreported. It’s possible that bias incidents never really abated but reporting of them did. Then greater attention to the issue encouraged more people to speak out. Under this theory, the “waves” are just an artifact of a change in reporting.

A second possibility is that public attention has altered police behavior. Whether an offense is labeled a bias crime is a matter of police and prosecutorial judgement. With greater political pressure on cops generally, and some arguing that the race of the victim, rather than the offender’s intent, is what matters for judging a hate crime, it is possible that police are currently more likely to label offenses as hate crimes that they might not have otherwise. The second “wave,” in other words, could be an artifact of public pressure for a wave to be so identified.

A third, more troubling, theory is that public attention can induce copycatting. We know that media coverage of suicide and mass shootings can glamorize such acts, causing more. Coverage of these crimes may unintentionally glamorize them, or could simply increase the salience of Asian targets for suggestible offenders—the seriously mentally ill, for example, who appear to be responsible for many of the most high-profile offenses.

Regardless of the underlying cause, the above data highlight a fact conspicuously absent from the current conversation. The latest spike in crimes is not, to the best of our knowledge, a continuation of a year-long trend. It is a new wave, which should be analyzed, and therefore addressed, on its own terms.

Charles Fain Lehman The Washington State Supreme Court makes it harder for cops to detain nonwhites.
eye on the news

Charles Fain Lehman The highest punishment sends a message to those deranged few who will admire his actions.
eye on the news

Yes, Policing Is Getting More Dangerous

Charles Fain Lehman The recent surge in attacks on cops reflects a broader increase in violence.
More on

Hannah E. Meyers The removal of swift consequences for criminal behavior has led to an explosion of violence for even trivial slights.
Saved!
Close