With New York City’s mayoral primary just around the corner, Kathryn Garcia and Maya Wiley are challenging Eric Adams for the top spot, while Andrew Yang is fading from the front rank, according to a June 9–13 poll of likely Democratic primary voters conducted for the Manhattan Institute.*

Adams, the Brooklyn borough president, and former sanitation commissioner Garcia are neck-and-neck as primary voters’ first choice at 21 percent and 20 percent, respectively, with attorney Wiley in third at 18 percent, followed by entrepreneur Yang at 13 percent. All other candidates rank in the single digits on the first-choice ballot. Since our poll of the race in mid-May, Garcia and Wiley have gained the most (nine points and eight points, respectively), while Yang has fallen by six points. The share of undecided primary voters has fallen by five points from mid-May to 9 percent.

On the eleventh round of a recalculated ballot under the ranked-choice system, our analysis finds that Garcia defeats Adams, 52 percent to 48 percent. While Wiley makes it to the next-to-last ballot, her voters preferred Garcia over Adams on the final round. Garcia also bested Adams among white voters on the final ballot by a margin of 44 points. 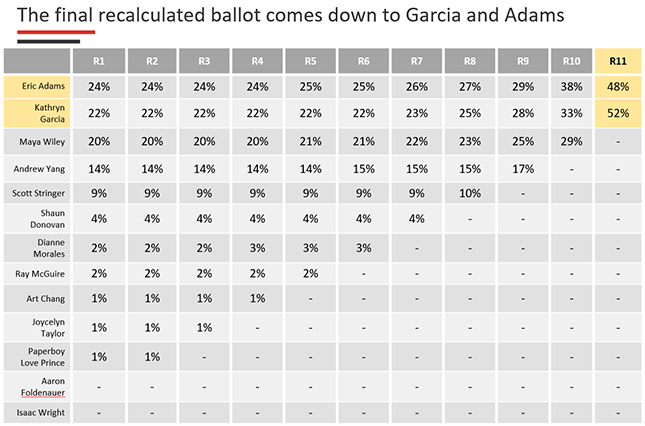 Yang’s favorable vs. unfavorable rating has slipped dramatically—down to 47 percent favorable vs. 40 percent unfavorable, from 53–29 in mid-May. Adams’s unfavorables have also risen 12 points over the past month, to 28 percent. By comparison, favorable views of both Garcia and Wiley have improved by 16 points and ten points, respectively. Garcia has the highest net favorability of all the candidates in the race, at 41 points.

On the first-choice ballot, Adams scores well with older voters, African-Americans, moderates, and Brooklyn and Bronx voters, while receiving only 9 percent support from white voters. Garcia performs better among white voters as well as with liberals, Manhattanites, higher-income voters, and Jewish voters. Wiley draws support among younger voters and the “very liberal,” who constitute a slightly greater share of this poll’s respondents than our prior May poll. Yang does best with 18–34-year-olds, “soft” Democrats, Asians, and conservatives.

When asked whose candidacies they have become more interested about in the past few weeks, voters said Garcia and Wiley. And when queried on whose endorsement affected their vote the most, likely Democratic primary voters preferred the New York Times (which endorsed Garcia) over Representative Alexandria Ocasio-Cortez (who endorsed Wiley). Voters may be paying more attention as primary day draws near: some 52 percent say that they are now very interested in the June 22 election.

Selected by nearly a third of likely Democratic primary voters, “Public safety and crime rates” tops the list of issues for New York’s next mayor, followed by housing (25 percent) and the economy (16 percent). Safety issues are paramount for Asian, Jewish, and conservative primary voters; Adams and Yang perform well on this issue. Garcia and Wiley score well on housing issues, a top priority for younger and more liberal voters. Overall, nearly half of respondents say that the city is on the wrong track—up by four points from May.

*On behalf of the Manhattan Institute, Public Opinion Strategies conducted a citywide poll of 500 Democratic voters likely to vote in the mayoral primary election in June. The poll was conducted by telephone (cells and landlines) between June 9 and 13 and has a margin of error of plus or minus 4.38 percent. Respondents were given the option of completing the interview in English or Spanish. Click here to see the full survey results.

Is the Rent Too Damn High?

Michael Hendrix Inflation is eroding Joe Biden’s ability to deliver on his main legislative achievement in office.
eye on the news

Seth Barron New York’s city council wants to bar the use of criminal background checks by landlords.
eye on the news