The recently enacted Covid-19 relief law and other bills wending their way through Congress openly favor members of certain races or ethnic categories. It’s hard to see how any of this legislation—all part of the Biden-Harris administration’s new focus on racial “equity” at the expense of equality—passes constitutional muster.

That doesn’t mean that the courts will strike them down. We have today a new, unwritten constitution—a hodgepodge of executive orders, court decisions, legislation, and conventions. Of course, we already have a written Constitution, drafted in 1787 and amended since. The cognitive dissonance of living under these two constitutional regimes is thus causing friction across society.

Consider the Emergency Relief for Farmers of Color Act, a $5 billion monstrosity that Georgia Senator Raphael Warnock snuck into the $1.9 trillion American Rescue Plan Act of 2021. The bill aims to provide payments to “Black farmers, Indigenous farmers, and farmers of color.” It includes $1 billion to address “systemic racism” at the Department of Agriculture.

The bill never says explicitly that blacks, Native Americans, or farmers who are immigrants from Latin America or their descendants should receive benefits; instead, it uses the term “socially disadvantaged farmers.” For example, it instructs the secretary of agriculture to “forgive the obligation of each socially disadvantaged farmer or rancher who is a borrower of a farm loan made by the Secretary to repay the principal and interest outstanding as of the date of enactment of this Act on the farm loan.”

Warnock’s bill explains that “the term ‘socially disadvantaged farmer or rancher’ has the meaning given the term in 19 section 2501(a) of the Food, Agriculture, Conservation, and Trade Act of 1990.” As that law explains, “The term ‘socially disadvantaged group’ means a group whose members have been subjected to racial or ethnic prejudice because of their identity as members of a group without regard to their individual qualities.” Department of Agriculture regulations also “define socially disadvantaged farmers and ranchers as belonging to the following groups: American Indians or Alaskan Natives, Asians, Blacks or African Americans, Native Hawaiians or other Pacific Islanders, Hispanics, and women.”

In other words, membership in any of these racial, ethnic, or gender categories automatically entitles a farmer to benefits, “without regard to individual qualities.” As University of Maryland professor George La Noue has written, “social disadvantage is, as a practical matter, established at birth, and cannot be challenged by evidence of a successful life.” These are the makings of a rigid caste system in America.

And Warnock’s bill is not the only farm bill explicitly channeling money to black Americans. There is also New Jersey senator Cory Booker’s Justice for Black Farmers Act. It creates a USDA agency that would buy land and grant it to eligible Black farmers. It also establishes a “Socially Disadvantaged Farmer and Rancher Bank.”

These and other bills in the works create entitlements based on race or ethnicity, not need. If the Duchess of Sussex, Meghan Markle, were to turn part of her California estate into farmland, she, too, would get federal money, as could former President Barack Obama, NBA legend Michael Jordan, and Senators Ted Cruz and Marco Rubio. It is that absurd.

It doesn’t stop with agriculture. Consider the George Floyd Justice in Policing Act, which calls for the end of racial profiling but will end up enshrining it. It does this by stating that “proof that the routine or spontaneous investigatory activities of law enforcement agents in a jurisdiction have had a disparate impact on individuals with a particular characteristic described in section 302(6) shall constitute prima facie evidence of a violation.” Those characteristics include “race, ethnicity, national origin, religion, gender, gender identity, or sexual orientation.” As former Department of Education official Hans Bader puts it, “The practical effect would be to encourage police departments to stop innocent women, Asians, and whites, just to meet quotas based on gender and race. If police departments don’t meet these quotas, they could be sued by the Justice Department or individuals they stop.”

The Biden administration is also considering setting up a commission to study reparations, perhaps the quintessential race-based policy. Reparations establish collective guilt and collective innocence and mete out collective punishment and collective rewards, nearly 160 years after the Civil War ended and the Thirteenth Amendment was ratified.

These are but the tip of the iceberg. Consider also the Recognizing People of African Descent and Black Europeans Act; the concurrent resolution urging the establishment of a United States Commission on Truth, Racial Healing, and Transformation; and the Anti-Racism in Public Health Act of 2021 (introduced by Ayanna Pressley of Massachusetts and drawing on Ibram X. Kendi’s ideas).

All of this is likely unconstitutional, violating the Fourteenth Amendment’s Equal Protection Clause, as well Titles VI and VII of the 1964 Civil Rights Act. The courts have already stated, for example, that it is unconstitutional to encourage racial quotas, which would put the Justice in Policing Act in jeopardy.

The woke Left understands that, as written and amended, the Constitution stands in the way of many of the things that it wants to do. This is why the Left has set about to cast the Constitution as illegitimate by, for example, purposely mischaracterizing the three-fifths compromise, pretending that the document perpetuated slavery, or calling it, as Kendi does, a “color-blind Constitution for a White-supremacist America.”

Will the courts strike down these laws? Or will they use them to build on the illegitimate new “constitution” of racial preferences? We will see.

Mike Gonzalez is the Angeles T. Arredondo senior fellow on E Pluribus Unum at The Heritage Foundation. He is the author of The Plot to Change America: How Identity Politics is Dividing the Land of the Free. 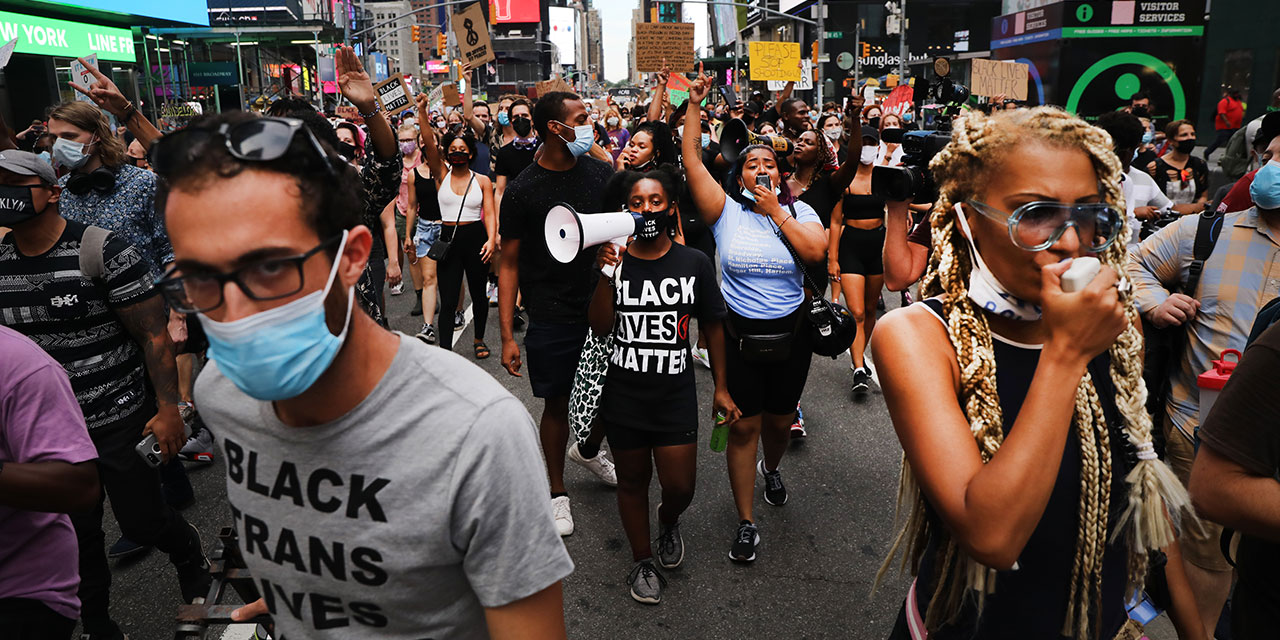 Mike Gonzalez As its Marxist pedigree makes clear, Black Lives Matter is committed to overthrowing our entire system.
More on