If, as Bruno Maçães suggests in History Has Begun, American culture has devolved into a Hollywood plot, then we have reached that place in the story when the cattle baron torches the cabins of unwelcome settlers and the Death Star obliterates the pesky rebels’ planet. Having defeated Donald Trump and stumbled on new methods of control during the Covid-19 pandemic, the elites who run our institutions are out for vengeance. The establishment is striking back.

Trump, always a volatile substance, in defeat managed to live up to the most outrageous caricatures of himself drawn by his opponents. His madcap nihilism was a happy gift to the elites. The president of the United States was thus banned from social media, using protocols developed during the pandemic to direct only “authoritative” information to the public.

Trump’s QAnon followers actually exceeded anyone’s expectations of what a lunatic fringe might behave like, then took selfies of themselves in the act of being violently bizarre. That was another happy moment. The barbarians who looted the Capitol building were declared to be not a mob but an insurgency, a sort of latter-day Whisky Rebellion—and the heart of Washington, D.C. remains occupied by a military force to this day.

When Trump won in 2016, elites insisted that he had subverted the election with Russian help. When Trump lost in 2020, the electoral process miraculously regained its virginal purity. To question the outcome became the equivalent of saying that Bill Gates had invented Covid-19. Both were simple opinions, however eccentric—and both were found to be dangerously unorthodox and thus bounced from social media.

The Georgia state legislature, controlled by Trumpian Republicans, enacted an election law that the Trump-loathing establishment condemned as an attempt to restrict minority votes. The law contains nothing particularly new, and some of the claims made against it seem dubious, but the elites in their hour of triumph were in no mood to tolerate deviancy. A vast choir of voices emanating from the White House, traditional and digital media, CEOs of major companies, academia, the social justice industry, and the usual gaggle of virtue signalers—all with remarkable unanimity and in perfect harmony—pronounced the Georgia law “unacceptable.” Punishment had to be meted out to the inhabitants. In an unprecedented gesture, Major League Baseball withdrew the 2021 All-Star Game from Atlanta. Georgians, in their shame, were unworthy of Bryce Harper.

Joe Biden doddered into the presidency with a single thought in mind: to sign as many enormous checks as his septuagenarian hand could stand. That the public would tolerate a drunken-sailor approach to federal spending was yet another lesson of the pandemic—Trump and his Republicans were eager to participate in the original binge. The economic theory behind this appears to be that government prints the money anyway, so what harm can be done if the president shovels tons of it at those he loves? No doubt we’ll get the answer in the next few years.

Today, having lost access to the money spigot, congressional Republicans have developed highly principled reservations about spending. It’s too late. They will be emasculated. The Biden bills in their bloated enormity will shower money on an entirely different crowd.

These bills have such official-sounding descriptions as “stimulus” or “infrastructure,” but as always when colossal sums get thrown around, something is bought and something is sold, and political and ideological fantasies are fulfilled thereby. The $2 trillion infrastructure bill allocates a measly $115 billion to what I, in my simplicity, understand infrastructure to be: roads, rail, and so forth. Much will be spent on “addressing climate and racial inequities.” The object is clearly to purchase a permanent majority, forever secure against madcap populists and other incursions from below—the ultimate fantasy. A trillion here, a trillion there, and suddenly you find yourself applauded by a lot of new friends.

Now, some might insist that this spree belongs to the great American tradition of partisan politics. The Democrats, not the elites, won the 2020 election and are now reaping the rewards, while Trump and the Republicans, having lost, are deservedly consigned to the wilderness. And that is true so far as it goes. But it misses the big picture: the elites in our country lean progressive and vote Democratic, but not all Democrats love the elites.

Joe Biden, a 78-year-old middling figure who had failed at presidential politics before, would never have become the Democratic candidate except as a desperate stopgap to the anti-elite Bernie Sanders. He would never have become president except for the establishment’s four-year exorcism of the anti-elite Trump. The elites got Biden where he is; elite is what he is, a man whose chief attribute is comfort at the top of the pyramid. When the CEO of Coca-Cola and the commissioner of Major League Baseball, tech companies like Google and Apple, the New York Times and Washington Post, and Bank of America and the ACLU run interference for the president on the Georgia controversy, a weird agitation of the elites is at hand that transcends party politics.

The people in charge of our great institutions fear and loathe the public. The election of Trump convinced them that ordinary citizens couldn’t be trusted with the vote. The rise of social media has persuaded them that limits must be imposed on what can be said. Aware that they lack personal and institutional authority, they will gladly settle for political power. They aim to tame the beast.

Let’s be clear: there’s no elite conspiracy, no secret gatherings in smoke-filled rooms, only a herd-like huddling of conformist minds. There’s no elite ideology in any coherent sense, only a blind impulse to control that gravitates instinctively to certain positions on certain issues. The script is always the restoration of order in a broken world.

Two common threads are apparent: the public is a bigoted and destructive monster, and only state power wielded by virtuous elites can protect this creature from itself. The politics of racial and gender “equity” entail complicated government mandates over corporate and private behavior, as well as undeviating conformity in speech and opinion policed by online inquisitors. The politics of climate change entail government control over large swaths of the economy and the demonization of skeptics as the moral equivalent of Holocaust deniers. The politics of authorized truth entail the regulation of digital platforms to ensure that algorithms deliver officially approved answers, and the red-flagging or de-platforming of opinions obnoxious to the elites. The politics of transportation entail taxing to extinction that symbol of indeterminacy, the car, while shoving the masses into predictable rail lines and bike lanes.

Faced with such a potent agenda, Republicans and conservatives have begun to discern the end of the world as we know it and the overthrow of the American way of life. A conservative friend of mine confided his fear that the Democrats, now in possession of the executive and legislative branches, would establish a “soft dictatorship” over the country. But that is simply the tenor of politics in this strange moment: the flip side to the millions of Democrats and progressives who believed that Trump was at a minimum Mussolini, if not literally Hitler. (As anyone should have been able to tell at a glance, Trump lacked the capacity to become dictator, even if he could fix his erratic mind on something that substantive, which he couldn’t.)

There will be no dictatorship. Today, as four years ago, the danger is disunion rather than domination. I lack a crystal ball to peer into the future, but I suspect that the ambitious elite programs will collide against our fractured politics and mostly fail to launch. The patchy and incoherent bits that get adopted will be embraced by Democratic-run states, which already have those programs in some form, and fiercely repudiated or ignored by Republican-run states, as, for example, New York and California did with the Trump agenda. If there’s a silver lining to all this, it’s that paralysis is a poor habitat in which to hatch Caligulas.

The elites seem remote and powerful, but they are trying to impose a structure of control inherited from another century on the tectonic forces loose in our own. They are stuck in the reactionary’s dilemma. The past was a golden age but is gone forever, while the present is a nightmare of digital rage and political nihilism and is thus “unacceptable.” The search for a way back will lead deeper into the chaos. There’s no switch to turn off the web, no time machine to the twentieth century, no script in which the dream of control doesn’t slip out of control. Reaction and revolt, like Biden and Trump, are manifestations of the same pathology afflicting our troubled age.

Following the defeat of Napoleon, the Congress of Vienna, steered by Metternich, sought to return Europe to what it had been before the French Revolution. That was the most ruthless and successful attempt in history to conquer time itself, yet the system fell apart after only 20 years. The rule of reactionaries turned out to be a zombie version of the old regime, infected by all the tendencies it wished to suppress: counterrevolution, at heart, is a tribute to revolution. The effects were incalculable. Without the Congress of Vienna, there might never have been a Communist Manifesto.

The consequences of this moment of establishment fury are also hard to predict. The elites might ride high for a couple of years. But they should remember that history resists being frozen in place. Eventually, the settlers hire a gunslinger to take care of the cattle baron and the space rebels destroy the evil empire—and the plot of the movie inexorably grinds on.

Martin Gurri is a former CIA analyst and the author of The Revolt of the Public and the Crisis of Authority in the New Millennium. 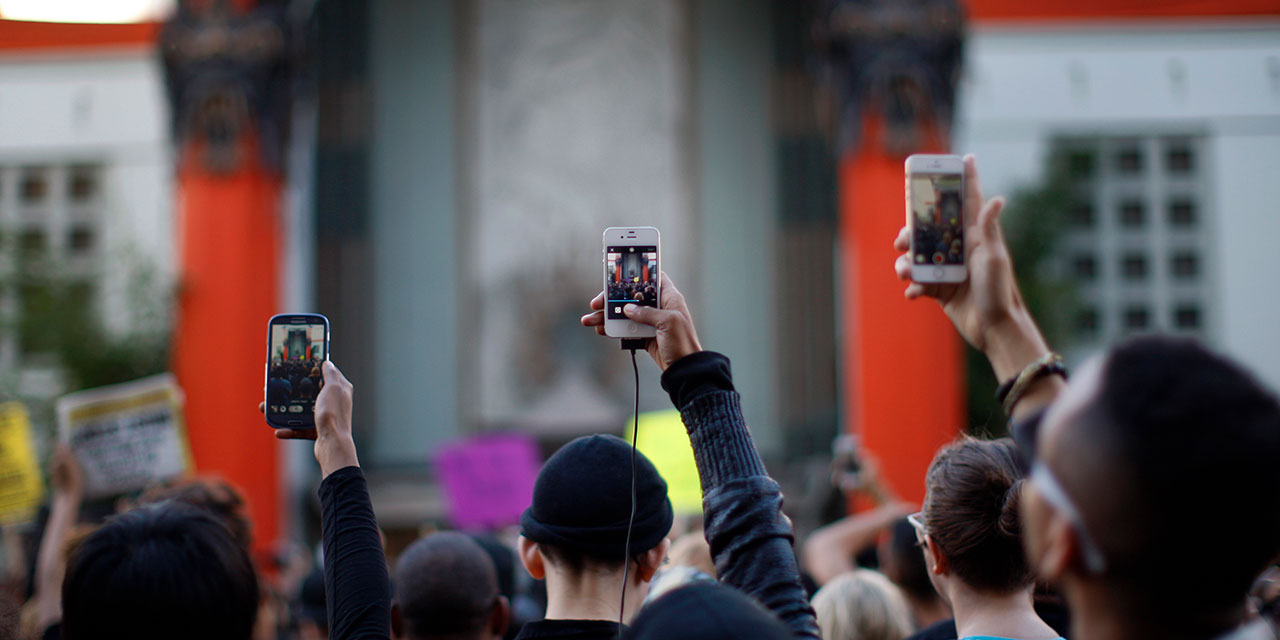 Martin Gurri Why were the protests and riots of 2020 so explosive?
More on