The new state of CHAZ has evolved. Over the past week, following Seattle mayor Jenny Durkan’s decision to abandon the Seattle Police Department’s East Precinct Building, left-wing protesters have transformed the surrounding neighborhood into the Capitol Hill Autonomous Zone (CHAZ), hoping to create a new political authority based on social-justice principles. On its first night, the new micro-state was led by the armed paramilitaries of Antifa and the John Brown Gun Club, but after preventing the return of police and securing defined borders, the CHAZ has sought to implement civilian rule.

Almost immediately, activists established a social structure based on a “reverse hierarchy of oppression”: Native American, black, and trans women are the highest authority; diversity determines individual social status; and whites are called upon to perform rituals of atonement. Through a series of speeches and community gatherings, activists have sought to implement the social theory of “decolonization,” which, in the words of Black Lives Matter activist Nikkita Oliver, means overthrowing capitalism, eliminating the structures of “patriarchy, white supremacy, and classism,” and returning the land of the autonomous zone to displaced Native American tribes.

In practice, the CHAZ leadership has taken small steps toward reversing the power structure and redistributing resources. Black and Native American speakers have been “centered” in leadership roles in all community meetings, with white audience members asked to “move past guilt or fragility” and “commit to long-term action and accountability.” At one evening event, an indigenous-rights activist with a purple bandana wrapped around his face announced a campaign for immediate small-scale reparations: “I want you to give $10 to one African-American person from this autonomous zone,” he said to a large crowd gathered on a baseball field. “White people, I see you. I see every one of you, and I remember your faces. You find that African-American person and you give them $10.”

Though activists have largely succeeded in creating a multiracial coalition, the CHAZ leaders have sometimes adopted policies of explicit segregation, with some spaces reserved for BIPOC—“Black, Indigenous, and People of Color.” Activist Marcus Henderson, an urban farmer with an engineering degree from Stanford, created a shared agricultural project in Cal Anderson Park with a sign announcing: “THIS GARDEN IS FOR BLACK AND INDIGENOUS FOLKS AND THEIR PLANT ALLIES.” As Henderson told reporters, the urban garden is a response to “the question of how Black people have been disenfranchised for so long” and a demonstration of “collective land ownership, taking back property and really making it work for the people.”

A few days after CHAZ declared independence, activists began to consider formalizing the governance of the autonomous zone. While the protesters were unified in opposition to the Seattle Police Department, competing factions have emerged within CHAZ and are now engaged in a struggle to represent the movement. Black Lives Matter activists like Oliver want the protest to focus on racial inequality and defunding the police. Socialist and antifascist groups have emphasized the radical political nature of the protests, with Socialist Alternative city councilwoman Kshama Sawant insisting that the occupation must be oriented toward the “dismantling of capitalism itself” and the progression of the “socialist revolution.” And finally, a third faction of predominantly white bourgeois young people has attempted to transform the CHAZ into a block party, with muralists, musicians, and small vendors providing entertainment with political overtones.

On June 10, with the goal of building consensus and designating leadership for the movement, protesters organized the first CHAZ People’s Assembly. After setting up a stage and PA system, one of the initial speakers raised the question of legitimate authority, asking the audience: “What’s the structure, how are we going to achieve some sort of communal hierarchy that we all feel comfortable with?” The audience booed and insisted that the movement should remain “horizontal” and leaderless. At the end of the People’s Assembly, racial-justice activist Julie Chang Shulman conceded that no leadership had been established but that the group had settled on the ideological principles of an “abolitionist framework” and “commitment to solidarity and accountability to Black and Indigenous communities.”

With this vacuum of legitimate authority, the CHAZ has failed to address the critical question of violence—and the most heavily armed and aggressive factions have become the de facto police power. Though the rhetoric of the autonomous zone emphasizes openness and freedom, the enforcers within the CHAZ have sometimes brutally opposed dissenting voices. A revolving group of vigilantes, including the “warlord” Raz Simone, has forcibly removed conservative journalists and activists; in another case, masked Antifa partisans confronted a Christian street preacher and provocateur, choking him unconscious and dragging him through the streets.

How will the CHAZ end? Seattle mayor Jenny Durkan has signaled her willingness to provide up to $100 million in funding for “communities of color” and, according to one official familiar with internal discussions, city government is considering transferring ownership of the East Precinct building to local community groups. But if the CHAZ leadership is unable to maintain the peace, city officials will be obligated to retake the zone by force. Seattle Police Chief Carmen Best has suggested that serious crimes may be occurring within the CHAZ and that officers have not been able to respond.

Sunday night, the CHAZ nearly erupted into a wider conflict. A man dressed in black broke into the Car Tender, a local business, allegedly stealing some items and setting the building on fire. The shop’s owner and a heavily armed companion put out the fire and detained the alleged thief, prompting a mob of protesters to swarm the area, break down the fence, and confront the shop owners, believing a rumor that the thief was being held at gunpoint. After a tense exchange, Raz Simone and the mob eventually chased down the alleged thief and forcibly detained him. Despite multiple calls for service, the police refused to intervene.

In the end, activists may be more comfortable in the role of revolutionaries than that of state-builders. In recent days, some have argued that the autonomous zone’s name should be changed, to the Capitol Hill Organized Protest, or CHOP—an onomatopoeia for the swift downward flight of the guillotine. Whatever name activists choose, the governance of CHAZ/CHOP reveals a key flaw in social-justice theory: in the absence of a legitimate police force, society does not become immediately peaceable. Instead, it can quickly descend into mob justice. By empowering masked Antifa activists and armed vigilante leaders such as Simone, the CHAZ is playing with fire. Unless a solution can be reached, it’s a strong possibility that this utopian experiment will end in tragedy. 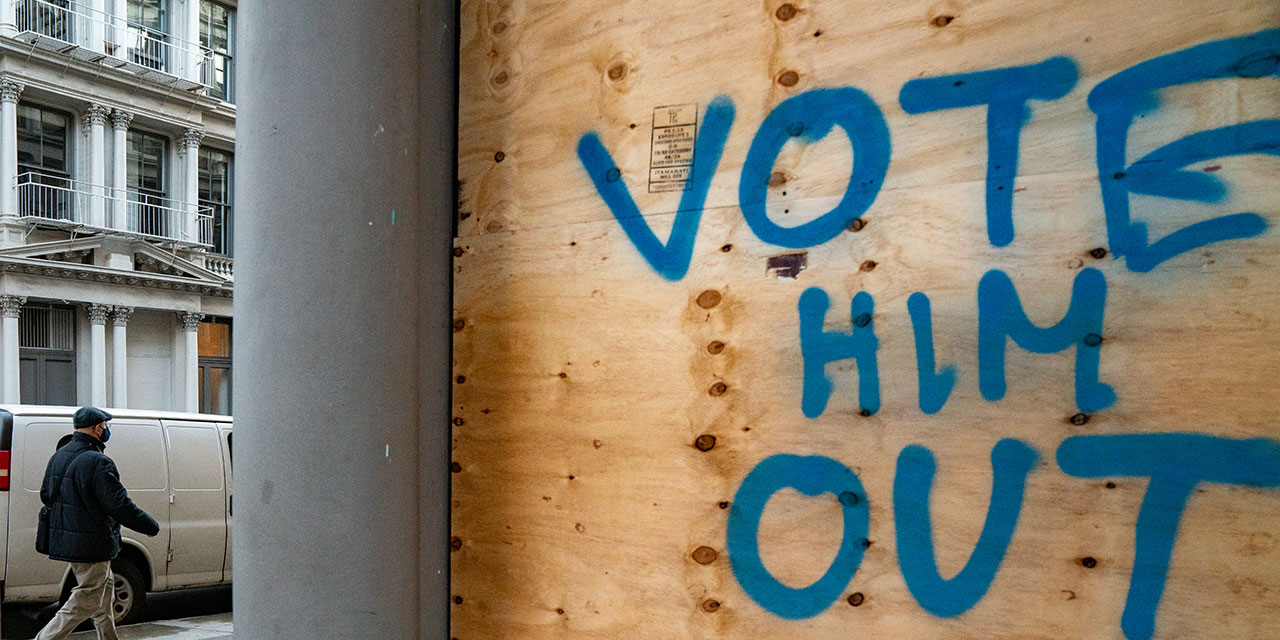 Christopher F. Rufo How the Democratic Party and its allies used the threat of violence as a campaign tactic