School closures are persisting, and not just because of Covid-19. Across the country, officials have closed schools to solve other, long-standing issues that predate the pandemic. As education site The 74 has reported, 621 schools across 58 districts announced new closures, many of which weren’t virus-related, during the last full week of November. Burbio, a data company that has monitored school reopening patterns during the pandemic, has identified nearly 1,000 school districts that have enacted temporary closures during the 2021–22 school year. Reasons for these sudden disruptions have ranged from teacher burnout to mental health and staff shortages; some officials have even justified closures by citing the need to perform “deep cleanings” of school facilities, despite scant evidence that Covid is transmitted via surfaces.

These school closures aren’t just gratuitous—they’re having political consequences. Our research suggests that if they continue, they could be devastating for Democrats in the 2022 midterm elections.

Before reviewing the data, consider the attitudes that surfaced in a Virginia focus group held after that state’s gubernatorial race. Several participants—women who lean Democratic and supported both Ralph Northam in 2017 and Joe Biden in 2020 but voted for Glenn Youngkin in 2021—cited school closures as their main motivation for supporting Youngkin. As many parents saw it, the so-called laptop class was insulated from the costs of prolonged school shutdowns, while those parents who work outside the home struggled to balance their own jobs and their kids’ education. As The Intercept reported:

The anger [these voters] felt at Democrats for the commonwealth’s COVID-19 school closure policy became further evidence of a cultural gap between these working people and Democratic elites, who broadly supported prolonged school closures while enjoying the opportunity to work remotely. . . . One Latina woman talked about how remote school foisted so much work on parents. . . . As she put it: “They asked us [parents] to do all this work for months and then [McAuliffe] says it’s none of our business now.”

What are the political consequences of this frustration? Across Virginia’s 132 school districts, we examined Youngkin’s performance relative to Donald Trump’s in 2020, in an effort to assess the effect of district school closures. As the figure below clearly shows, school closures were associated with significant movement toward the Republican candidate. In districts with local public schools open for less than a full month of in-person learning, Youngkin outperformed Trump by nearly 2 percentage points. When we controlled for other factors that could explain Youngkin’s overperformance—such as the percentage of the eligible electorate that is white in each school district and the district’s baseline level of support for Trump in 2020—the margin narrowed, but school closures still explained anywhere from one-half to one percentage point of Youngkin’s overperformance in a given locality. 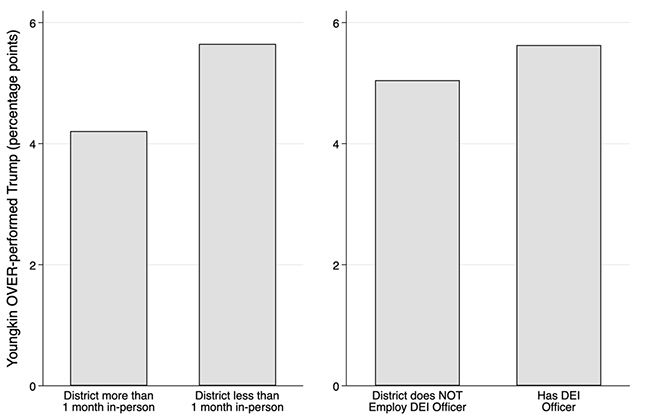 We also found the importance of closures even appeared to exceed that of districts’ “diversity, equity, and inclusion” agendas (quantified with proxy indicators, such as whether a district’s mission statements prioritized equity issues and whether it formally employed a DEI officer). Though these issues certainly helped shape the Virginia election, closures appeared to have a stronger effect on voting patterns.

Parental frustrations aren’t likely to abate anytime soon. First, the negative effects of remote learning on students’ well-being may persist. A recent study by economists with the National Bureau of Economic Research found steep declines in student learning during the 2020-21 school year; districts that relied more heavily on remote learning saw the steepest declines of all. And parents don’t need studies to know that school closures have been a policy failure.

Second, public schools are still far from their pre-pandemic normal. Public school schedules remain in flux—to say nothing of polarizing debates over masks and vaccine mandates. Virginia has been at the center of a wave of “mental health” closures: Burbio reports that nearly 10 percent of school districts in the commonwealth have curtailed in-person learning days to appease school employees. It’s a trend not isolated to the Old Dominion. San Diego Unified School District recently announced that it, too, would close schools for a mental health break, prompting protests.

Republican and Democratic politicians don’t agree on much these days. But the GOP’s resounding victory in last month’s off-cycle election has led to a rare point of agreement: parents will be a key constituency in 2022 and 2024. Neither party can afford to ignore families who want to return to the pre-pandemic normal. And whatever school administrators may believe, “normal” means brick-and-mortar school buildings functioning again in the old way.

Michael Hartney is a professor of political science at Boston College, where Renu Mukherjee is a doctoral student.