Richard Jewell, Clint Eastwood’s drama about the security guard falsely accused of bombing the 1996 Olympics, opened Friday in over 2,500 cinemas to a dismal box office of $5 million—one of the worst debuts in the iconic actor and director’s career. With luck, word of mouth will overcome this poor debut. Despite one serious misstep, Eastwood’s film about the power of the Federal Bureau of Investigation, aided and amplified by the media, is a brilliant, emotional gut punch that raises important questions about the unfettered power of law enforcement, especially the FBI.

The Centennial Park bombing on July 27, 1996, killed two and wounded 111 people. Jewell, the private security guard on duty that night, initially spotted the military-style backpack filled with explosives and nails and sounded the alarm that helped save hundreds of lives. But three days after being hailed as a hero, he saw his life, and that of his mother, Barbara “Bobi” Jewell, upended by an FBI leak to an Atlanta Constitution-Journal reporter identifying him as the bureau’s prime suspect. At the time, the AJC’s banner-headline story, triggering his reversal of fortune, was accurate—Jewell was indeed the bureau’s leading “person of interest.” And yet the FBI, the press would later learn, had no credible evidence linking Jewell to the plot. His alleged guilt was based largely on a profiling theory that the bomber, like Jewell, was a frustrated wannabe law-enforcement official seeking attention, a loser/loner who lived with his mother in a cramped apartment in Atlanta. Though the FBI concluded within days that Jewell was not the bomber, 88 days passed before it exonerated him; the film explores what happened in between. The actual bomber, Eric Rudolph, was eventually caught and convicted in a plea deal in 2005. Two years later, Jewell died at 44.

Eastwood and his gifted veteran screenwriter Billy Ray rely heavily on Marie Brenner’s 16,000-word Vanity Fair profile of Jewell, “American Nightmare: The Ballad of Richard Jewell.” They also draw on The Suspect, a 2019 book coauthored by former U.S. Attorney Kent Alexander, who was involved in the investigation, and former Wall Street Journal editor Kevin Salwen, who helped cover the bombing. Published in February 1997, Brenner’s article savaged Louis Freeh’s FBI for running roughshod over a suspect’s civil rights and privacy, and the print and broadcast media that rushed to judgment and generated a frenzy that nearly destroyed him. Several dialogue scenes from her famous story appear almost verbatim in the film.

Given Eastwood’s libertarian politics and the film’s focus on abuses by the FBI and the media—two of Donald Trump’s favorite targets—Richard Jewell has already sparked controversy and criticism that it reinforces a political agenda. This, in my view, is misguided. The film’s power resides not in its politics but in its frank portrait of an individual under pressure from an unscrupulous law-enforcement agency that few who have not directly experienced it can imagine. Eastwood gives an unstinting look at what can happen to an odd but ordinary individual who stands falsely accused. Above all, the film is about justice—and the lack of it—or, as Brenner wrote in 1997, how the misguided investigation of Jewell and the media hysteria around it became the “epitome of the false accusation.”

In an interview and an introduction to a new collection of her essays about Jewell and other similar victims, Brenner said that she has remained haunted by Jewell’s saga and those it touched 23 years ago. So, too, apparently, was Eastwood, who told her when they met on set in Atlanta that he had long yearned to make a film about Jewell. As the New York Times noted, while Eastwood has directed several films about extraordinary men facing equally extraordinary challenges—Sully and American Sniper come to mind—his focus in Richard Jewell concerns the travails of a peculiar, often pathetic, and unremarkable man caught in a web spun of government incompetence, media carelessness, ambition, and unregulated power. It’s not surprising, then, that Eastwood’s favorite film is The Ox-Bow Incident, the classic 1943 low-budget Western, directed by William A. Wellman, about the lynching of an innocent man suspected of cattle rustling and the dangers of mob justice.

Ray, the screenwriter, is also no stranger to these themes. In 2003, Ray wrote and directed Shattered Glass, the understated drama chronicling how Stephen Glass fell from journalistic grace after colleagues discovered that almost half his articles for The New Republic were fabricated.

In Richard Jewell, almost every member of cast delivers a memorable performance, none more so than Paul Walter Hauser as Jewell, whose flawless portrayal of a complicated figure is worthy of an Oscar. Kathy Bates plays his devoted, supportive mother. Sam Rockwell is a superb Watson Bryant, Jewell’s hyperactive, anarchistic lawyer, and Jon Hamm is the quintessential FBI agent—smooth, self-assured, and in way over his head. Olivia Wilde plays controversial reporter Kathy Scruggs, who breaks the Jewell story. Eastwood’s steady directorial hand rarely wavers.

The film is almost as tough on the media as it is on the FBI. Indeed, the film’s only overreach is its depiction of the press as the FBI’s enthusiastic accomplice in practically ruining Jewell’s life. Eastwood and Ray rely heavily on Brenner’s examples and her palpable fury over what became known as the “Jewell syndrome,” the media’s rush to judgment in their frenzied search for scoops. Some 30,000 law-enforcement officials were in Atlanta for the Olympics, Brenner notes, along with nearly 10,000 athletes and coaches and roughly an equal number of journalists—150 to 200 of whom were constantly staking out the Jewells’ apartment after the story broke. In the Brenner article and in the film, reporters yell questions at Bobi as she walks the family dog: “Did he do it?” “When will they arrest your son?” And, as Brenner reports: “You deserve to die, fat pig.”

After the AJC broke the story on Jewell, the accusation led all three network evening newscasts, and PBS. Mike Wallace of CBS’s 60 Minutes told Jewell that he should lose weight. NBC’s Tom Brokaw, once Bobi’s favorite anchorman, is shown telling millions of viewers that the police “probably have enough to arrest him right now, probably enough to prosecute him, but you always want to have enough to convict him as well. There are still holes in this case.” Bobi was crushed by these comments, Brenner reports.

Many reporters undoubtedly erred in their overzealous coverage. But Eastwood and Ray further demonize the press—at least women reporters—by implying that Scruggs got her scoop by sleeping with the FBI’s lead agent in the investigation. Brenner’s article never makes that accusation; nor do the authors of Suspect. Ron Martz, the AJC reporter who covered Jewell and shared a byline with Scruggs, defended Scruggs as a flamboyant but hard-charging reporter whose scoops came from her deep knowledge and persistent coverage of the Atlanta police. “When she went after a story she did what was necessary to get the story, within legal and ethical bounds,” he said in an AJC story published shortly before the film’s release.

Since Eastwood rarely gives interviews, and Ray was unreachable, it’s hard to know why the two men decided to insert such a misogynist trope about women journalists in their otherwise sensitive docudrama. Yes, some women reporters have been caught and shamed for sleeping with their sources—a violation of journalism ethics for which women, rather than men, are usually held accountable. Scruggs, however, died in 2001, and cannot defend herself or her reputation. The AJC hired Martin Singer, a Hollywood celebrity lawyer not usually known for his First Amendment litigation, to represent the paper in this matter. Singer has threatened Eastwood and Warner Brothers with a defamation suit unless they add a prominent disclaimer about the charge in the film credits.

So far, Warner Brothers has refused to do so. In his first comments about the controversy in Deadline, Ray defended “every word and assertion in the script” and lambasted the paper for failing to acknowledge, even belatedly, its role in destroying Jewell. The film, he said, had given the AJC a chance to admit its “misdeeds.” The paper had launched a “distraction campaign,” he said. “They focus solely on one single minute in a film that’s 129 minutes long . . . The film isn’t about Kathy Scruggs. It’s about the heroism and hounding of Richard Jewell, and what rushed reporting can do to an innocent man.”

The sexism controversy notwithstanding, the film’s main target is the FBI and rogue law enforcement. Eastwood has ample company on both sides of the political aisle. Many Democrats have never forgiven former FBI director James Comey for his pre-election press conferences about the bureau’s investigation of Democratic presidential candidate Hillary Clinton. If Democrats blame the FBI for Clinton’s loss, Republicans have found similar fodder in the Justice Department’s Inspector General report on Russian meddling in the election. While Inspector General Michael Horowitz concluded last week that the FBI investigation of senior Trump campaign officials was legitimate, the report contains often-disturbing information about the bureau’s 17 errors of omission, commission, and reckless conduct during its probe. Among the most shocking findings concern Carter Page, a Trump campaign official whom the FBI wished to surveil. In 2016, the bureau sought approval from the secret court to spy on Page, even though he was already communicating with the Central Intelligence Agency about meetings with Russian officials. The report also recommends that at least one agent be investigated criminally for altering emails provided to the secret court.

The list of FBI abuses is long and bipartisan. If Eastwood’s film helps spur public outrage about the FBI’s conduct and the need for prompt reform, so be it. But one disgraced bureau leader is getting Hollywood’s help in his resurrection campaign. Ray is now directing a miniseries adaptation of A Higher Loyalty, Comey’s memoir, with Jeff Daniels playing Comey. Reforming the FBI may once again prove elusive. 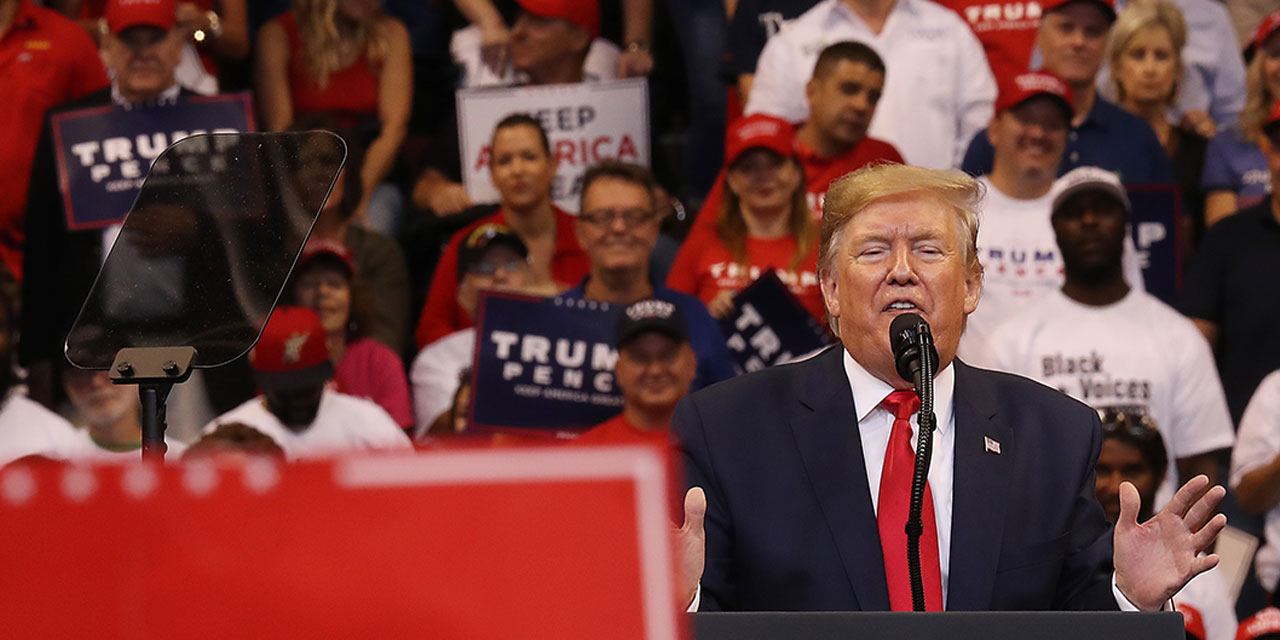 Judith Miller With an eye toward the approaching campaign, President Trump tests new political moves at home and abroad.
More on