You can’t judge a book by its release date. Coming at a time when the direction of right-wing politics in America is the subject of fierce intellectual, institutional, and personal dispute, Matthew Continetti’s latest book would certainly be an opportune occasion for a sustained argument via historical analogy: this or that faction in today’s internecine right-wing warfare is doomed to failure or destined for success, just as their forebears once were. But Continetti, a senior fellow at the American Enterprise Institute and Washington Free Beacon columnist, has written a book that succeeds more straightforwardly as a definitive work of intellectual history—framing the American Right’s current situation as the latest stage in a long process during which conservatism went from being a default condition of American political life to the rehabilitative project of a counter-elite of intellectuals to a mass movement that united both alienated voters and alienated elites.

The choices he makes in the construction of that history suggest certain arguments. Continetti begins not in the aftermath of World War II, when National Review and attendant institutions organized around opposition to Rockefeller Republicanism and began to define a package of ideas that one could call “conservative,” but in the 1920s, when Warren G. Harding and Calvin Coolidge paired a hands-off approach to business with protection for domestic institutions and patriotism with foreign policy restraint. When its political leaders took those positions, and when its intellectuals expressed skepticism of the utility of democracy, the American Right of the 1920s resembled the national populism of today. When those leaders defended their conservatism as a continuation of normal American life with temperate and persuasive rhetoric, it didn’t. Undone by events in any case, conservatism found itself in the intellectual wilderness between the Great Depression and the New Deal, its politicians too out of touch with the popular mood and its intellectuals too self-consciously marginal to command mass support. But the ideas circulating on the American Right in the 1920s shaped the movement that would come after—an important adjustment to the canonical mythology of the conservative movement that tends to begin after World War II.

Continetti makes another modification to this narrative when he shows that the rise of the conservative movement did not owe simply to the development and dissemination of ideas. Postwar movement conservatism began as a renegade project of intellectuals seeking to unwind the New Deal and purge the Republican Party of its Rockefeller moderates; it would become an ideological factory for Ronald Reagan, the most popular American president since FDR. It could do this because its principal figures actively engaged in politics and events. The movement, however, has long privileged the force of its ideas, which allegedly drive history and explain Republican political success. Such a view can do little to explain contingencies like the 1962 hotel meeting called by the American Enterprise Institute’s then-president Bill Baroody, in which William F. Buckley, Jr., Barry Goldwater, and Russell Kirk agreed to take on the John Birch Society’s Robert Welch and helped clear the way for Goldwater’s presidential run. Ideas certainly matter, but they can’t always explain why things happen as they do.

Continetti’s book weaves together major events in American political history with portraits of various intellectual and political figures. It offers a compelling analysis of the past failures and enduring difficulties of the Right on racial issues. Lacking a systematic account of why historical events happen, it sometimes leaves unexplained the reasons certain factions waxed and waned. But a persistent conflict drives Continetti’s narrative: that between populism and elitism.

Perpetually sensitive to charges of being insufficiently right-wing, elite factions often policed their rightward flank by attacking it on grounds not of morality but of tactics. Richard Nixon preserved his credentials on the right in a 1954 speech by reframing the dispute about Joseph McCarthy, who had the right enemies but was “making it easier on the rats” he sought to destroy. Goldwater advocated against George Wallace’s 1972 presidential candidacy not because Wallace was odious but because a vote for him would aid the Left. And Continetti himself engages in this maneuver, writing that while one populist surge “reinforced the sense” among conservatives that they were “participating in an embattled counterrevolution,” these figures had actually embraced “demagogy [that] pushed the political system to its limit,” endangering their cause “by associating it with crackpot theories and embarrassing theatrics.” Name that culprit.

The tension between populism and elitism becomes more urgent as the book proceeds. In the 1960s, National Review’s Frank Meyer and Brent Bozell sparred over whether freedom was worth defending on its own terms, or only inasmuch as it served the cause of virtue. (Not only Bozell but George W. Bush anticipated today’s call for a politics of the common good, with the 43rd president advancing before the Iraq debacle a “fleshed-out philosophy of government activism in the service of moral ideals” informed by religion.) By the 1970s, the fight had moved to the domain of mass politics. “Conservatism was becoming more political, more topical, more journalistic, less philosophical, and above all more populist,” Continetti observes, led by a network of activists who called themselves the New Right and opposed “compromise, gradualism, and acquiescence in a corrupt system.” Phyllis Schlafly and Richard Viguerie questioned the alignment between elite conservative organs and their alleged constituents, who were motivated by social, moral, and religious causes.

If these groups had anything in common, it was the feeling that they were besieged on all sides. When Buckley founded National Review, he attacked the intellectual establishment that ran “just about everything.” When journalists and academics united with the Democratic Party to portray Goldwater as a dangerous extremist, Meyer lamented the formidable opposition of the “mass communication network.” Talk of a distributed conspiracy perpetrated unconsciously by the organs of academia, entertainment, and media is popular on today’s dissident Right, but the idea is far from original. 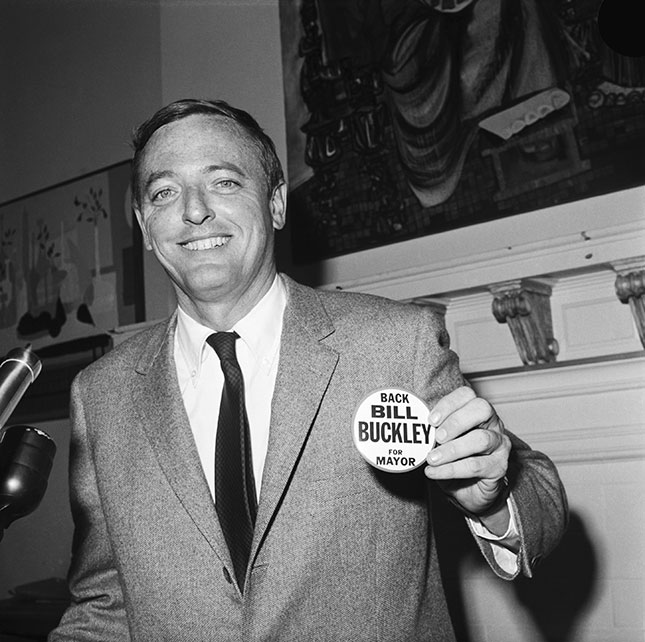 Yet a stable synthesis between elite and populist right-wing politics remained elusive. Since 1920, factions on the right have sought to embody true conservatism by defining themselves against their enemies, who are deemed unfit to carry the banner. Consider the battle between traditionalists and neoconservatives, which intensified in the 1980s. Having once identified as anti-Stalinist socialists but moved to the right as the country was dragged to the left, neoconservatives such as Irving Kristol brought the political skills they learned from old scraps, the credibility that came with their association with mainstream institutions, and a degree of policy sophistication rooted in emerging methods of social science. Traditionalists such as Patrick J. Buchanan criticized them as impostors who had accommodated themselves to the state and embraced an interventionist foreign policy, perhaps because their loyalties lay elsewhere (in, say, Tel Aviv).

“Neoconservatives believed that they were defending liberalism, not negating it as more traditional conservatives sought to do,” Continetti writes. Paleoconservatives such as Sam Francis, meantime, saw the expansion of the state as a world-historical “revolution of mass and scale” that threatened, in Francis’s words, to “challenge, discredit, and erode the moral, intellectual, and institutional fabric of traditional society.” A conservatism that seeks to conserve only the liberal institutions erected by the Founders, in this view, is unprepared to reverse the relentless leftward march of American society and doomed to play court jester forever.

Today, the populist–elite conflict breaks down along slightly different lines. Figures from both camps agree that progressive control of major institutions is pathologizing dissent and irrevocably transforming the national culture. But populists view elite conservatives as complicit in enabling this transformation and regard the muscular use of state power as the best possible way to resist it, while those elites who still retain an affiliation with conservative causes lament the loss of skepticism about state power and the tactically counterproductive measures undertaken to arrest progressive gains.

Nevertheless, after retelling Donald Trump’s stunning rise and disastrous fall—all while doing more than most populists to give populism its due and establish its importance to the American Right—Continetti seems finally to declare his affiliation with populism’s critics in a way that will likely earn him their rebuke. Trump, he argues, exposed a mismatch between elite priorities and mass concerns for which the elites are certainly culpable, but his dominance of the Republican Party and the conservative movement must be stopped. “A conservatism anchored to Trump the man will face insurmountable obstacles in attaining policy coherence, government competence and intellectual credibility,” Continetti writes. Citing Buckley, George F. Will, Friedrich Hayek, and Harvey Mansfield, Continetti concludes that “what makes American conservatism distinctly American” is its “preservation of the American idea of liberty and the familial, communal, religious, and political institutions that incarnate and sustain it.”

Is such a restoration possible? Continetti is too astute a historian to be optimistic. Conservatives’ alienation from mainstream institutions makes the rare opportunities to feel renewed pride in themselves and their country all the more attractive. History indicates that any attempts to criticize figures such as Trump on moral grounds or for insufficient ideological rigor will be self-defeating. Still, Continetti’s structural account of conservative power also suggests another possibility. American conservatism receives its political potency from median Americans sick of progressive overreach. It endures as a necessary corrective, a stubborn expression of democratic sentiment that erupts every time a faction gains institutional dominance and wields it irresponsibly. Trump’s chaotic, narcissistic behavior—and the continuing dedication of Republican and conservative factions to him and his obsessions—constitutes its own kind of overreach, one that risks alienating the broad middle of Americans with whom the party would otherwise find much affinity. Trump may continue to exert an influence on the right for years to come, but his growing disconnection from the concerns of such ordinary Americans provides reason to believe that a more sober conservative politics can one day emerge.

Does Information Still Want to Be Free?