Observers have been puzzled to see Russian troops advancing into Ukraine without attaining air supremacy. Even as the Russian army threatens to encircle Kyiv and Kharkiv, Ukraine’s two most populous cities, Russia is taking losses from the air. Footage on social media shows Russian columns devastated by highly effective, Turkish-made Bayraktar TB-2 drones operated by Ukraine’s military. On the first morning of the attack, Russia disabled many Ukrainian airfields with a barrage of missiles. Since this was evidently insufficient to stop the Ukrainian air force from fighting back or launching air-to-ground attacks on the Russian army, Russia has, at best, achieved only air superiority over Ukraine: it can operate advantageously in Ukrainian skies, but it lacks the total dominance at which effective interference is no longer expected.

From the U.S. perspective, Russia’s decision to pursue a ground invasion when the skies remain contested seems foolhardy. The American military strongly favors establishing air supremacy before committing ground troops to battle. In the 1991 Gulf War, when the United States led a coalition force to liberate Kuwait from Iraqi dictator Saddam Hussein, an air campaign that lasted 42 consecutive days and nights preceded the first major ground assault. Over 100,000 sorties flew, using stealth bombers and laser-guided munitions to incapacitate the Iraqi military from above. When coalition forces invaded Iraq again in 2003, they did not first wait for an extensive air campaign—not because of a fundamental change in doctrine, but because the U.S. and its allies had continuously maintained air supremacy over Iraq for the previous 12 years. At the end of the Gulf War, the U.S. and allied militaries declared and enforced no-fly zones over most of Iraq, periodically striking Iraqi aircraft and air-defense systems, among other targets.

Since World War II, the United States has used airpower to great success. But airpower has another benefit beyond the strictly military advantage of being able both to see and strike any target in a theater of war: it is politically feasible. Air campaigns can inflict tremendous casualties on an enemy while sustaining few losses of their own. This prevents the bad public relations and loss of morale that afflicted the Iraq and Afghanistan wars in later years, while bypassing the onerous bureaucratic and logistical capacity needed to field an effective army. It’s unlikely that the U.S. ever would have launched conventional ground invasions of Yugoslavia in 1999 or Libya in 2011, but overwhelming airpower proved sufficient to achieve U.S. goals in both cases.

This extremely successful track record, however, has eclipsed the reality that orientation around airpower is not the only potent military strategy for a major power. Russia’s military is instead built around ground-based heavy artillery. Much of the Russian force now invading Ukraine consists of “Battalion Tactical Groups” (BTGs). These formations of less than 1,000 men operate as much artillery as a U.S. armored brigade—a formation of about 4,500 troops—as well as air-defense, anti-tank, and multiple-launch rocket system (MLRS) batteries. Russia’s Soviet-era artillery has been modernized and much of it is brand new. In addition to large quantities of self-propelled artillery, many of Russia’s active artillery systems substantially outgun and outrange their Western equivalents, partially thanks to a domestic defense industry that specializes in this niche. Unlike many European countries, Russia still employs cluster munitions that can saturate an area of 40,000 square meters with explosives. In Western doctrine, tanks are typically supported by artillery fire when seizing contested ground. Russian doctrine is the other way around: tanks are used to seize favorable positions for artillery, which then finishes off an enemy force. Surprisingly, the Russian military currently does not even operate any armed drones but uses a 2,000-strong fleet of reconnaissance drones to help locate artillery targets. 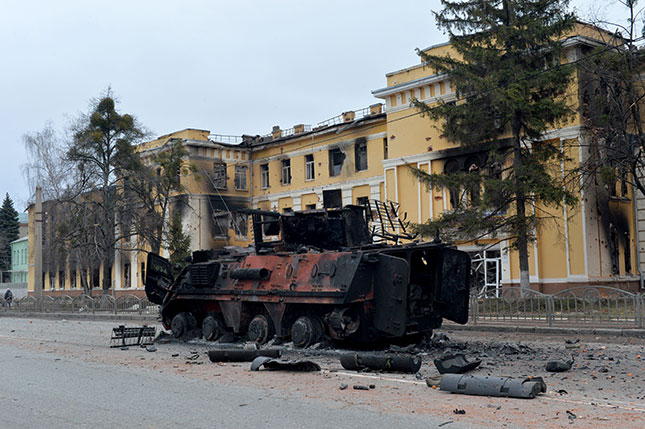 This artillery-centric army would be nevertheless highly vulnerable to air strikes in the absence of air defenses, a weakness of which Russian military theorists have been aware since the last years of the Soviet Union, and which modern Russia has taken pains to address. In the 1980s, Soviet marshal Nikolai Ogarkov proposed—among many other reforms—the creation of a unified aerospace service with combined responsibility for both airpower and air defense. The Soviet military proved too rigid for reform before the USSR’s collapse in 1991, but Putin’s Russia inaugurated the Russian Aerospace Forces in 2015. This followed a major period of military reform from 2007 to 2012 under Defense Minister Anatoly Serdyukov, a civilian and career tax official who relentlessly purged Russia’s bloated defense bureaucracy and worked to modernize equipment, tactics, and administration. Today, Russia operates some of the world’s densest and most sophisticated air-defense systems. The infamous S-400, which has been purchased by China, India, and Turkey, is one example, but progress has also been made in linking up older air defenses to modern target-acquisition systems. Every BTG also operates its own short-range air-defense systems.

The result is a Russian military designed to win land wars while avoiding a rout from the air. Russia launched its invasion of Ukraine without air supremacy simply because its army was designed to operate without it. Moreover, Putin’s authoritarian Russia is far more politically willing to absorb casualties than Western democracies.

The stiffness of Ukrainian resistance has perhaps surprised observers who expected a rapid defeat. Whether due to Russian incompetence, the value of Western-made weapons supplied to Ukraine, or simply the determination of Ukrainians fighting to defend their country, this has helped international support solidify around Ukraine. This impressive feat of consensus-building, however, risks the same mistakes that led internationally supported Armenia to a defeat at the hands of militarily superior Azerbaijan in 2020. Wars are fought at the speed of tanks, not tweets. Symbolic victories have their own value, but they cannot ultimately surmount a hard military defeat.

No matter how unjustified Russia’s actions in Ukraine are, the U.S. and NATO remain unlikely to commit the military force needed to push Russian forces out of the country. And while sanctions may destabilize the Russian financial system, Moscow has already bet on greater economic integration with Asia, especially China, over the U.S. and Europe. The Russian military remains far larger than Ukraine’s and, despite setbacks, continues to advance. In Moldova, Georgia, and Ukraine, Russia has proved its ability to consolidate territorial gains into political ones by spinning up otherwise-unrecognized statelets like Transnistria, Abkhazia, or, of course, the Donetsk and Luhansk People’s Republics. These client states can be used as staging grounds for Russian garrisons in the long term or even be annexed outright, like Crimea.

The potential remains for a Ukrainian show of force. But even if Russia fails in its goal of regime change in Kyiv, it will likely have carved up Ukraine’s borders—a feat that Putin will surely spin as another victory.

Samo Burja Healthy institutions are made, not born.
eye on the news