They Shall Not Grow Old, directed by Peter Jackson

To commemorate the centenary of the Armistice ending the First World War, New Zealand director Peter Jackson—of Lord of the Rings fame—has made They Shall Not Grow Old, a complex and powerful depiction of life along the British lines during World War I. After scouring more than 100 hours of original footage from the Imperial War Museum, Jackson has pieced together a vivid picture of trench warfare that will undoubtedly stand among the finest war documentaries. Jackson and his production team not only restored the century-old film, but also added color and sound, while adjusting the frame rate to bring every grim detail of the Western Front to life. Never have modern audiences been able to feel with such immediacy a war almost extinguished from living memory.

As Great War historians know, the events between 1914 and 1918 defy encapsulation. There is no easy narrative of the war beyond the experience of the individual soldier; the conflict gave rise to the “war memoir” genre, as autobiography seemed the only appropriate way to make sense of the devastation and disillusionment. (For the same reason, World War I was the first war to produce its own subgenre of poetry.) In his assemblage of historical footage, Jackson refuses to impose false historical logic on events. While the film has a chronological arc—we begin at the war’s outbreak and end with the soldiers returning home—all other traditional narrative markers have been stripped away. We see crowds of soldiers in the streets of London; men of all ages laughing, eating, smoking, and playing in the grass; the decaying bodies of men and horses littering the ground; German POWs carrying stretchers bearing the wounded; the dead being lowered into mass graves. 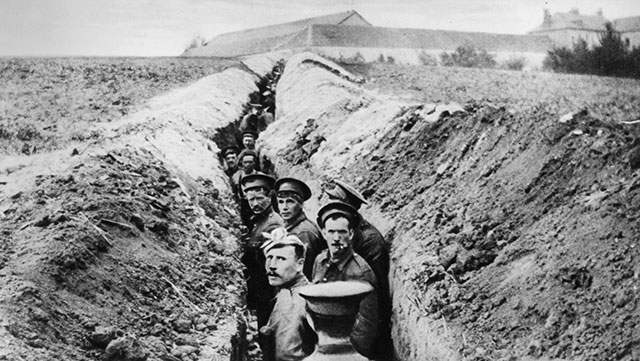 The documentary imagery of war is staggering. About 20 minutes in, when the film changes from black and white to color (coincident with our arrival at the front lines), the images become incomprehensible. “This cannot be real,” one thinks. “This must be a reenactment.” But the images are real, and the “handsome, ruddy, square-shouldered young men”—in the words of historian Charles Carrington—one sees marching through the muck are actual human beings. Their names may be forgotten, but their faces are as familiar as any one might see on the street today.

Jackson produces a kind of alienation effect not unlike that which the war had on soldiers. Nothing is what it seems, yet everything is exactly, horrifically what it is.

There is a lot to love in this film. From crowds of bright-faced British troops marching across parade grounds to the thunderous boom of the artillery guns, They Shall Not Grow Old shows a country at war as we’ve never seen it before. The innocence of the war’s beginning, and the simple-hearted nationalism of the men who enlisted, represent the chasm between our own cynical age and the summer of 1914. In this way, the film depicts the dark side of what deep love of country can lead to.

“You were proud of your country,” one soldier says. “Any enemy of England was an enemy of mine.”

“We’re as good a country as any in the world and you’ve got to be prepared to fight for it,” says another.

But the documentary offers a critique of nationalism even as it celebrates its virtues. Nationalism is one of the film’s many double-edged swords, and perhaps the most cutting. In a war of irony and contrast, nothing stands in more capricious opposition than the love that led men to their deaths. The film depicts a world where men were prepared to suffer and die for an idea, an abstraction, something called “England” or “Germany.” In this, perhaps, are two lessons for our time: any nationalism without a basic recognition of individuals is folly; and war will always be the ultimate victor, regardless of which side wins. 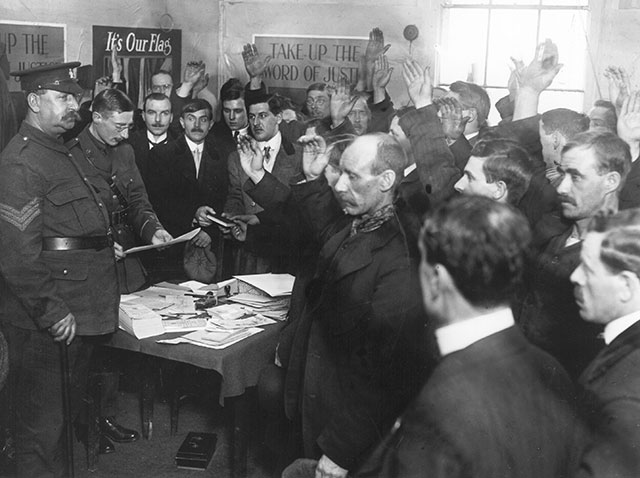 Jackson shows us a visual landscape at once familiar and alien, with century-old images made suddenly new. The boyish grins of the soldiers, the fields and furrows of the French countryside, the rashers of bacon cooking in the sunlight—these images are comforting and familiar. But the film soon wrenches back into scenes of war—mangled limbs, “the smell of death,” and lines of soldiers marching through the charred and muddy earth. The pathos of They Shall Not Grow Old lies between these two worlds: civilization and its negation.

This is an especially modern documentary in the way it unveils itself through fragmented images and sounds. The film disorients us even as it presents an unmediated view of life in the trenches. We’re not told, for instance, whether we are in France or Belgium. No dates are given, other than the beginning and end of the war, so we never know which battle we are witnessing. The soldiers are kept anonymous, and their myriad voices flit in and out of the documentary, narrating, telling stories, making jokes.

One might expect a sense of anonymity from a film full of nameless British faces, identical green-grey uniforms, and hills blasted beyond recognition. But Jackson achieves the opposite effect: the uniqueness of each soldier’s face impresses us. Their voices are distinctive, expressing their views of the war. “People didn’t seem to realize what war was,” says one survivor. “A man’s life wasn’t worth anything, at the end,” says another.

They Shall Not Grow Old is a two-sided memorial to civilization: an homage to what it was, and a warning about what it can become.

Finnegan Schick is a Teach for America corps member in New Bedford, Massachusetts. His writing has appeared in The New Criterion, The American Interest, Heterodox Academy, and the Pittsburgh Post-Gazette.

Cars and the Culture War

Mark Lennihan
eye on the news

Lance Morrow July 4 should be an occasion for Americans to put aside the punitive memory of grievance and embrace the reverent memory of gratitude.
Saved!
Close