Opioids and the Unattached Male

The United States now averages about 275 drug-related deaths per day, largely from synthetic opioids such as fentanyl. Many are aware by now that the spike in drug overdoses has hit white men without a college degree hardest (though black men are, unfortunately, gaining ground in this area). But one factor continues to be underdiscussed: it is disproportionately a crisis of single men.

While this trend has been noticeable over the past decade, the pandemic-afflicted year of 2020 seems to have thrown fuel on the fire. The latest CDC data shows that 35,419 single and divorced prime-age (25- to 54-year-old) men died of drug-related causes, a 35 percent increase from the year before. The never-married make up about one-third of the prime-age male population, but compose two-thirds of that demographic’s drug-related deaths. Similarly, the share of prime-age divorced men who succumbed to drug overdoses was nearly twice their share of the population at large. 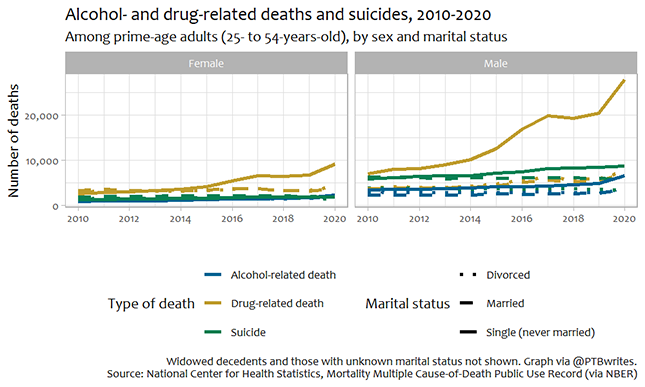 From 2010 to 2019, the drug-related death rate among never-married prime-age white men increased some 125 percent: from 52 deaths per 100,000 to 117 (including 2020 would show an even steeper rise, but the pandemic affected Census data collection). If single and divorced prime-age white men had seen opioid deaths rise by only the same rate as those deaths rose among their married counterparts, the U.S. would have seen 38,800 fewer deaths from drug-related causes over the past decade just among this demographic group. 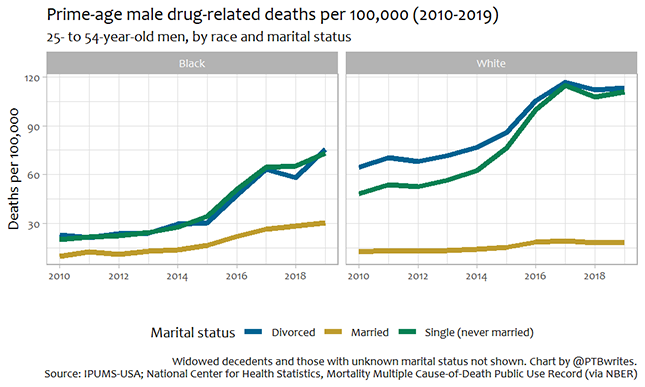 A marriage certificate is no prophylactic against the scourge of drug overdoses, of course. Marital status is correlated with income, race, and age; while death certificates don’t report income, we know that married decedents are more likely to be white, older, and better-educated. Controlling for those factors still shows single men to be at greater risk of dying from drug-related causes than married ones. 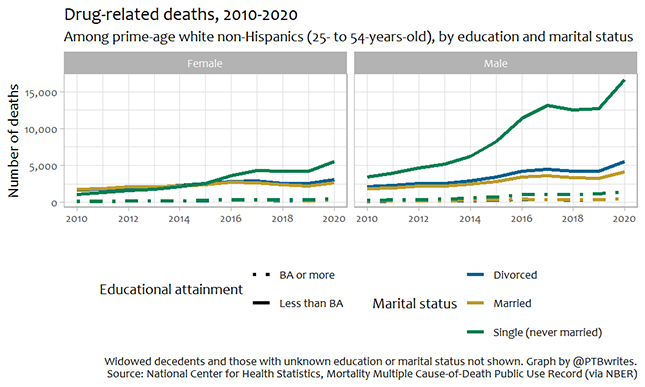 Any discussion of opioid deaths, then, should focus on the unique perils of the unattached male. Some scholars have indeed pointed out the trend. University of Maryland sociologist Phillip Cohen has previously noted that from 2007 to 2017, overall mortality rose among unmarried whites, driven by the increase in drug and alcohol deaths. (For blacks and Hispanics, slower to be hit by the rise in synthetic opioid use, mortality largely remained flat.) The Joint Economic Committee’s Social Capital Project, where I worked for two years, also highlighted the disproportionate effects on the never-married and divorced in its analysis of 2015 death records.

But analysts are often reluctant to discuss the problem in these terms. For one, precisely identifying the instrumental value of marriage can be tricky. No randomized controlled trials capture marriage’s benefits, and selection problems exist—people who can attract a spouse are probably qualitatively different than people who can’t. The traits and characteristics of someone who marries—being dependable and oriented for the future—are probably associated with more education and resistance to illicit drug use. An opioid user who is already single is also more likely to stay single.

But while we may not be able to precisely measure marriage’s causal impact on any given individual, there is no shortage of research that suggest marriage can play a very real role in helping ourselves, our children, and our communities. And while many factors go into the choice to marry, these decisions don’t happen in a vacuum. Strong evidence exists that the status quo in public policy can prejudice an individual’s decision-making for or against marriage, at least on the margin.

A 2019 HHS report found that marriage penalties in tax and transfer programs had the biggest impact on “working class families with incomes between 100 and 250% of the [Federal poverty line].” Some working-class and middle-class parents tell focus groups that they would like to marry but choose not to—for fear of losing the in-kind benefits they receive. Our public policies too often prod people toward less stable forms of union through benefit cliffs and implicit marginal tax rates.

As policymakers consider how incentives render young men more vulnerable to opioids, they should not limit themselves to public-health interventions and law enforcement action to stop the flow of illicit drugs. They should also remove state barriers that nudge young adults away from marriage; reform our education system to help young men become productive, marriageable contributors to society; and work on shaping an economy in which more men can be productive without having a college degree.

If marriage by itself does not guarantee better outcomes, it has the potential to transform people’s lives as an institution aimed at permanence, selflessness, and stability. Any agenda to combat the scourge of drug overdoses must include moving beyond agnosticism toward marriage’s potential benefits and undoing the barriers that make it harder for many adults to get married—and to live longer and healthier lives.

Patrick T. Brown (@PTBwrites) is a fellow at the Ethics and Public Policy Center.

Patrick T. Brown With the Left’s hostile response to Florida’s initiative to support responsible fathers, conservatives can occupy the high ground on this crucial issue.
eye on the news

Wards of the State

Patrick T. Brown The Build Back Better child-care plan would relegate religious providers to the margins.
eye on the news

Diana Furchtgott-Roth If President Biden wants to tackle higher prices, he should forget about more tax hikes and instead reverse his policies on domestic oil and natural gas production.
eye on the news