My father never liked August. It’s a cruel month for nostalgists. He harbored an Irish sense of melancholy—a tendency to romanticize sadness—and believed that the screeching cicadas, shorter days, and tired leaves marked the passage of time. Autumn’s arrival meant less time with his three sons: Charles, Robert, and Shane.

This penultimate day of the month, I found myself wandering downtown Harrisburg, my birthplace. At my childhood home in nearby Hershey, my mother sat bedside by my father, who, in poetic Irish fashion, was marking the final hours of his least favorite month in hospice care. “Par for the course,” I imagined him saying.

I’m a habitual walker who accumulates excessive miles and arresting daydreams. But in recent years, I’ve not strolled through the capital city, overlooked for its architectural grandeur and urbanity. That humid Tuesday, I passed the landmarks of my earliest memories.

On Forster stood the brownstone where my father’s late friend Jimmy Moran once lived as a struggling artist. As a child, I wanted to be an artist, and my father embraced this early passion. I drew pictures of Harrisburg buildings, usually the Capitol, and my father shared these uneven renderings with Moran, who endorsed the effort.

Now I passed those riverside structures, and then stopped at Front and Walnut before a Second Empire mansion where my father, an attorney, had worked in the 1990s. Just as then, the crosswalk cuckooed; the sound transported me into that building’s conference room. On Saturdays, I’d draw on yellow printer paper and eat Spot hot dogs while my father dictated letters. He’d praise the drawings, though offering honest critiques.

He encouraged me to perfect the craft. I took drawing lessons one block over, at the local art association. Often, I’d sketch the Walnut Street Bridge, a truss span that we crossed on many occasions. I suffered from sore, flat feet and fears of the Susquehanna River below, so he’d carry me to City Island, where we attended baseball games or played in the village park. 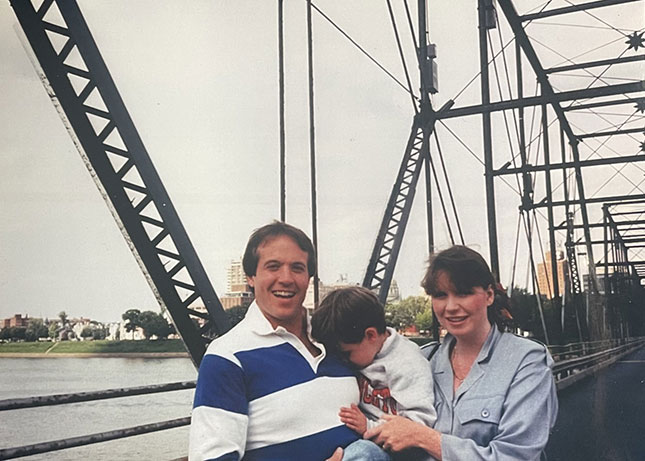 I walked briskly now across the bridge, looking down at the water. In the distance stood Harrisburg Hospital, where my father met his first son. Each birthday, he’d recount how he celebrated my arrival with beer at a nearby hotel bar, where he sang the second track from The Who’s Tommy: “It’s a boy, Mrs. Walker, it’s a boy.” That night, his wife and baby resting at the hospital, he watched Platoon at home in the city’s Taylor Park neighborhood. In our last phone conversation, he was in good spirits. “I’m thinking about watching Platoon,” he said.

As a student at Bishop McDevitt, atop the city’s Allison Hill, I stopped sketching and began crafting sentences. My father thought I should become a writer. I followed his recommended reading list. He gave Moran my career update.

He edited my short stories and high school political columns. “I’m your Maxwell Perkins.” He marked my drafts with patience, wit, and sarcasm. Any criticism was merited, for he was an eloquent talker and a talented scribe. After reading some of his undergraduate work at the University of Scranton, a Jesuit priest opined: “This youth is a gifted, very Irish writer.” He became so much more.

Fatherhood was his vocation. He championed our passions, defended our beliefs, and encouraged our careers. In my case, from high school onward, he distributed my writings to colleagues and friends.

Six autumns ago, my first major published piece was dedicated to Moran, who had recently died. My father’s nurturing of my early interests ultimately led to a writing and editing career. And here I was now in Harrisburg, facing the prospect of losing my editor and greatest advocate. That evening, I read his favorite novella, Tracy’s Tiger, by William Saroyan, with its ending that serves as a metaphor for love. I then said good night to my father and “I love you.” I blessed myself and exited the room.

He died early that last morning of August, an autumnal breeze extinguishing the summer heat. “Our home has a newfound quiet,” my youngest brother eulogized. But in Harrisburg, on that last day, I found him everywhere.

Photos: Courtesy of the Author

Charles F. McElwee The Keystone State’s unresolved primary was a test of populism vs. moderation.
More on