The IRS extended the filing deadline for income tax returns this year, but in New York, another tax season is currently in high gear: local tax-grievance time. Between now and mid-June, New York State homeowners will file for reductions in their property assessments, deluging local assessment-review boards in Nassau, Suffolk, and Westchester Counties with appeals—many promoted by a tax-grievance industry unknown in most of the country. The thousands of assessment challenges are part of a statewide property-tax assessment mess that is at its worst in New York City’s suburban counties.

Real estate taxation, the main source of revenue for local governments across the United States, rests on the technical and arcane—yet crucial—process of property reassessment. When property assessments are out of date or inaccurate, so are property owners’ tax bills, with repercussions for both personal finance and municipal revenues. A recent University of Chicago study of property-tax-valuation practices across the country chose to emphasize the impact of unchanged assessments on minority homeowners, who are more likely to live in lower-priced homes. In fact, out-of-date assessments skew property taxes for all homeowners. As the Tax Foundation points out, “the combination of infrequent reassessment with rate increases shifts the property tax burden away from those whose property has been appreciating onto those whose property values have been declining.”

All but nine states have laws requiring regular property reassessments, but the exceptions include one of the largest and most heavily taxed states: New York. Here, not only is reassessment not required but also, in some places, values haven’t been reset for decades or generations. Compounding the state’s failure to enforce a uniform full-value standard, disparities arise from New York’s multiple layers of local governments.

Outside Nassau County and New York City, property assessments are determined by hundreds of individual cities and towns. To accommodate county governments, which cover multiple municipalities, and school districts, which can cover pieces of several towns, the state calculates an “equalization rate” reflecting the total assessed value of properties in each municipality divided by the same jurisdiction’s total market values based on sales. A rate of 25, for example, means the municipality assesses property at an average 25 percent of market value.

The purpose of the equalization rate is to ensure that properties with similar full-market values in different municipalities pay equivalent shares of county and school taxes. In effect, however, the formula has tied individual tax bills to the sale prices of other homes in one’s community—in order to ensure that a municipality’s share of its contribution to its county tax revenue remain “equal” over time.

New York’s is a non-system that has led to distortions and tax injustice and spawned a cottage industry of consultants who use the courts to force assessment adjustments for individual homeowners, while pocketing a large portion of the savings for themselves.

A sad legislative history put the Empire State in this fix. In the landmark 1975 case Hellerstein v. Islip Assessor, New York’s highest court ruled that localities needed to abide by a long-ignored state law requiring property assessment at full value. But the Hellerstein decision was effectively nullified by a 1981 state law that created separate property-tax systems for New York City and Nassau County, where property is divided into four different classes taxed at four different fractions of market value.

As a result, New York localities often go decades, indeed generations, without reassessments. New York City, where assessments are regularly adjusted, has a better system: those living in expensive neighborhoods will, over time, see appropriately higher bills than homeowners in lower-value neighborhoods. But New Yorkers who might wish to flee for inner-ring suburbs in Westchester, Nassau, Suffolk, and Rockland Counties will confront property tax chaos.

In an exemplary Westchester locality (where one of us sits on the local Board of Assessment Review), assessment rolls were last updated during Richard Nixon’s first term in the White House. Thus, homes that were highly valued a half-century ago but are now outdated remain stuck with stratospheric tax bills. In counties where median property-tax bills are among the highest in the country—typically exceeding $10,000, with $100,000-plus bills not impossible—the consequent inequities can be enormous. A ranch house that was expensive and in style in 1965 can still be taxed as if it’s in high demand, though preferences have changed.

The lack of consistently updated assessments means that most suburban tax rates, and thus individual tax bills, get determined by that arcane “equalization” process. The state compares a sample of home sales in all of a county’s cities and towns to determine what share of county and school district property taxes each should pay. If homes in your town sold for increased prices compared with neighboring communities, your county and school rate increases—even if the market value of your own property decreased.

No wonder that local boards of assessment are hit with a tsunami of grievances, many filed by older homeowners living on fixed incomes in homes whose value has declined, yet who now must pay higher taxes. Annual tax “grievance days” occur in Suffolk County on May 18 and Westchester County on June 15. In the absence of regular reassessments, a shadowy and parasitic group of grievance-filing firms has flourished. Often billing themselves as “real estate consultants,” these firms are the property-tax equivalent of ambulance-chasers—charging fees up to half a homeowner’s first-year tax savings for filing challenges with local tax-appeals boards.

Grievance firms build business by stuffing suburban mailboxes with promotional flyers that promise results. Incredibly, the overwhelming majority of assessment challenges filed by and on behalf of homeowners are successful—not at the local level but in an obscure judicial venue called the Small Claims Appeal Review. Data from the state’s Department of Taxation and Finance show how extensive and lucrative this obscure “industry” is: 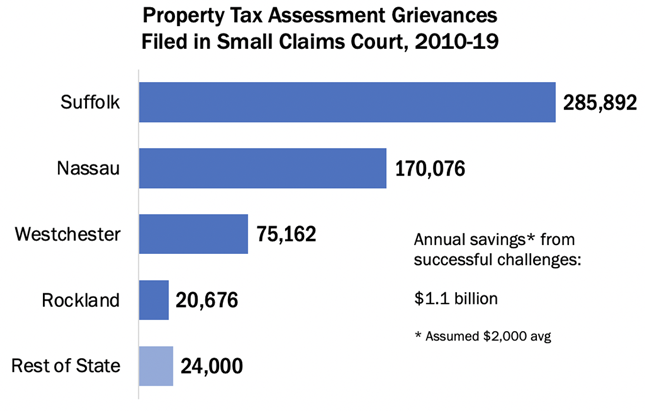 The numbers for the past decade are staggering: nearly 500,000 assessments were appealed to the courts in four downstate suburban counties, with Long Island being by far the most active source of grievance. By comparison, the total grievance count was far smaller in the rest of the state, where local residential assessments generally are more up-to-date and more likely to reflect current value. In New York City—where taxes on one- to three-family homes are much lighter, market values are more accurately estimated, and assessed-value increases are capped—very few residential assessment challenges go to court.

The state does not report how many assessment-grievance cases lead to tax reductions, but assessors at the local level do. In 2019, in Westchester County’s Rye, 78 percent of small claims property-tax appeals were successful, leading to tax reductions of $522,000—an average savings of more than $3,000 per property. Assuming very conservatively that property-tax grievances throughout the metropolitan New York suburbs saved homeowners an average of $2,000, the ten-year total savings came to $1.1 billion. And assuming that most of those cases were filed by grievance firms, the industry’s total take was in the neighborhood of $500 million—most of it, again, on Long Island. When one homeowner’s tax bill goes down, the bills of others go up to ensure that the full tax levy is raised. That keeps the grievance gravy train rolling.

When jurisdictions try to break the cycle, furor can ensue, as happens in Nassau County, the lone New York suburb with countywide assessment. A few years ago, Nassau restarted its first full reevaluation of property since 2003. Republican officials looking to score points against county executive Laura Curran, a Democrat, actually encouraged homeowners to file grievances. Curran responded with a mailer advising property owners of their right to challenge assessments. Looking ahead to a reelection campaign, she has now frozen assessments for a year to avoid having assessments reflect sharp increases in home-sale prices driven by the pandemic.

The common practice of assessing properties at a tiny fraction of their full value also fuels the grievance cycle. For example, a Nassau County home worth $500,000 might have a total assessment of $500, subject to municipal and school-district tax rates calculated on a “per $100 of value” basis. This makes a murky system even less transparent.

Howard Husock is an adjunct scholar at the American Enterprise Institute and a contributing editor of City Journal. E. J. McMahon is the founder of and a senior fellow at the Empire Center for Public Policy. Both have served on local boards of assessment reviews.

Seth Barron Amid a stark decline in quality of life and public safety, Kathy Hochul prevails in the governor’s race.
eye on the news

Ray Domanico New York State boasts about its nation-leading education spending, but its results show little for the effort.
from the magazine