Under normal circumstances, New York City’s sidewalks bustle with energy: with workers commuting to the office, students heading to class, and tourists checking out the Big Apple. They also contain something found in no other great city in the world—piles of garbage, dumped in bags on the sidewalk. This unsightly, foul-smelling practice has earned New York City the dubious label #TrashCity, and it’s a sign of the city’s complacency that New Yorkers tolerate these piles. Any plan to reopen the city, post-Covid-19, should not settle for a return to the status quo. We should use this disruption as an opportunity to make Gotham greater—and that includes getting garbage off the streets.

New York City’s trash woes are linked to its urban design. Other American cities were designed with alleyways, allowing trash to be stored in dumpsters, out of sight. New York’s grid layout doesn’t leave room for these side streets, so trash instead gets bagged and dumped on the sidewalk. The Department of Sanitation handles trash pickups for residential buildings, government offices, and some nonprofits at least twice a week. Trash intended for the Department of Sanitation is supposed to be placed in front of curbs after 4 PM, but many building managers throw it outside at irregular intervals, leading to garbage pileups. A separate, private system of trash collection serves commercial establishments.

This patchwork system imposes significant costs on New Yorkers. First, the presence of trash on sidewalks is an unsanitary and noxious-smelling harm to the quality of life. Longtime New Yorkers may have learned to live with this unpleasantness, but it likely contributes to many families’ decision to flee to the suburbs, and it makes a bad impression on tourists, too.

And the costs of sidewalk trash are not just aesthetic. They’re a major factor behind New York’s massive rat population, which acts as a vector for many diseases. “It’s an all-night buffet for the rats,” says Jason Munshi-South, a biology professor at Fordham. A visible sign of the problem: the grease trails that spread from many common trash-dumping sites, left from frequent rat visits. The city has spent tens of millions of dollars trying to defeat the rat infestations, and it has even considered making the feeding of squirrels in parks punishable with fines or jail time, since the food left behind attracts vermin. Yet these efforts are fruitless without directly addressing the primary source of food that sustains the New York City rat population.

The current situation also ill-serves the city’s garbage workers, who must navigate through traffic and parked cars in order to access bags left on sidewalks, lifting as many as six tons of bags a day. Their rates of line-of-duty injuries are higher even than those of police officers. Though unionized Department of Sanitation workers enjoy generous benefits, the nonunionized workers doing private, commercial trash collection get much lower pay and face similarly hazardous working conditions. In their rush to complete pickups, private trucks killed seven people in 2017 alone. Mayor Bill de Blasio’s ambitious Vision Zero plan to eliminate pedestrian deaths has so far done little to address either the hazardous conditions for garbage workers or the dangers that these workers themselves can impose on city residents.

While the immediate cause of New York’s trash woes is a lack of alleyways, the ultimate reason is the lack of foresight and leadership by local government. Other cities around the world lack alleyways, too, but they have figured out how to collect trash in ways that keep sidewalks free of it. These alternate solutions range from more sophisticated hydraulic trash pickups to underground bins that store garbage for pickup to dumpsters that occupy sidewalk or street space and collect trash in a more sanitary way.

To its credit, the Department of Sanitation issued a request for proposals in 2019 on how to improve the trash system. It followed up with a “Clean Curb” initiative in early 2020 that makes two key innovations. First, the city now requires all new apartment buildings with more than 300 units to produce plans to keep garbage off sidewalks and place it in designated containers. Second, the city intends to launch pilot trash initiatives in certain Business Improvement Districts. Local leaders in these commercial areas can apply to get special containers for trash ordinarily placed in the streets.

These are steps in the right direction, but they don’t go far enough, and they retrench the city’s insistence on addressing trash pickup in a piecemeal fashion. While New York has allowed new developments, such as Hudson Yards and Battery Park, to implement modern methods—for example, pneumatic trash pickups—these localized interventions aren’t enough to make a real difference in the city’s overall trash problem.

A more effective—and comprehensive—approach to the city’s garbage woes was outlined in another submission to the Department of Sanitation’s request for proposals. Proposed by the Chelsea–Hell’s Kitchen Coalition for Pedestrian Safety (CHEKPEDS), this plan would follow the example of many other cities and place on-street containers in every neighborhood in the city, eliminating the need for sidewalk trash entirely. 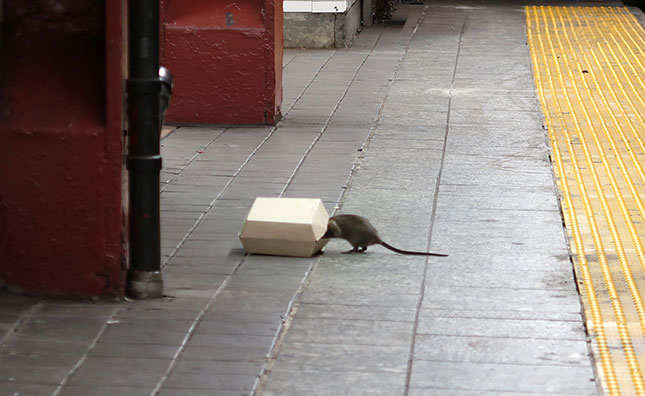 The proposal is fairly simple. Six parking spots per block, three on each side of the street, would be reserved for Waste Corrals, which could hold more than 500 bags of recycling and trash; the containers would be located no more than 100 feet from buildings. The cost of the system, CHEKPEDS estimates, would be just $889 for installation, along with periodic cleaning expenditures. The group’s plan would, in a stroke, deal with the bulk of New York City’s trash problems. On-street containers would free up sidewalk space and eliminate odors and unsightly garbage bags. Rodents would be denied easy food access. The hygiene and basic livability of the city would be greatly improved.

Garbage workers would also see benefits. Rather than parking their trucks on the street and hauling bags through parked cars and sidewalk space, the trucks could be parked adjacent to the on-street containers, making pickup easier. With fewer stops and a more direct path to the trash, workers would see faster and less burdensome routes. Moving trash onto streets could accelerate other reforms to the sanitation system—in the long run, allowing for mechanized trucks to pick up the trash.

New York City should also move to market-based pricing for garbage. Most other major American cities charge for trash pickup on the basis of garbage generated (“pay-as-you-throw,” as it’s called), but New York funds its system through general revenue. Unsurprisingly, studies have shown that cities that charge for the actual cost of garbage services produce less trash. As New York faces urgent budgetary pressures in the wake of the pandemic, it must get creative in finding ways to deliver more for less. Moving trash into containers would make it easier to monitor the amount of trash generated from specific establishments, so market-based pricing would be fairer.

The city should also take the opportunity to address the wildcat system of private trash pickups. Currently, commercial establishments can contract with any private trash provider. The result is a patchwork of competing and inefficient routes—some with as many as 1,000 stops each night. This pickup schedule also exposes New Yorkers to the noise and congestion of multiple competing trash pickups. As City Journal’s Nicole Gelinas has observed, the Department of Sanitation has already proposed a good alternative: zone the city into 20 regions and allow local businesses to pick from three to five carriers in each zone, in a system of competitive bidding. Guidelines could be put into place to ensure that city council members don’t corrupt the process or use the wrong criteria (unionization or social justice, for example) to grant contracts. If done well, such a bidding system, which should include necessary background checks of carters, can benefit the city—and limit the byzantine and inefficient system of pickups.

Taken together, these reforms would be inexpensive to implement—indeed, they could even raise substantial revenue for the cash-strapped city if combined with reasonable charges for trash produced. The only real cost is parking: six spots per city street, in exchange for cleaner streets. To sweeten the deal, New York could consider tying the proposal to residential parking permits, as is common in other northeastern cities and has already been proposed in the context of the city’s congestion-pricing plan.

None of these reforms to the trash system is novel. They represent best practices of trash collection used around the world. Still, rising to this challenge will require a substantial change in how New York City does business. For too long, the city has accepted the trash status quo; that so many tourists and workers have been drawn to the city (at least until recently) has made it easier to avoid change.

Such complacency is no longer sustainable post-Covid-19. Cities now face serious challenges in maintaining and attracting workers, who are increasingly looking at suburban living and remote-work options. If New York wants to remain great, it must improve urban livability. Getting garbage off the sidewalks is a good place to start.

Arpit Gupta is an adjunct fellow at the Manhattan Institute and assistant professor of finance at New York University’s Stern School of Business.

Top Photo: Piles of trash on city sidewalks create an unsanitary environment that likely contributes to many families’ decision to flee to the suburbs. (ALEXI ROSENFELD/GETTY IMAGES)

Making Sense of the Housing Market

Arpit Gupta With remote work the new normal, cities must adapt to remain competitive.
eye on the news

Arpit Gupta A complicated phenomenon that owes to many causes, homelessness can nevertheless be worsened by bad housing policy.
More on

Jason M. Barr Four centuries of crises in New York
from the magazine