One hidden luxury of living in New York is the ability to travel internationally, in a sense, while staying at home. Among the places that offer the dizzying feeling of entering another world is Jackson Heights, Queens—perhaps the most ethnically diverse neighborhood in the world’s most ethnically diverse municipality. Walking along Roosevelt Avenue feels like a trip to several countries at once: here an Ecuadoran street-food vendor, there a Tibetan dumpling house, in that basement a Nepali hangout spot, and then a Mexican aguachile restaurant a few blocks from Malaysian stores. But like many international trips, the walk is an assault on the senses—in this case, involving everything from the 7 train’s elevated tracks and the industrial screech of metal on metal to the reek of trash and solicitations from hookers.

Though Jackson Heights is vibrant, it has less green space than nearly anywhere else in the city. Its 170,000 residents speak more than 160 languages, yet enjoy in their neighborhood just a few small parks. But since the pandemic, that has been changing. In the spring of 2020, advocates of “open streets” across the five boroughs pushed city leaders to allow the pedestrianization of long stretches of road. Though many corridors have since disappeared, Jackson Heights’s 34th Avenue remains. These few dozen blocks along a tree-lined, largely residential, avenue in the heart of the neighborhood are closed to cars 13 hours a day, seven days a week, and may soon become a permanent “linear park.” The transformation of 34th Avenue is transforming the neighborhood, in turn.

“We needed space,” says Jim Burke, president of the 34th Avenue Open Streets Coalition, an advocacy group that helps plan events on the thoroughfare. “Everyone was going insane, and there was no place to go. So we kept demanding an open street, and we got one.” Here, as in many other places, the early days of the pandemic catalyzed changes that had long simmered. A pilot open-streets program in the neighborhood had failed to gather much interest, Burke notes. But once the city shut down, there was little else to do but go outside. 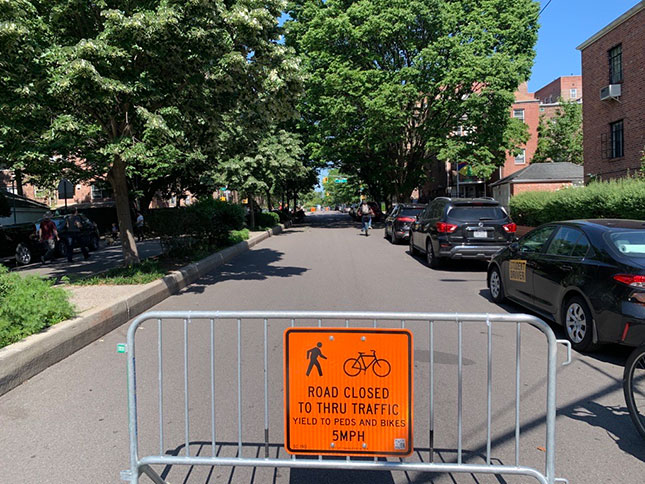 For much of the pandemic, the street offered residents a much-needed outlet. Burke recounts neighbor after neighbor offering new ideas for activities. With gyms closed, salsa and Pilates classes moved outside. With schools remote, ESL tutoring and arts-and-crafts programs took to the streets. The city mostly let people participate in these voluntary programs without licenses at the beginning, observes Burke, but eventually, it began to require permits (his coalition helps would-be vendors fill out the forms). Such regulations, says urbanist academic Mike Lydon, can “diminish the impact and potential of programs at the city level,” removing the amenities that attracted people to cities in the first place.

But the new 34th Avenue persists. The 1.3-mile strip is a welcome respite from overwhelming surroundings, offering bikers and runners a place to exercise, families a birthday-party venue, and students at the seven schools along the route a giant playground. A Transportation Department survey of 2,212 residents conducted last summer found that 77 percent of respondents favored permanent changes to make 34th Avenue a “pedestrian or cycling priority corridor.” City data show that most Jackson Heights residents take public transportation to work. Officials have backed the initiative, with Queens borough president Donovan Richards calling to make the open street permanent. In April, the city’s Department of Transportation revealed its plans to do so, christening the would-be corridor “Paseo Park.” To reconfigure the avenue as a permanent “shared street,” with cars occasionally permitted but mostly discouraged, the city would install a few fully pedestrianized plazas and erect obstacles on the few stretches remaining for cars. “When you see the full plaza blocks, and 78th Street as a cul-de-sac, you see what a huge victory this is for us,” Luz Maria Mercado, a supporter of the linear park plan, told Streetsblog, an advocacy website.

Still, support is far from universal. Opponents have been vocal on community message boards. Drivers grumble about parking space and say that the street has increased congestion on Northern Boulevard, which parallels the avenue. Making their case on “equity” grounds, advocates of the park plan have sometimes adopted a politically divisive and counterproductive message, implying that opponents of urbanist mobility initiatives are morally backward.

Some residents have fought back. A countervailing force to the pro-open-streets coalition, called the Jackson Heights Coops Alliance, incorporated as a nonprofit in late 2021. Its president, Richard Pacheco, has set up a petition against the Paseo Park proposal. “This is not a park. We didn’t move to a park,” he recently told the New York Daily News. Meantime, on GoFundMe, a resident soliciting donations to hire a lawyer to “stop the Department of Transportation from taking over our neighborhood” has garnered nearly $6,000. 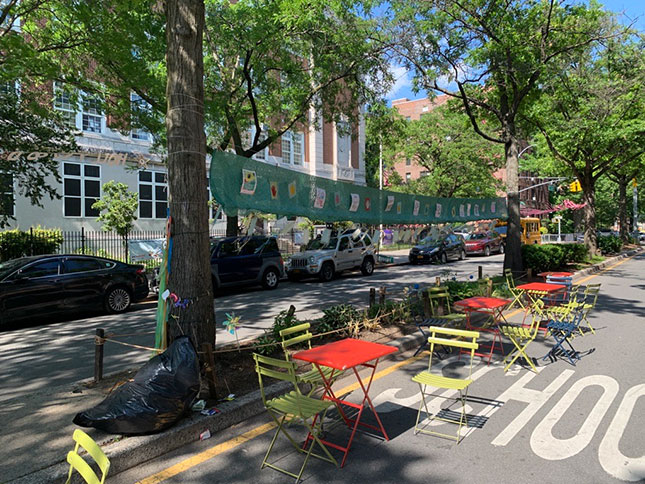 The two camps may be unable to compromise. Open-street advocates point out that cars are dangerous and keep people away. In an analysis of two open streets in Brooklyn, Lydon, coauthor of Tactical Urbanism and a supporter of such initiatives, found that pedestrian activity declines after the share of traffic on a street crosses a certain threshold. The solution is to install barricades: large planters, granite blocks, and bollards deter cars from entering 34th Avenue. Yet that only reinforces opponents’ objections, as in a controversial September incident in which a fire truck got stuck trying to turn from 34th Avenue onto a side street, perhaps showing the need for retractable bollards. In a heated statement to the Queens Post, Republican councilmember Vickie Paladino attacked a “tiny clique of deranged affluent urbanists who inexplicably seem to wield dictatorial control over city planning.”

It would be a shame if the political struggle impedes the improvement of this neighborhood. With city finances precarious, crime up from pre-pandemic levels, and the streets and subways uninviting, New York needs to offer its residents an alternative quality-of-life proposition. The city’s turn toward pedestrianization over the last 20 years has generally meant fewer traffic deaths. (See “Crash Curse,” Summer 2022.) The creative repurposing of safe public spaces at low cost to city coffers therefore seems tailor-made for today’s circumstances. Those who forge a life in the urban jungle need some havens. Given a choice to hear children playing or cars revving along 34th Avenue, which sounds better?

Photos courtesy of the author

Does Information Still Want to Be Free?

Theodore Kupfer Early thinkers in the movement anticipated many of the concerns of today’s dissident Right.
audio

Seth Barron New York’s city council wants to bar the use of criminal background checks by landlords.
eye on the news