Modern Art of the Deal

The latest iteration of New York’s 90-year-old Museum of Modern Art opened last week to mixed reviews that ranged from “slightly soulless” to complaints about lost “grandeur” to “terrific.” The critics make the mistake, though, of talking in terms of architecture and art. The new MoMA is a monument to the one commodity more priceless than a bunch of Monets: superfluous space in a global city.

The new MoMA’s still not much to look at from the outside. It’s changed from a squarish, nondescript warehouse-looking space to a more rectangular, nondescript warehouse-looking space. But how did MoMA, a nonprofit, get enough space, right in the middle of Manhattan—53rd Street, between Fifth and Sixth Avenues—to add 47,000 square feet, the equivalent of about 70 one-bedroom Manhattan apartments, and increase its capacity by one-third?

Simple: it grabbed the space out of the sky. MoMA’s addition sits at the bottom five-and-a-half floors of a new supertall, super-luxury “residential” tower for wealthy global denizens who want to stash their money in America. It’s a jagged, neo-Brutalist hulk with a lobby that seems to be inspired by a Courtyard Marriott. Whatever you think of empty supertall towers, though, you can’t resist a grudging respect for MoMA, in the same way you might have a grudging respect for how eighties-era Donald Trump outwitted preservationists and demolished the historic Bonwit Teller department store on Fifth Avenue to build his rose-and-gold Trump Tower. Like it or not, this is how it’s done. 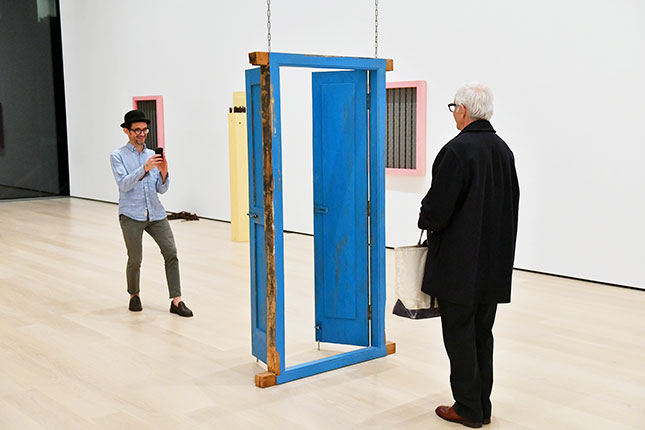 MoMA is good at real estate. In 2011, it bought out the new building of its bankrupt neighbor, the American Folk Art museum, for just $31 million, and proceeded to demolish what many considered an important work of architecture—only 12 years old—to make way for its new annex. Like Trump, MoMA is adept at special pleading. The city council granted the developer who bought its adjacent property for $125 million an exemption to the zoning code, meant to preserve light and air for nearby residents and visitors. The developer then could build to 1,050 feet, rivalling the old World Trade Center. That “variance” meant that MoMA could keep more space above ground level.

To see how MoMA’s real-estate deal could have happened under less sophisticated management, just walk across the street to the New York Public Library’s three-year-old 53rd Street branch, also a product of real-estate speculation. In 2008, the library sold its former property—the site of the old Donnell Branch—to (after a few post-recession twists and turns) the developer of the Baccarat Hotel. The library site was unusable until 2016, failing a generation of neighborhood children. The final product has crammed the library into three basement floors of the hotel, where it’s wrapped around a support beam, with exposed utilities showing through cheaply finished low ceilings, and little natural light.

The new MoMA, by contrast, save for a spacious basement bookstore, is fully and proudly aboveground, and came in on time and on budget ($450 million). MoMA’s logistical acumen is impressive: it integrated its new museum into its old one after just a four-month closure, from June to October. If MoMA were the state-run Metropolitan Transportation Authority, we’d still be hearing excuses about how this project would take ten years of closure and cost $20 billion.

Some critics have focused on how the museum has used its new space to showcase the work of women and minorities. The new MoMA, for example, gives ample room to Jacob Lawrence’s Migration Series, depicting the African-American exodus from the South, previously crammed into a hallway. But MoMA has no idea what to do with much of its new space and has filled it with some mediocre creations. One large room displays what looks like representations of the “poop” emoticon. Another spacious room lets people walk around plastic-looking mobiles that make music. A third invites visitors to wander among thin wooden sculptures of random appendages; a fourth displays a wall-sized simulation of an eighties-era computer desktop.

MoMA knows that these aren’t marquee masterpieces. Part of the goal here is crowd control. MoMA has some extraordinary classics, from part of Monet’s Water Lilies to Picasso’s Les Demoiselles d’Avignon to Matisse’s Swimming Pool to—most coveted by the picture-taking global tourists—van Gogh’s The Starry Night.

These pictures are huge attractions, but the museum, in its expansion, wants to divert tourists who came to New York to see their favorite iconic Modernist paintings by enticing them, instead, to go to different floors to see, say, a tower of acrylic yarn. 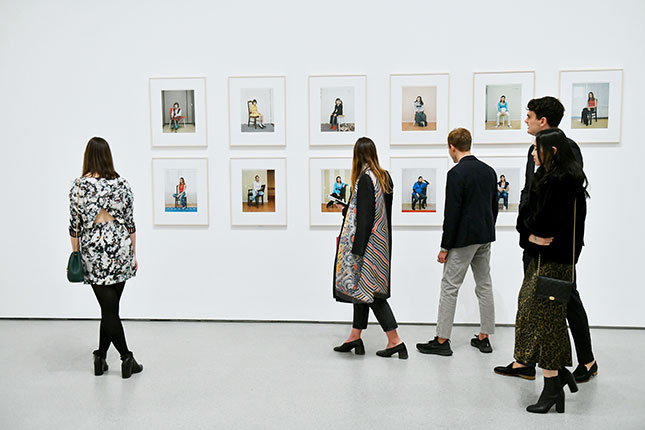 MoMA’s crowd-management curators are no match, though, for the European and Chinese visitors who have paid $25 to see the glories of Impressionism. Notwithstanding the allure of the yarn, the poop, or giant 40-ton steel blocks, they manage to find their way to Matisse, Monet, Picasso, and van Gogh, and create selfie lines several people deep. Meantime, anyone who wants to walk among the wooden sticks or plastic butterflies has much of the floor to himself.

Still, it’s hard to be too negative about any of this. The new MoMA is ineffably fun, and a big part of its success is the energy created by its visitors. MoMA often feels like a big airport lounge that has splurged on some nice decorations: where did all these people come from? Why are they here? Where are they going? If you’re a New Yorker, you can enjoy their presence without having to worry about getting on a plane. The guards seem to absorb the attitude: one asked me if I was enjoying myself (and not in a creepy way).

A big part of the fun is all that room. It’s something like when you get randomly upgraded to a hotel suite on your business trip and have no idea what to do with your extra parlor other than to kick your sneakers across the floor, and then carelessly leave them there overnight, un-put-away—just because you can.

Nicole Gelinas The city faces a daunting recovery from Covid-19, but it can do much to ensure that its many distinctive industries survive.
More on