At the southwest edge of the Lower 48, on a sunny, breezy beach where America meets the sea, a green and white van sits on a sandy road, facing south. Behind the wheel is a Border Patrol agent with his eyes on Mexico. The frontier fence stands 100 feet away. On the Mexican side, dozens of people are quietly taking selfies or peeking between the steel ribs of the 20-foot tall barrier. On the American side, three people from New York City look back. Two are visitors from Manhattan. The third is the agent himself—he hails from Brooklyn.

“I thought there would be more people on this side of the fence,” I said, noting that the nearby International Friendship Park was empty.

“More are coming,” the agent replied. “They’re on the way now.” I wanted to ask how he knew, but instead I squinted north, following the wide beach as it curved westward toward Coronado Island and San Diego Bay, clearly visible in the distance. There was no one in sight, and no border security, either—at least, none that I could see. It was three days before Christmas and on both sides of the border all was calm, all was California bright. “Just the way we like it,” the agent said.

At the southwestern edge of America, the border fence continues into the Pacific for 100 yards or so. Next stop, Shanghai. My cell phone flashed “Welcome to Mexico!” I glanced up at the huge Plaza de Toros bullring that towers above the border. Tijuana has worked hard to overcome its seedy reputation as a tourist trap selling souvenirs to norteamericanos. The city is now a thriving metropolitan area, with its own international airport, industrial parks, and condo developments. Tijuanistas are not happy about a politicized migrant march using their home town as a staging area.

But the march got lots of attention in the media, which is why my wife and I are here. After all that coverage of the troubles in Tijuana, we wanted to see what’s happening on the American side. That’s why others are coming, too, even though the automobile road to this part of the border is closed. Reaching the steel fence requires GPS assistance and a strenuous slog southward.

From Border Field State Park, it’s a three-mile round trip on foot, but a steady stream of visitors seemed willing to try. In the parking lot I met a man from Warsaw. “Poland has its own border problems,” he said. “I wish to see how America handles things.”

Parked beside him was a family of five from Australia. Mr. Aussie was also curious about the American side, though he confessed to feeling guilty about Australia keeping out Asian immigrants who arrive there uninvited, “in rickety boats.” Even using the word “rickety” unsettled him. “It’s probably the best they could do,” he said.

A van arrived with seven young people from India, who debated about making the walk to the border. “We want to see what’s happening,” said a man who had come to the U.S. to study at the University of Virginia. Now he worked for Amazon. “In India we are careful about borders,” another man said.

For many people, the long walk from the parking lot to a breathtaking view of pounding Pacific surf and circling seabirds is reward enough. A family of four from Turkey contemplated the additional hike down to the fence and decided to turn back. My wife looked south, shaded her eyes, and said, “Let’s try for the border.”

Plodding through the damp sand of a Pacific beach on a sparkling 70-degree day in December would be a memorable experience under any circumstances, but several things about the trek toward Mexico are somewhat odd. Just east of the Plaza de Toros, one of Tijuana’s newer neighborhoods spreads like a mirage across a distant hillside. The modern Mexican homes look out across the border at a lonely, unattractive corner of California that is all salt flats and scrub. Walking along the edge of this forlorn landscape toward silhouetted buildings in Tijuana was a reversal of the usual border narrative: we could be escaping a northern wasteland and heading toward civilization in the south. 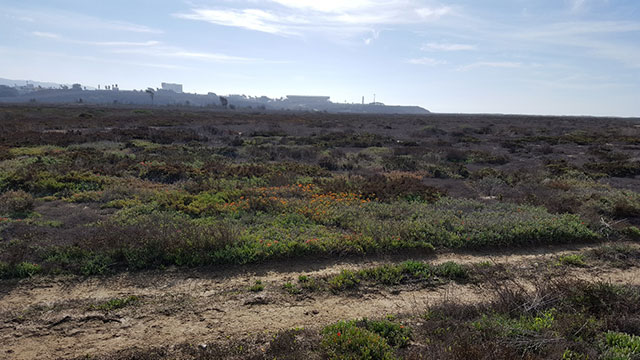 I expected to see signs on the beach warning against illegal entry into the U.S., but the only postings were polite requests to respect local wildlife. Halfway to the border we met a man from London and a kid from Iowa on their way back, but otherwise the beach was strangely empty. Surely, there had to be border surveillance somewhere along this vast expanse of American sand, if only to guard against marathon swimmers from Ensenada.

The only hint of how the border patrol might keep an eye on this huge beach could be heard overhead. The persistent buzz of a small aircraft engine passed back and forth several hundred feet above us, though nothing could be seen. I wasn’t quite ready to believe in invisible drones, and yet something about an international border heightens the imagination, transforming minor details into dramatic updates of Casablanca. If Bogart and Bergman had walked out of the surf with letters of transit for Lisbon, they would have been in character.

Thus it was that we arrived at the end of America, where we kept our rendezvous with the lone border agent from Brooklyn. The three of us held the U.S. line for almost half an hour until, as the agent had predicted, more visitors arrived on foot from the north. At the fence, and during our walk back to the car, I spoke with 11 people from India, four from Hong Kong, one from Britain, two from the Philippines, four from Mexico, eight from mainland China, along with Poles, Turks, and Australians, not to mention Texans, Floridians, Nevadans, and a girl on horseback wearing a Santa hat. They had all come to see the big story on the Mexican border. 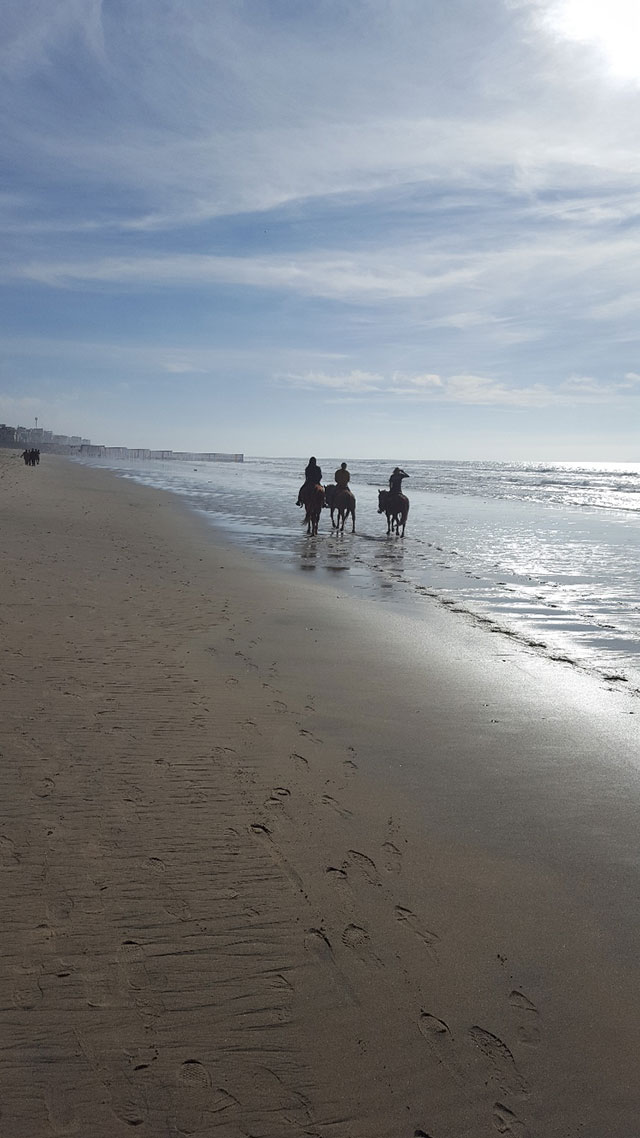 As it turned out, the border was quiet. But it didn’t matter, because the real story is that the border is almost always quiet: busy, but quiet. Despite attempts to manipulate the news and hijack American goodwill, the legal international crossing between San Ysidro and Tijuana remains the busiest in the world, with plenty of cross-border travel and trade. America’s immigrant roots are still holding strong, and its generous immigration rules, as well. The real story is that just about everyone in the mini international Christmas caravan that walked the sandy path south to the Mexican border agrees with Robert Frost, and with Donald Trump, too: Good fences make good neighbors.

Clark Whelton Remembering the 1957 Asian flu pandemic
from the magazine

James A. Gagliano Media coverage leads many Americans to believe that fatal police shootings are far more common than they are.
eye on the news

Soldiers for the Gender Revolution

Heather Mac Donald Guardians of the profession discard merit in order to alter the demographics of their field.
Saved!
Close