The Metropolitan Museum of Art is less a museum than a university—it’s also a big, messy place, as we know from its many public fumbles. In the last year alone we have seen its notorious move from free entry to a new $25-per-head admission charge hitting tourists; a big deficit despite a $3 billion endowment; and a failed, obscenely expensive $800 million building plan. All of this said, with the British Museum and the Louvre its only possible equals, the Met is widely considered the greatest museum in the world, and its research, publication, and art gathering acumen is peerless.

In its new show, “Armenia: Art, Religion, and Trade in the Middle Ages,” the Met is at its best. The museum has taken a subject unknown to most people and mobilized its curatorial expertise and international connections to present a gorgeous primer. The Armenian nation officially converted to Christianity in 301—the first time the new faith became a state church. Mount Ararat, the purported resting place for Noah’s Ark is there, too, making Armenia home to the world’s oldest spot of dry land. Through sweeping wall mural size aerial photographs of church sites, we get a sense of Armenia’s striking topography, mountainous and with steep cliffs falling to the sea. Few people will know the names of the churches, monasteries, and cities. Kars, Dvin, Haghpat, Etchmiadzin, and Ani were new to me, but no more.

The show begins with four-sided Christian commemorative columns, or stelae, from the 4th century, carved with elaborate reliefs of saints, demons, and princes. The carvings adorned a monastery and are among the finest examples of early Christian sculpture. Excavations from Dvin, an ancient Armenian commercial city, uncovered capitals decorated in an eclectic crossroads style, drawing a little inspiration from places as far flung as southern Italy, Kurdish regions, Constantinople, and Persia. Archaeology in Armenia is new; the Aygestan Hoard was discovered only in 1936, and its haul of exquisite gold jewelry from the tenth and eleventh centuries is well represented at the Met. Like most of the objects in the show, the necklaces, bracelets, and earrings have never before left Armenia. This exhibition is truly fresh.

Explaining the relationship between the Armenian Rite and its art is a big part of the show and the accompanying catalogue. Carved doors were more than room dividers. Doors in the Bible were metaphors for spiritual transitions; many Armenian services occur on both sides of doors, marking heightened states of blessedness as the service unfolds. They’re important and treated with great refinement in the show. Radiate crosses—crosses with arms of equal length, incorporating a sunburst—are distinctly Armenian symbols. They suggest the Tree of Life, eternity, and a victory of life renewed generation by generation, rather than Jesus’s suffering and sacrifice. Among the most beautiful and complex pieces in “Armenia” is an embossed reliquary with pearls and precious stones from the early fourteenth century. Some common forms, like arm reliquaries, descend from the Armenian Church’s early veneration of the right arm of its founder, St. Gregory the Illuminator. A silver arm reliquary of St. Nicholas from 1315 has an unsettlingly totemic presence. 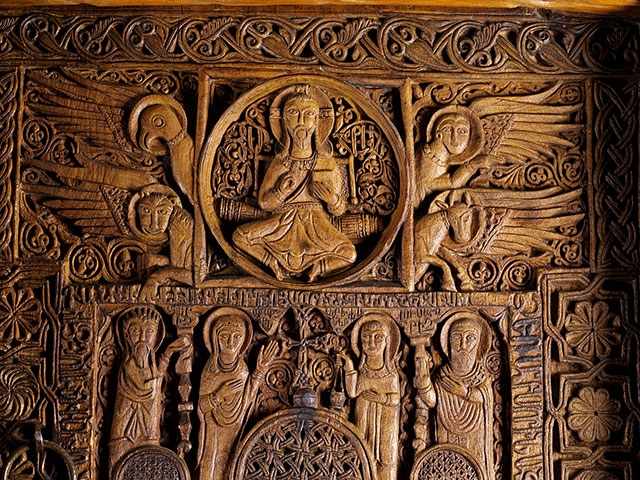 Surely, the most exquisite works in the show are the illuminated manuscripts. Lavishly decorated pages from the Tabriz 1311 Gospels combine Anatolian, Greek, and Italian pictorial traditions—the Silk Road ran through Armenia—while another manuscript from the same time, the Compedium of Chronicles, depicts a young Muhammad with kneeling camels, angels, and ample flourishes derived from Armenian style. I loved the pages from a sixteenth-century Book of Genesis from Keghi. God is not shown symbolically—with a disembodied hand reaching down through clouds, for instance—but as a big, bug-eyed head and gesturing hand. For each day of the Creation, this bible depicts God’s head growing bigger and bigger. A final page, marking the end of the Creation cycle, shows God’s head as small, flanked by a gate and appearing to recede from the world back to Heaven.

This and many other things in the show cried out for further context. How do they reflect the Armenian Church’s unique take on Christianity? Does this visual treatment of God suggest a conception less abstract and more visceral than other branches of Christianity? The show does a good job on details—a liturgical curtain from 1689 illustrates the sites in Jerusalem most central to the Armenian Rite—but why these are central and what they tell us about the Church’s spiritual priorities are left to us. Also, some good maps and timelines would have helped the viewer navigate Armenia’s complexity and strangeness. Perhaps the curators had a scholarly aversion to conveying such basic information, but it would help the viewer get to the show’s many pleasures. 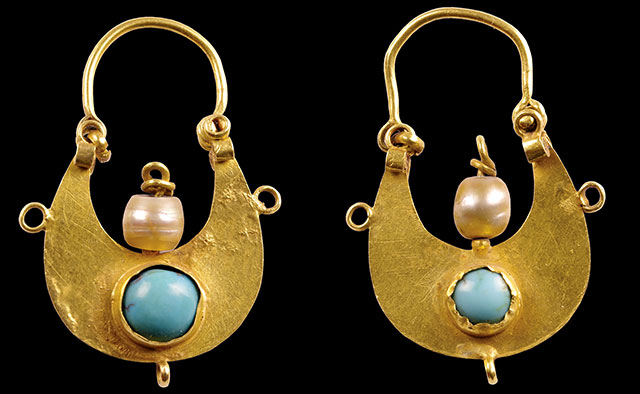 In almost every commercial hub in the world lived a small, vibrant Armenian community engaged in trade and commerce. This led to the most provocative theme of “Armenia.” The catalogue calls it “Armenian cosmopolitanism”—a mobility, curiosity, and mercantile spunk that made Armenians useful almost everywhere. They absorbed design inspiration wherever they went, making their art unique. Armenians in Isfahan in Persia were bankers to the Safavid shahs; their community has only recently been studied. They built impressive churches but also, with characteristic élan, invited Persian design into their Christian decoration. A page from an illustrated Gospel showing St. John the Evangelist is organized like an intricate oriental carpet with elaborate bands and borders. John is surrounded by the opening to the Cave of the Apocalypse, which is itself a swirling band framing the saint.

I think only the Met could do a show so deeply researched and so resplendent with major loans. It does credit to the museum, but also to Armenian-Americans who supported the show financially. They are part of a big community that thrives today and has enriched our country for generations. This exhibit spotlights an under-examined yet essential element of Western history and art.