Political elites don’t agree on much nowadays, but they do see eye to eye on two broad points: housing is too expensive, and restrictive land-use regulations make it so. New York’s leftist firebrand Representative Alexandria Ocasio-Cortez wants cities to liberalize zoning; so, too, does Indiana’s conservative Senator Todd Young, whose YIMBY Act would encourage zoning reform. Opinion leaders across the political spectrum have joined the bandwagon, from the socialists at Jacobin to the libertarians at Reason, from the institutional liberals at the New York Times to their conservative counterparts at National Review.

In a new study based on nationally representative surveys of urban and suburban Americans, we found that the mass public isn’t fully on board with this agenda. Asked to think about their city’s future, the vast majority of respondents across two surveys—Republicans and Democrats, homeowners and renters—say that they wish home prices and rents were lower. But they don’t generally subscribe to the other half of the elite consensus: namely, that restrictive zoning is to blame for high prices. What explains their reservations? We find that most people simply don’t believe that increasing housing supply would lower prices.

In our first survey, we asked about allowing “gentle density”—duplexes and triplexes—in neighborhoods of single-family homes. Our second survey posed a battery of questions about state preemption of local zoning, including proposals to accommodate more suburban homes on farms and open space at the urban fringe; more duplexes and fourplexes in neighborhoods of single-family homes; or more apartment and condo buildings near transit and bus stops. Only the transit-oriented development proposal received clear majority support.

Respondents who said that they wanted lower housing prices were more supportive of “up-zoning” than those who wanted housing prices to stay the same or rise. But the differences weren’t large. In fact, they pale compared with the difference in support (across all groups of respondents) for transit-oriented development relative to sprawl or modest density in neighborhoods of single-family homes. (See Figure 1 below.) 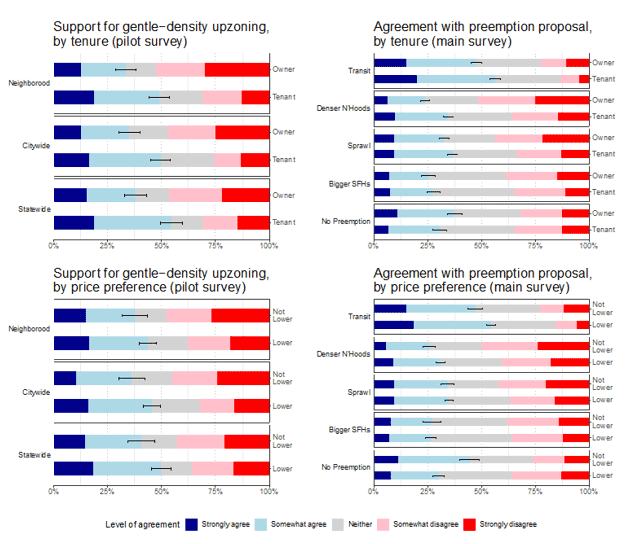 Why aren’t renters—and other people who say they want lower prices—more supportive of up-zoning? Part of the answer is that many people think that even a large increase in the production of new homes would have no effect on the prices of existing housing, or that, in some cases, it might even make existing housing more expensive. In this case at least, the “folk economics” of the mass public does not line up with the standard view of professional economists.

In the first survey, we asked respondents to predict the effect on prices and rents for existing homes of a 10 percent increase in regional housing stock caused by the removal of development restrictions. Only about 30 percent of respondents thought the supply shock would lower prices or rents. We were so surprised by this finding that we thought it might be due to an idiosyncratic feature of the survey question, or perhaps just guessing by respondents who didn’t know what they thought. So we replicated the survey, randomizing the cause of the supply shock (technological change, or state preemption of local restrictions on either suburban expansion, apartments near transit, or duplexes and fourplexes in neighborhoods of single-family homes). We also elicited price and rent predictions in several ways, and we posited different future prices in the absence of the up-zoning. None of these distinctions mattered much. Across all the survey variations, only a minority of respondents predicted that a large, positive supply shock would exert downward pressure on home prices and rents.

We also asked respondents whether they were confident in the direction of their price and rent predictions. Only a quarter said that they were “confident” or “very confident,” but the confident were no more likely than the self-doubting to predict that more housing would translate into lower prices.

The bottom line is that, however we subset the data—by tenure, by desired future housing prices, or by confidence in one’s prediction—only 30 percent to 40 percent of respondents subscribed to the conventional economics view that a big, exogenous bump in housing production would cause future prices and rents for existing homes to be lower than if the additional production did not materialize. (See Figure 2 below.) 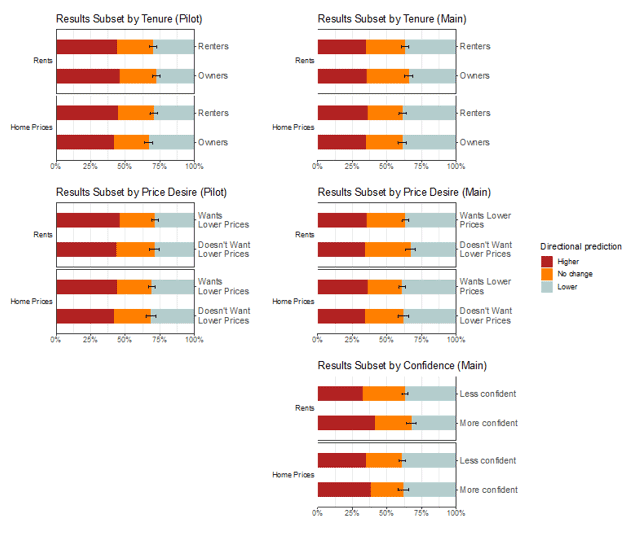 Are these results just a manifestation of general economic ignorance? No. We also surveyed respondents on their beliefs about the price effects of supply shocks in the markets for cars, grain, and labor, as well as the price effects of free-trade agreements. On these questions, directionally correct responses outnumbered directionally incorrect responses by a margin of at least two to one.

The answers to our question about cars were particularly striking. (“If supply-chain problems cause automakers to produce fewer new cars, what happens to the price of used cars?”) Like our housing supply-shock scenarios, this question asks how changes in the supply of a new, durable consumer good affect prices for the secondhand version of the same good. Approximately 85 percent of respondents said that a negative shock to the production of new cars would cause the price of used cars to rise, whereas less than half as many anticipated that a positive shock to the supply of new homes would cause the price of used homes to fall. (See Figure 3 below.) 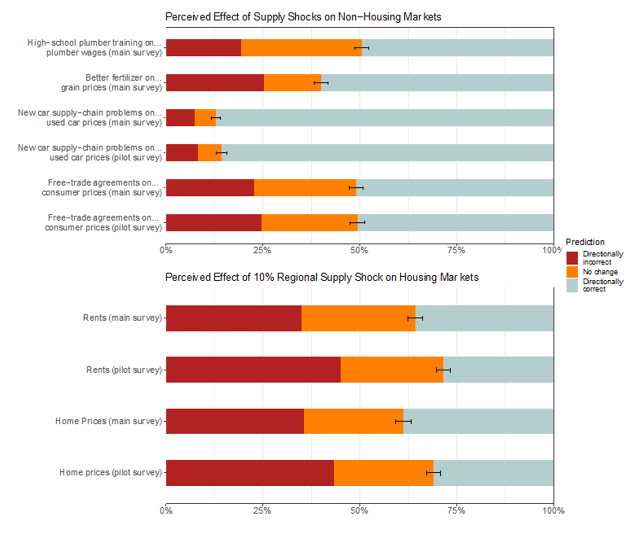 If ordinary people don’t think that a building boom unleashed by the removal of development restrictions would make existing homes more affordable, what do they think the government could do to make housing more affordable? We are investigating this question now, but meantime, we have one suggestive finding from our current paper. We asked respondents to designate up to three actors as being “responsible for high housing prices and rents in your area.” Developers and landlords took the brunt of the blame; environmentalists and anti-development activists got off scot free. (See Figure 4 below.) 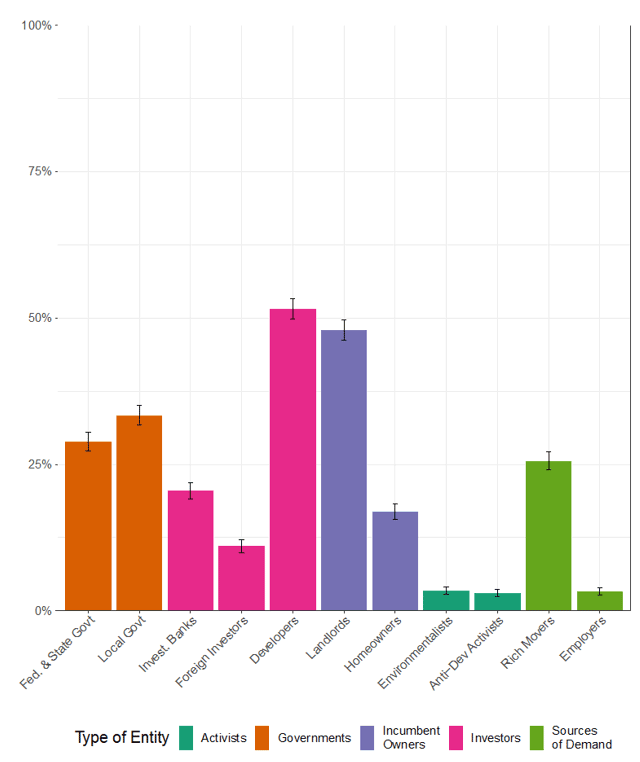 If people who want lower housing prices navigate their uncertainty by voting against developer-endorsed policies and candidates, they risk undermining their own objectives. Developers care about making money, not increasing supply as such, but unless developers can make money by building on greenfields or redeveloping infill sites, the regional housing stock won’t grow, and prices won’t fall.

Our study points to a new explanation for the persistence of housing shortages in high-demand regions. Political scientists and legal scholars often attribute the shortage to local collective-action problems. Decisions about whether to approve housing developments are made piecemeal, by small local governments, and are generally discretionary. Nearby homeowners—whose property values may be affected by local externalities such as noise, congestion, or “unwelcome” newcomers—have a lot at stake in individual projects, and they make their voices heard. Renters and business interests would benefit from more supply, but because the market-wide price effect of any one project is minimal, it is not worth their effort to organize for individual projects.

This is a powerful account of local political dynamics, but it doesn’t explain why the states have done so little to curtail local discretion over housing development. Our study suggests that states have done little because there’s not yet widespread public support for preemptive state up-zoning. And this lack of support is probably due in part to misunderstandings about the effect of building more housing on prices and rents for existing homes.

That said, our study raises as many new questions as it answers old ones. While we found that renters (and people who said they want lower prices) were more supportive of up-zoning if they believed that it would lower rents, we’re not yet sure whether this relationship is causal. Nor do we know yet whether people will update their beliefs about price effects in response to new information, or, if they do, what kinds of information would be most helpful. And our study doesn’t reveal much about the experiences, outlooks, or “mental models” distinguishing people who believe that more housing would translate into lower prices from people who do not. All this and more remains to be investigated.

What we can say with confidence is that the mass public does not believe that housing is governed by the normal laws of supply and demand, and that this instinct gets in the way of the affordable future they desire.

Christopher S. Elmendorf is Martin Luther King, Jr. Professor of Law at UC–Davis. Clayton Nall is associate professor of political science and (by courtesy) geography at UC–Santa Barbara. Stan Oklobdjiza is visiting assistant professor of public policy at UC–Riverside. The survey research for their new paper, “Folk Economics and the Persistence of Political Opposition to New Housing,” was supported by the Manhattan Institute and the UCSB Pahl Initiative.

Christopher S. Elmendorf With modifications, they can advance worthy goals while increasing minority representation.
eye on the news

Christopher S. Elmendorf California’s SB 50 is a model for addressing the urban housing crisis.
More on