Battle of the Titans

This past Good Friday eve, a crowd composed mostly of Gen-Xers and millennials filled the Sony Centre in downtown Toronto. They had travelled from as far away as Dublin, Austin, and Budapest to attend a much-hyped “duel of the century,” as one of the duelists called it. The debate, titled “Happiness: Marxism vs. Capitalism,” pitted Jordan Peterson against Slavoj Žižek, two of the West’s reigning public intellectuals. Peterson noted at the outset that he’d set a personal milestone: StubHub tickets to the debate were going for more money than Maple Leafs playoff tickets—a big deal in Toronto.

In disposition and comportment, the contrast between the two approached caricature: Žižek, the aging Slovenian enfant terrible, slumped in his chair in a rumpled polo, sneering at being introduced as a “dazzling theorist”; Peterson, the upright Canadian in a three-piece suit, diligently taking notes on his laptop. But the two have similarities, for each has parlayed academic research—Peterson in social psychology, and Žižek in philosophy, psychoanalysis, and theology—into global stardom. Žižek’s fame derives from his interpretations of popular culture and film, documented in The Pervert’s Guide to Ideology and other works, while Peterson has built a legion of devoted followers based on Biblical commentary and self-help insights in his best-seller 12 Rules for Life. Both have also been lauded and despised in equal measure for their rejection of political correctness.

On his YouTube channel, Peterson announced that in preparation for the debate, he was reading The Communist Manifesto, “the original source of the troubles.” No surprise, then, to hear his opening statement, presenting “ten propositions” in the Manifesto with which he disagreed. A few of his critiques were underwhelming—biological determinism as a counter-argument to Marxist class struggle; inequality in animals as proof that inequality in humans is inherent. Some better arguments followed: economics can’t be reduced to moral claims, as Marx tries to do; a dictatorship of the proletariat is no better than capital as a principle of organizing society; profit is a useful incentive for avoiding stupidity. Peterson rounded out his remarks with some statistics: the rich are getting richer under capitalism, true, but the poor are getting richer, too.

After Peterson’s 30-minute opening statement, the philosopher from Ljubljana came out swinging: “I’m supposed to defend the left-liberal line against neoconservatives. Really? Most of the attacks on me are precisely from left-liberals. I’m sure if the leading figures amongst liberals were asked if I were fit to speak for them, they would turn in their graves even if they were still alive.” This was stock Žižek. (At a talk that he gave at an bookshop in Tel Aviv some years ago, which I attended, he shocked a crowd of Israeli anti-occupation activists by reminding them that West Bank Palestinians enjoyed far better access to food, water, sanitation, electricity, and conveniences than the vast majority of the world’s Arabs.)

Žižek made a few freewheeling comments on China, the source of most of Peterson’s optimistic development statistics. Indeed, the whole matter of China’s ascension as a Communist-capitalist state would seem to render the premise of the debate moot. Žižek dismissed the question of happiness outright—a “sort of grace, and not a valid goal of human action”; Peterson agreed “deeply” that happiness as such cannot be socially engineered.

Regarding the stated topic of the evening—Marxism and happiness—Žižek refused to defend Marx. Žižek has no use for linear propositions, but trades in inversions and juxtaposed contradictions: for him, since capitalism and liberal ideology are the air we breathe, our rational inferences are inherently suspect. This should explain why he announced in fall 2016, to the Left’s horror, that he would vote for Donald Trump, since a Trump presidency at least might trigger the potential for a revolutionary awakening from the neoliberal fantasy of liberty. (Žižek is obsessed with the Matrix, in particular the notion of anything that might act as a red pill to shock us out of status quo consciousness.)

Žižek ended up half-heartedly pronouncing the need for a “regulated capitalism” and “new forms of international co-operation and so on,” dismissing claims that such a possibility was utopian, in that capitalism is already regulated in ways that favor capital. Immediately, as though disgusted to utter such banalities, he raced to his conclusion that “we will probably slide towards some sort of apocalypse, awaiting large catastrophes to awaken us.” Peterson nodded.

The dramatic climax of the evening occurred when Žižek asked Peterson for evidence of the “postmodern neo-Marxists” he has spent the last few years publicly decrying. Who are they? Peterson identified the French “radical Marxists, like Derrida and Foucault,” who substituted identity politics for the proletariat-capitalist antagonism when the news of Stalin’s terror emerged. Žižek’s reply was lightly devastating: “It’s so strange that you mentioned Foucault. Are you aware that his main target throughout his life was Marx?” But Peterson is essentially correct: Foucault was greatly influenced by Marx, despised bourgeois society passionately, and worked squarely within a Marxian paradigm. It’s not inaccurate to describe him, particularly to a general audience, as a “postmodern Neo-Marxist.”

A few inversions of the evening: the stoic Northern Albertan Peterson articulated a starry-eyed vision of human dignity, defending the vital deference of liberal democracy to individuals as “sovereign in their own right and a locus of ultimate value and decision-making.” Žižek, by contrast, questioned the existence of unconditioned human volition, given that ideology is “our spontaneous relationship to our social world,” as well as the fact that we lack even a basic “cognitive mapping” of where we are and where we’re going.

Yet Žižek also managed to bring Peterson, the self-described “deeply religious person,” to tears with a solemn exegesis of G.K. Chesterton’s theology on the radical transformation of human consciousness occasioned by Christianity. Some useful intellectual friction on the topic of individual agency finally showed up towards the end of the debate: to Žižek, it’s as useless to tell an unhappy American, under liberal democracy, to “set his house in perfect order” (Peterson’s Sixth Rule for Life) as it would be to say the same to someone in North Korea. “What if the way your house is in order is determined by the ways in which society is messed up?” he asked. At the level of the human soul, liberal democracy to Žižek is as false as worship of the Great Leader; ideology always interposes between individual consciousness and action.

Peterson insists things are less dire, and that our possibilities for growth are not foreclosed. Yes, a single relationship between husband and wife in 2019 is a microcosm of the broader tensions between men and women today. But, he avers, in working out a single heterosexual relationship, you will gain accurate insight into the global disorder. “If you take a personal problem seriously enough,” says Peterson, “you will simultaneously solve a social problem . . . and you’re punished for your own goddamn mistakes.” Peterson encourages his mostly-male audience—for whom he has become an internet father-surrogate—to assume ownership of their own disarray as a first step to “sorting yourself out.” His core message of personal responsibility, once taken for granted in the West as necessary for growing up, is now so unfamiliar as to sound revolutionary.

For Žižek, this is weak gruel and obscures the ways in which social norms, pathological behaviors, and ideological subterfuges are knitted together. In spite of living in the era of sexual permissibility in the West, for instance, impotence and frigidity remain rampant. Ideology works, even if you don’t believe in it, like the physicist Niels Bohr’s horseshoe hung above his doorway to keep away evil spirits. We’re driven by so many tangled implicit beliefs that Peterson’s bootstrapping amounts to silly nostalgia.

Students of Žižek know that for him, the most important, and terrifying, lesson of modernity is that “there is no Great Other.” There is no external locus of order to return to, no God. It would have been interesting to hear Peterson, whose notions of “order and chaos” and “negotiated morality” rest on the premise of a harmonious, even divine, nature of things, engage with Žižek on this last point. It would also have been useful to hear some discussion of how automation, ecological disasters, and neuro-computing—about all of which Žižek has written—might somehow deliver a fatal blow to capitalism. But by this point, he seemed to have given up and settled into the role of jester, hands up in a begging gesture to Peterson: “Can’t you see I’m trying to solicit from you a joke?” 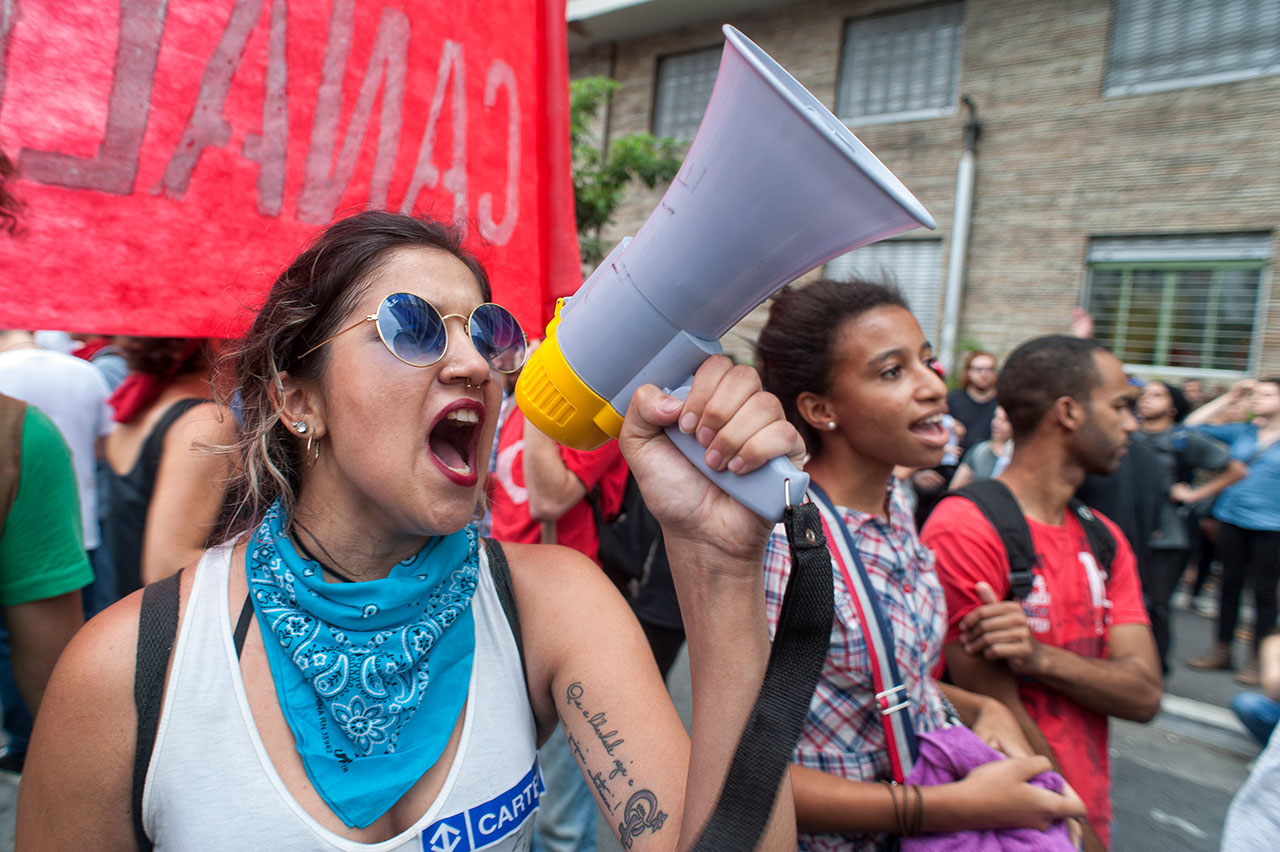 Good Luck With That

Joanna Baron, Jerry Gibbon A radical feminist wants to undo masculine authority, though she never quite explains how.
from the magazine