Almost twenty years ago, on a scorching July evening, John F. Kennedy, Jr. and his sister-in-law, Lauren Bessette, battled Friday rush-hour traffic to reach New Jersey’s Essex County Airport. Kennedy’s wife, Carolyn, arrived separately in a chauffeured sedan, having purchased a dress for the wedding of Kennedy’s cousin, Rory, the next day. Kennedy, whose cast for a broken ankle had been removed the morning before, was eager to fly—his stiff leg and relative inexperience as a solo pilot didn’t postpone takeoff. Their nighttime flight to Martha’s Vineyard, through disorienting fog, would be their last. Kennedy’s death, at 38, was a grim addition to his family’s tragic history.

It wasn’t a Kennedy’s first fatal plane crash, nor a family member’s last reckless act. But John’s sudden end, like his father’s assassination, preceded an extended period of national volatility. And in different ways, both Kennedys ushered in an era in which American politics and culture intersected. On the campaign trail and in the White House, John F. Kennedy mixed charisma with celluloid, his presidency buttressed by magazine glamour, star-packed dinners, and an obliging press. Kennedy’s son entered the world two weeks after the 1960 election. Within three years, John-John became a household name when he saluted his father’s casket. In adulthood, Kennedy Jr. proved at ease among reporters, despite his mother’s protectiveness. It seemed fitting that the 35th president’s son, followed by paparazzi from an early age, would conceive a magazine that combined politics and celebrity.

When Kennedy shopped George around New York media circles as a “post-partisan” magazine, named after the first U.S. president, his legal career had faltered and his mother was gone. Numerous publishers turned Kennedy down, but David Pecker, then president of Hachette, readily agreed, believing that the handsome heir, as editor, could attract readers—and advertising dollars. The first issue, with model Cindy Crawford dressed as Washington, landed in September 1995. At a kickoff news conference in Manhattan’s Federal Hall, Kennedy stood with Pecker and cofounder Michael Berman before a media mob. “I haven’t seen so many of you in one place since they announced the results of my first bar exam,” Kennedy quipped.

Startup magazines usually bomb, but George enjoyed a blockbuster debut. The first two issues set publication records, with a combined 350 ad pages. The inaugural issue, with a cover price of $2.95, sold 97 percent of its 550,000 newsstand copies. Kennedy believed that his nonideological magazine, heavy on entertainment, was a winning formula. He told the New York Times that his generation, the youngest cohort of baby boomers, viewed politics “as another aspect of cultural life, not all that different from sports and music and art.” George’s target audience was the young and affluent. By 1996, the average George reader was 36, with a median household income of $65,000. Over 90 percent were college-educated, and 60 percent were women. A year later, with a circulation of 400,000, George was the country’s largest political magazine. 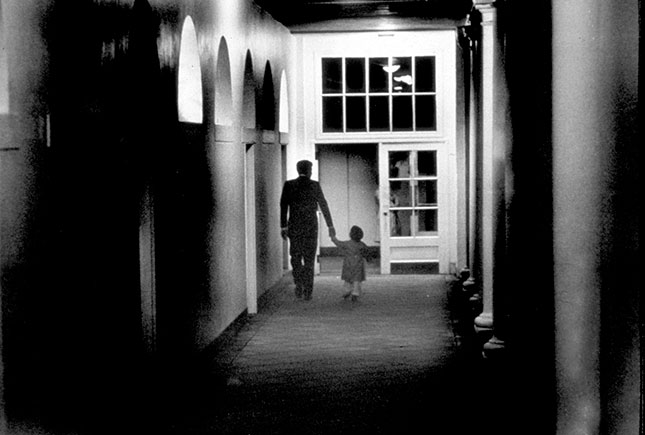 From the beginning, though, the magazine had an identity crisis. At its launch, George “probably received more prepublication coverage than most magazines receive in their lifetimes,” a Times reporter observed. “They said it would reveal the people behind the scenes and be a kind of MTV of politics,” she added. “Few could figure out what all that meant.” Subsequent covers—George Clooney dressed as Washington, Harrison Ford sporting a Lincoln getup, Drew Barrymore imitating Marilyn Monroe—clashed with serious attempts at journalism. But its pages revived legends and elevated new stars. The magazine featured Norman Mailer, employed Ann Coulter, and interviewed a young pollster named Kellyanne Conway, who discussed “why female and Generation X voters are ripe prospects for the GOP.”

George ultimately focused more on popular culture than politics. When Kennedy died, 42 issues had appeared, only three featuring covers of political figures. During the Clinton-Lewinsky scandal, Kennedy missed his best opportunity to fulfill, and profit from, his magazine’s mission. “Of the twelve issues published during the yearlong uproar,” The New Yorker’s Hendrik Hertzberg noted, “six contained not a single feature about it.”

By late 1998, George’s ad pages had nosedived 20 percent, compared with the previous year. “It’s my name in the editor in chief position,” Kennedy said in 1996. “And if the magazine works or doesn’t work, people will say, it’s John Kennedy’s magazine.” It wasn’t working. Editorial infighting, corporate intrigue, and financial trouble imperiled its future. Its target demographic didn’t help matters. George was “a political magazine for people who don’t like politics,” a former contributor told the New York Observer. “When you look at George, you’re like, ‘It needs something,’ ” said a contributing editor.

A week before his death, Kennedy had copiloted his Piper Saratoga to Toronto for a meeting with potential new investors. The publisher, Hachette, planned to cut financial ties with the magazine. Pecker, who had started a magazine for Donald Trump’s hotel properties the previous year, had recently become chairman of American Media, owner of the National Enquirer. George’s future now relied on Canadian investors. Kennedy was optimistic, but his death sealed the magazine’s fate.

For a time afterward, George continued to publish its peculiar brand of politics and celebrity, featuring a cover of Trump in 2000. A morbid fascination with Kennedy’s death even increased circulation, with a 148 percent jump in the final months of 1999. But news was moving too quickly in the dawning Internet age, and the magazine couldn’t keep up. It had become interesting mostly as a collector’s item; early issues sold on eBay for $200. George folded in early 2001.

Within weeks of Kennedy’s death, a new magazine—called Talk—promised to transform media with its focus on celebrity interviews. An opulent party at the Statue of Liberty, reminiscent of George’s launch, suggested happy days ahead. But general-interest magazines had already begun their precipitous decline. “It was the end of something extraordinary, but none of us knew it at the time,” former Talk editor Tina Brown told the Times. “What followed was a very turbulent odyssey, not just for me, but for all of us. There has been a volcanic realignment that none of us foresaw.”

Kennedy’s message—politics as culture—seems even more fitting in 2019. A different medium, reality TV, paved the way for Donald Trump’s political rise, as George’s tagline—“Not Just Politics as Usual”—became a prophecy fulfilled. Yet the present political scene departs from Kennedy’s idea in a fundamental respect. An ideological conflict, fueled by media, keeps the public enraged, and post-partisanship seems more distant than ever. Kennedy wouldn’t have liked it, but unintentionally, he helped make it happen.