What will they say about us when we’re gone? We’ve all wondered at one point or another. But in the age of social media, in which seemingly everyone wants to be a star, we should keep in mind that being remembered can have more pitfalls than being forgotten.

Consider Ty Cobb, one of American sports’ legendary characters, whose greatness on the baseball diamond—he played from 1905 to 1928, mostly for the Detroit Tigers—was eventually overshadowed by stories about his fanatical racism and violence, which, in some accounts, even included homicide. Over two generations, Cobb has been portrayed as a virtual psychotic in articles, books, and films, including Ron Shelton’s 1994 feature starring Tommy Lee Jones and Ken Burns’s epic, 18-hour documentary, Baseball, in which Cobb plays the villain to Jackie Robinson’s hero.

There’s only one problem: this venomous character is predominantly fictional. In Ty Cobb: A Terrible Beauty, published last year, Charles Leerhsen documents how Cobb’s wicked reputation largely dates to the years after his death in 1961, when sportswriter Al Stump created a mythical Cobb—“Ty the Ripper,” Leerhsen calls him—who displaced the real man in the public mind. Stump’s motives for spinning tall tales seem to have been financial. He had ghostwritten a careless autobiography for Cobb, who tried to stop its publication before his death. The book sold poorly, but Stump earned a handsome fee for a lurid magazine article filled with falsehoods, dubious quotes, and made-up incidents. Other writers repeated or expanded on these untruths over the years. “The repetition felt like evidence,” Leerhsen says. It was “well known,” director Shelton told Leerhsen, that Cobb had killed “as many as” three people, though the director didn’t explain how this was known. Drawing on Stump’s work, as well as a 1984 biography by Charles Alexander, Burns also helped enshrine Cobb’s demonic image.

Time and again, what Leerhsen discovered through exhaustive research undermined the Cobb created by Stump, who didn’t source his work (“because he produced fiction,” as a contemporary said). Leerhsen could find no tangible evidence that Cobb hated blacks. On the contrary, he spoke in support of baseball’s integration when asked—and he wasn’t asked, as best Leerhsen can tell, until 1952. “The Negro should be accepted and not grudgingly but wholeheartedly,” Cobb said then. “The Negro has the right to compete in sports and who’s to say they have not?” On another occasion that year, he said: “No white man has the right to be less of a gentleman than a colored man. In my book, that goes not just for baseball but for all walks of life.” The virulent racist of legend, supposedly driven to derangement if even touched by a black man, attended Negro League games, threw out a first pitch, and often sat in the dugouts with black players. He came from a family of abolitionists. He endowed educational scholarships for students of all races.

Leerhsen concedes that Cobb was complex and troubled, and while he debunks many incidents, he confirms others, such as an awful episode in 1912, when Cobb rushed into the stands to pummel a handicapped fan who had abused him verbally. Cobb was no one’s idea of easygoing, and his notoriety as a fiery (and fighting) competitor was well earned. But he didn’t sharpen his spikes before games to slash his opponents, as the myth has it. His peers didn’t regard him as a dirty player and they didn’t universally despise him, though many disliked him. The old ballplayers whom Lawrence Ritter spoke with for his 1966 oral history of baseball’s early days, The Glory of Their Times, criticize Cobb—mostly for being short-tempered and too quick to take offense—but none suggests that he was racist or otherwise hateful, and some liked him fine. 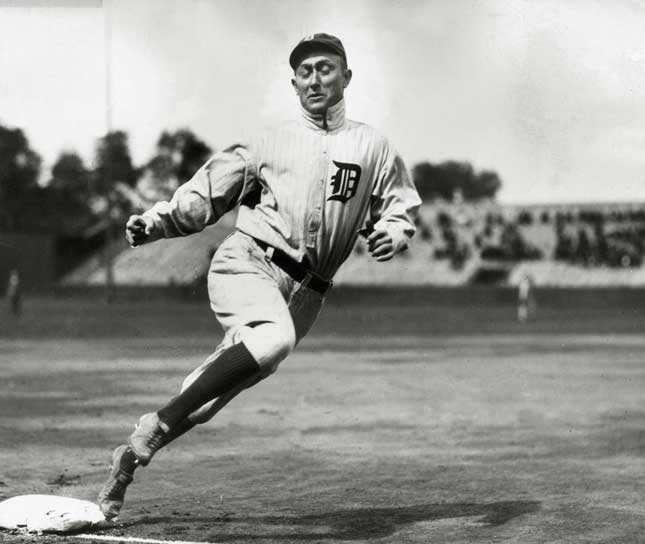 What is at issue is not Ty Cobb’s sainthood but Ty Cobb’s humanity. This posthumous character assassination makes Stump something like an upside-down version of Parson Weems, who, in a later edition of his Life of Washington, originated an American folktale about Young George and the cherry tree (“I cannot tell a lie”). Weems’s work helped shape Americans’ heroic view of Washington—though Washington’s career made that pretty easy—and the cherry tree endures in our culture as a parable about honesty.

Leerhsen wonders whether Stump’s Cobb might endure because people enjoy monster stories and feeling morally superior. It’s also conceivable that, in today’s climate, those disposed to seeing racism as fundamental to everything that happens in America might see Ty the Terrible as too valuable a scoundrel to let go. Racially charged events in recent years have shown how facts don’t intrude on the views of those who make up their minds regardless of evidence. Clinging to a preferred narrative about someone long dead is comparatively easy, especially when he’s a white Southerner.

The defaming of Cobb dramatically illustrates the written word’s power to exalt or slander, educate or mislead, and how the consequences of a writer’s moral choices can play out for generations. No more damaging accusation exists in modern America than that of bigotry. Once levied, it is a charge reluctantly retracted, and the dead have a particularly hard time winning acquittal.

Leerhsen’s book also reminds us that there is no substitute for truth and independent judgment. His work could become a case study in sourcing information and vetting conventional wisdom. If commonly repeated facts can’t be substantiated, then their acceptance involves something other than scholarship.

Finding out that the Cobb myths are mostly wrong is a bit like discovering that Charlemagne lacked ambition or that Jack Kennedy didn’t like girls. Leerhsen’s rehabilitated Cobb will take some getting used to, and it remains to be seen how these revelations are absorbed in a culture otherwise eager to make shows of contrition for past misdeeds—at least when the targets of such compassion are politically safe. Philadelphia has formally apologized to Jackie Robinson for its racist treatment of the player when he appeared in that city. One wonders what comparable gesture could be offered to Cobb’s descendants for the calumnies that have tarred him in American memory. Perhaps Ken Burns has some ideas.

In the meantime, it won’t hurt to remember the simplest of lessons. In Leerhsen’s words: “Just because you’ve heard something a thousand times doesn’t mean it’s true. Did you know that it’s not even true that your hair and fingernails keep growing after you’re dead?” Lies do.

Paul Beston Fifty years after the infamous crimes of his “family,” Charles Manson haunts American culture—but now Quentin Tarantino has something to say about that.
audio