On the evening of November 9, 1989, the wall of shame was breached. The next morning, I took off for Berlin; shortly afterward, I experienced the Velvet Revolution in Prague, and finally the fall of Ceauşescu in Bucharest. The year 1990 opened joyfully for the human race. But I was struck by the difference in the emotions felt in the East and in the West. Representative of the West was Francis Fukuyama and his idea, which caused a sensation, that history had just come to an end. But those in the East realized that this was far from the case. Less than a month before the Berlin Wall fell, I had given a speech in front of Chancellor Helmut Kohl and the cream of the Federal Republic of Germany in honor of Czech dissident Václav Havel, who was receiving the Frankfurt Book Fair’s prestigious Peace Prize while still a prisoner in his own country. I entitled the speech “To Leave Communism Is to Enter History”—the view of those emerging from behind the Iron Curtain.

The West’s confusion arose because it wasn’t prepared for such a fundamental unsettling of postwar geopolitics. During four decades of ideological confrontation, theoreticians and journalists had argued about how a society should move from capitalism to socialism. There was no research on the opposite question—that is, on the transition from socialism to capitalism—apart from a few inconclusive studies, most notably in Poland, concerning the possibility of introducing some elements of the free market into a Communist society. As the philosopher Josep Ramoneda has observed, the whole world—Communists, anti-Communists, and those in between—took it as given that the Soviet Union and its satellites could not “return” to capitalism. So when, during the Velvet Revolution, demonstrators posed exactly this question—How can we go from socialism to capitalism?—there was no ready answer.

As Western intellectuals watched Berlin in November 1989, they reconsidered their long belief that the world was fated to be Communist—but retained their belief in fate. Providence had at last spoken, chance was abolished, the terrible parenthesis of the twentieth century had closed. Forgotten, erased, transcended, surpassed were 1914–1989, the bloodiest and cruelest 75 years of the human adventure to date. Tocquevilleans rediscovered the ineluctable movement of universal democracy; Saint-Simonians passed on to ecologists the promise that the administration of things would replace the government of men; Hegelians like Fukuyama celebrated the End of History and of history’s wars; Social Democrats promised that understanding among peoples would grow. We were entering the peaceful, postmodern Promised Land, where great heroes, great dangers, great peoples, and great goals would all disappear, as Jean-François Lyotard, author of The Postmodern Condition, notoriously argued. The end of the Cold War plunged the “free world,” as it had been called, into a boundless euphoria. Western Europe immediately eliminated its military budgets, while Washington announced a “new world order.”

The other Europe, just emancipated from Moscow’s domination, did not share this optimism. The peoples extricating themselves from totalitarian despotism were at the same time rejoining history as freely choosing agents.

And they found before them two possible futures. One is symbolized today by Havel and Lech Walesa, Charter 77 and Poland’s Solidarity; the other by Slobodan Milošević and Vladimir Putin. 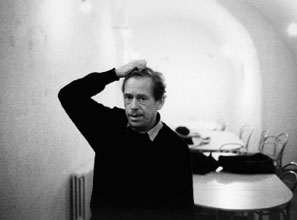 Czechs and Serbs faced the same post-1989 challenges as they confronted the dismantling of Czechoslovakia and Yugoslavia. In Prague, widespread poverty and corruption tempted the antitotalitarian dissidents whom the Velvet Revolution brought to power to choose repression rather than democracy. Their ultimate decision, though, was decisive: freedom would be the highest priority. Slovakia and the Czech Republic separated without conflict, and in the end, both entered the European Union. In Belgrade, by contrast, a sly and corrupt Communist bureaucrat seized power. Milošević forged an alliance of various forces of repression against the contagion of liberty. While he set aside Marxist ideology, he preserved its coercive methods. Wars and waves of ethnic cleansing ravaged Yugoslavia from 1991 to 1999. Milošević proved ready to spill blood in order to regain lost territories, and he ended up in The Hague, facing charges of crimes against humanity.

Ecstatic Westerners dreamed that the period of totalitarian cruelty was over, as if former Soviet bureaucrats could somehow emerge as new men, despite 70 years of brainwashing, or as if the chaos of radically nationalist dictatorships would easily resolve itself. But no great political savior awaited, Havel argued; Czechs were left to their own responsibilities, to “the power of the powerless,” to what the Czech philosopher Jan Patočka, who inspired Havel, called the “solidarity of the shaken”—of those, that is, shaken by totalitarian regimes and devoted to opposing them.

More recently, we have seen this solidarity in the democratic uprisings in Georgia in 2003 and in Ukraine in 2004, which should have drawn the attention of those who remained deaf through 12 years and 200,000 deaths in the martyrdom of Chechnya. In Ukraine, President Putin intervened shamelessly in the affairs of a state whose independence he refused to recognize. In Georgia, he sent in the tanks. Responding to the international press, Putin denounced the peaceful uprisings that swept away post-Soviet puppets in Tbilisi and Kiev as “permanent revolution” and “its dangerous disorders.” Thus he defamed a liberating uprising of long duration, one that started in the blood of East Berlin in 1953; continued in Poznań and Budapest in 1956, in Russia with the dissidence of the sixties, in Prague in 1968, and in the struggle of Solidarity in the 1980s; and was crowned by the fall of the Berlin Wall.

It is an uprising that in Poland brought together Catholics and freethinkers, at odds for more than a century, who together founded Solidarity. In Russia, moderns like Andrey Sakharov and traditional believers like Aleksandr Solzhenitsyn worked side by side. In Prague and Bratislava, university professors, instead of teaching the official lies, chose to be window washers or furnace repairmen, and Charter 77 brought together the Left and the Right, skeptics and the religious. Antitotalitarianism cultivates its own convictions, without sectarianism; dissidence does not attempt to replace the official dogma with another one but instead introduces an intellectual revolution that precedes—and that alone makes possible—the social and political changes that will remake the map of Europe.

This revolution has not ended, which is why the Kremlin does not appreciate insurrections in Georgia and Ukraine. Europe’s new frontier is at stake on the uncertain terrain of history, and the alternatives are still these: Havel and Milošević.

André Glucksmann is a French philosopher. His story was translated by Alexis Cornel.

“Polemos Is the Father of All Things”

André Glucksmann, Monique Canto-Sperber A dialogue on war and morality
from the magazine

André Glucksmann The force that brought down the Twin Towers hasn’t been defeated.
from the magazine

The End of Fatalism

André Glucksmann Arab revolutions remind us that nothing is static or guaranteed.
More on