I do not wish to enter this controversy, in part because
of sheer cowardice. The convinced Baconians, Oxfordians, and Marlovians—those who believe that Francis Bacon,
Edward de Vere, and Christopher Marlowe were the true authors of those plays and poems ascribed to Shakespeare—have usually come to their conclusions by means of minute and painstaking, even obsessive, scholarship, using every technique from textual and historical analysis to cryptography and numerology. They do not take kindly to the casual denigration of their efforts by people who assume without further ado that the two Shakespeares were one and the same man.

However, one argument in the controversy interests me, common to all those who oppose the Stratfordians (as the Baconians, Oxfordians, and Marlovians somewhat derisively call those who believe that the two Shakespeares were one): that the plays’ author was so understanding of every aspect of human nature, and so intimately knowledgeable about so many fields of human endeavor—as well as about all the strata of the society in which he lived, including the highest—that he could not have been a mere grammar-school boy from Stratford. The author must have had much more formal education than that.

Many books have over
the years commented on Shakespeare’s knowledge of soldiering, sailing and navigation, the law, and so forth; and I have accumulated a small library of books, both British and American, written over the last century and a half, by doctors commenting on Shakespeare’s medical knowledge.

For the most part, these volumes are compilations of every conceivable medical reference in Shakespeare, arranged by play, by disease, or by relevant medical specialty. They include Ernest Jones’s famous—or perhaps “notorious” would be a better word—analysis of Hamlet’s Oedipus complex, and a much more recent volume on Shakespeare and neurobiology. The general tone is respectful astonishment at the accuracy of many of Shakespeare’s medical observations.

No medical author, as far as I know, has suggested as a consequence that Shakespeare must have had a medical training, though many have suggested that he might have picked up medical knowledge from his son-in-law, a university-trained physician. His name was Dr. John Hall: he held a degree from Cambridge and probably had studied on the continent as well. However, Hall settled in Stratford only in 1600 and married Shakespeare’s daughter, Susanna, in 1608. By then, of course, Shakespeare had written most of his plays and made most of his medical observations and allusions: Hall, therefore, could not have been the chief source of his medical knowledge.

Even so, it is instructive to compare Shakespeare’s and Hall’s medical observations. For Shakespeare, I could choose from many cases, but one will suffice. Here is Falstaff’s death, as described by Mistress Quickly in Henry V:

’A made a finer end and went away an it had been any christom child; ’a parted even just between twelve and one, even at the turning o’ the tide: for after I saw him fumble with the sheets and play with flowers and smile upon his fingers’ ends, I knew there was but one way; for his nose was as sharp as a pen, and ’a babbled of green fields. “How now, Sir John!” quoth I; “What, man! Be o’ good cheer.” So ’a cried out “God, God, God!” three or four times. Now I, to comfort him, bid him ’a should not think of God; I hoped there was no need to trouble himself with any such thoughts yet. So ’a bade me lay more clothes on his feet: I put my hand into the bed and felt them, and they were as cold as any stone; then I felt to his knees, and they were as cold as any stone, and so upward and upward, and all was as cold as any stone.

One of the merits of this passage—and it is characteristic of Shakespeare that the merits of his writing should be so multiform, combining in equal measure truth, humanity, tolerance, wisdom, understanding, love, irony, and poetry—is its beautiful and accurate description of delirium. Here are some of the diagnostic criteria for delirium in the World Health Organization’s International Classification of Diseases:

(i) impairment of consciousness [with] reduced ability to direct, focus, sustain, and shift attention;
(ii) global disturbance of cognition [with] perceptual distortions, illusions and hallucinations, most often visual; impairment of abstract thinking and comprehension . . . typically with some degree of incoherence;
(iii) psychomotor disturbances [with] hypo- or hyperactivity and unpredictable shifts from one to the other;
(iv) emotional disturbances, e.g., depression, anxiety or fear, irritability, euphoria, apathy or . . . perplexity.

Mistress Quickly, then, was a fine observer. Furthermore, the “nose as sharp as a pen” is a most precise and correct observation of a man in his death throes.

Now let us turn to Dr. Hall, whose medical observations, compiled from his notes after his death, appeared as a book, Select Observations on English Bodies of Eminent Persons in Desperate Diseases, that went through three editions in the seventeenth century. It is to go from the sublime to what, from our current standpoint, appears to be the ridiculous. I take a case at random: all 82 in the book are of the same intellectual ilk.

Mr John Trap (Minister, for his piety and learning second to none) about the 33 year of his age, of a melancholy temper, and by much Study fell into Hypochondriac Melancholy, and pain of the Spleen, with some Scorbutic Symptoms, viz. Difficulty of breathing after gentle motion of the Body, beating of the Heart, with fainting at the rising of the Vapours, and became a little better when they were dispersed. He had a gentle Erratic fever, so that he was much amaciated; after he had done preaching on the Sabbath, he could scarce speak; his Urine changed often, his pulse was mutable and unequal, and he languished much. Some ordinary medicines were used, but not succeeding, he desired my help and counsel, which was readily performed by me in prescribing the following, by which he was restored from the very jaws of Death, both safely, quickly and pleasantly.

Among the prescriptions, not all of them pleasant, were: tartar vitriolatus (potassium sulphate) and mercurius dulcis (mercurous chloride), both given in boiled apple pap; cream of tartar; chalybeate wine; pectoral rolls (containing maiden hair and hyssop); sceletyrs syrup; raisins dried in the sun, boiled in sack to the consistency of a paste, passed through a strainer and mixed with conserve of rosemary flowers and bugloss; citron pills; cinnamon; saffron; antiscorbutic beer; solution of water snails; solution of frogs’ spawn; and emetic infusion.

Apparently Trap recovered, partly, no doubt, from fear of further treatment by Hall. The doctor had many worse things up his therapeutic sleeve, such as goose, peacock, pigeon, and hen dung; ox bile; spiders’ webs; and oil of scorpions.

The seemingly eclectic farrago of prescriptions found its basis, if somewhat distantly, in the Galenical theory of humors. There were four such humors, each partaking of one of the qualities of the four elements of Greek philosophy. Blood was airy, which is to say warm and moist; phlegm was watery, that is, cold and moist; yellow bile was fiery (hot and dry); and black bile was earthy (cold and dry). Every person had his distinct temperament, according to the predominance of the humors within him, whether sanguine, phlegmatic, choleric, or melancholic; illness was the upset of the balance between the humors. The purpose of medical treatment was to restore that balance, and medicines either promoted the deficient humor or tempered the excessive one. Oil of earthworms, for example, exerted a cooling and moisturizing effect, useful in treating those illnesses that excessive yellow bile had supposedly caused.

The Galenical theory was an article of uncritical faith for university-trained physicians. Training consisted of indoctrination, memorization, and regurgitation. No deviation was permissible, and even refinement or elaboration was hazardous. Outright challenge was professionally dangerous. The theory therefore took many centuries to overthrow; mastery of it, and the treatments it entailed, distinguished real physicians from mere empiricks and quacks. Hall saw his patients through Galenical eyes; he was the master of
an all-sufficient theory that made close observation of them redundant, indeed infra dignitatum. That is why it is almost impossible now to diagnose anything from his descriptions of his patients. He didn’t need to observe: he had his theory, and so he knew everything in advance.

His book, incidentally, records only his successes. They confirmed that his theory was right all along, otherwise—does it not follow?—they would not have been successes.

Shakespeare was, of course, conversant with Galen’s theory of humors. This no more means that he must have had a university training in medicine than that a modern man who has heard of the germ theory of disease must be a microbiologist. But Shakespeare was not in thrall to Galenism as was his son-in-law: in other words, it was precisely his lack of university training that permitted him to be so acute an observer. While he needed a sophisticated basic education to be Shakespeare, the author of the plays, a university training, at least with regard to medicine, would have diminished rather than enhanced his work. A contemporary medical man can learn something from Shakespeare; he can learn nothing from Hall.
As Orwell pointed out, it takes effort and determination to see what is in front of one’s face. Among the efforts required is the discarding of the lenses of excessive or bogus theorizing. When it comes to our attempts to understand the phenomena of our own society, I cannot help but wonder how many of us are in the grip of theories that are the equivalent of Hall’s Galenical theory, and whether as a result we do not prescribe the legislative equivalents of human skull, mummy dust, and jaw of pike.

As to why people adopt theories that conflict with the most minimal honest reflection, I will quote T. S. Eliot, who, while not always right, was right about this:

Half the harm that is done in the world is due to people who want to feel important. They don’t want to do harm—but the harm does not interest them . . . or they do not see it . . . because they are absorbed in the endless struggle to think well of themselves.

Eliot might have added: the endless struggle to look well in the eyes of their fellow intellectuals and the fear of losing caste. But as a result of their efforts, as Orwell also famously said, “We have sunk to a depth in which re-statement of the obvious is the first duty of intelligent men.” 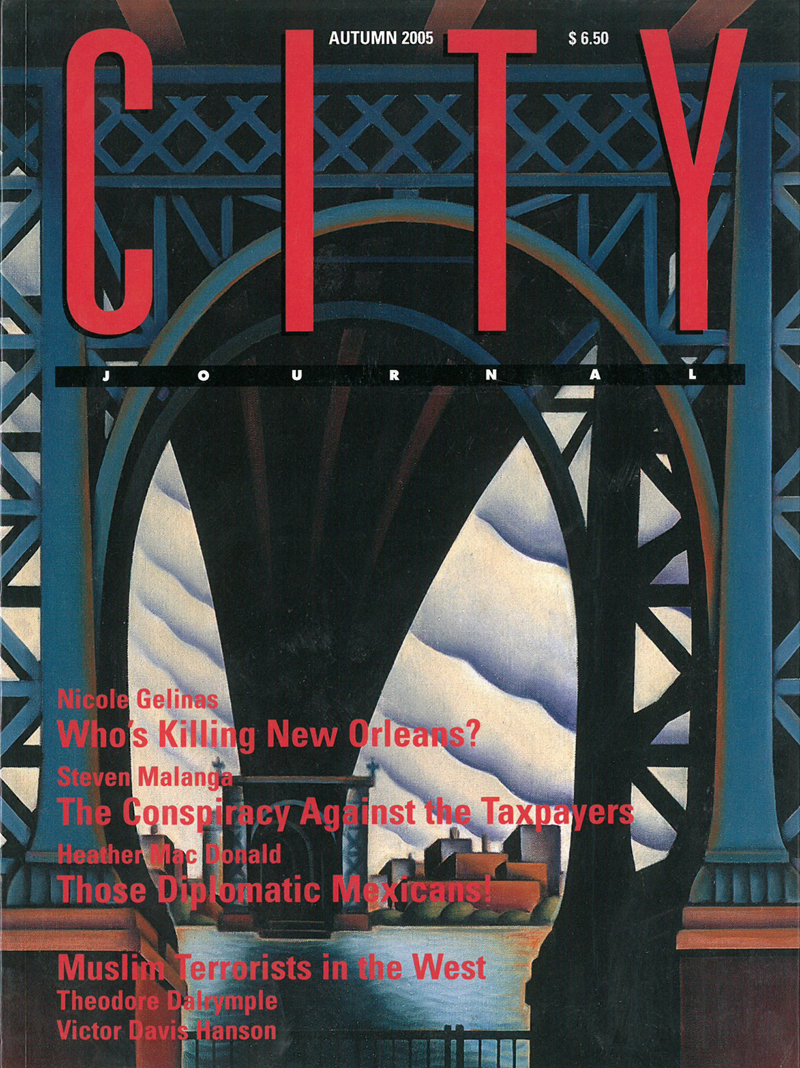