Tomb With a View

Maggie Gallagher is a senior fellow at the Center for Social Thought.

Nestled in what was once rolling farmland, in among Park Slope, Sunset Park, and Kensington, lies one of the buried treasures of Brooklyn, a monument to the city’s industry, intellect, and enduring desire: Green-Wood Cemetery.

In the 1840s, when Green-Wood Cemetery was born, Brooklyn was but a village surrounded by acres of farmland. Today, outside the Victorian ironwork fencing, the city’s never-ending struggle between urban bustle and urban decay presses up against the very gates. But step inside the 474-acre estate, and you enter a very different world, of peacefully rolling hills and uneasily roiling ambition suspended, in an artificially eternal peace, by death.

The New Yorkers enshrined here include famous artists and artisans (among them George Bellows, William Merritt Chase, both Currier and Ives, Duncan Phyfe, several generations of Steinways, and Louis Comfort Tiffany), captains of industry (such as Charles Pfizer of pharmaceutical, and William Colgate of toothpaste fame), founders of three New York newspapers (including Horace “Go West Young Man” Greeley and Henry J. Raymond of the New York Times), and statesmen and scoundrels from Boss Tweed to Henry Ward Beecher, not to mention historical curiosities, such as George Washington’s dentist and Whistler’s father.

Among the fallen luminaries is Major David Bates Douglass, one of the founders of Green-Wood, who had high hopes for a multipurpose cemetery. An engineer, he reshaped its hills into more picturesque forms, schemed to place an astronomy lab which, alas, never materialized, at the cemetery’s highest point, and vetoed the name “Necropolis,” opting for the more pastoral “Green-Wood” in its place.

At 474 acres, Green-Wood was huge for a people used to burying their dead in the small, crowded churchyards that New York City banned in 1837 for public health reasons. Drawn by its leafy promise of peace, New Yorkers spent Sundays frolicking there, enjoying a respite from crowded city tenements; in fact, its green pastures and sculpted lakes served as an inspiration for Central Park.

But business of a more permanent kind was at first harder to find. Henry Pierrepont, who laid out Brooklyn’s streets, together with engineer David Bates Douglass took on the task of stirring up interest in the novel idea of having one’s final resting place be so far from the maddening crowd. To stimulate business, they offered free burial plots to “interesting” corpses, such as Do-Hum Mee, a visiting Indian princess. It wasn’t until 1844 when DeWitt Clinton, “the Father of the Erie Canal,” was brought down from his grave in Albany to be laid to rest anew in Green-Wood under a lifesize marble statue of himself clad in a toga, that the cemetery’s reputation as a fashionable burial ground was finally clinched.

By 1866, Green-Wood’s popularity had reached such a pinnacle that Henry J. Raymond could write that “Greenwood [sic] is as permanently associated with the fame of our city as the Fifth Avenue or the Central Park. . . . It is the ambition of the New Yorker to live upon the Fifth Avenue, to take his airings in the Park, and to sleep with his fathers in Greenwood.”

Since then, Green-Wood may have fallen somewhat in fame, but not yet in beauty. Its ornate Gothic brownstone entrance gates, whose earthen towers soar 106 feet into the sky, were designed in 1861 by Richard Upjohn (who also designed Wall Street’s Trinity Church). A weeping Willow, that favorite Victorian symbol of mourning, stands nearby, its arms eerily bereft of leaves.

Across the opening lawn, the newly dead lie in neat, modest rows. Here, in the polished stones embedded in emerald turf, lies New York’s gorgeous mosaic of yesteryear: Criscuolo and Concetta, Kortez and Kraus; Hakon Syre buried next to “beloved brother” Thorleif, Edward and Christina, married 1929, “Together Forever,” but not yet.

Cross into the older sections and you enter a different world, filled with a previous century’s pretensions: tombstones give way to solid, substantial homes for the dead with an air of permanency, remnants of a time when the living were nearby and kept watch on the family dead.

The monuments in Green-Wood are so large and impressive because, for the Victorians, the cemetery was a living theater of grief, where the living came to contemplate not only the past, but the future. The Victorians not only romanticized grief, they aestheticized it—made it an object of contemplation and extracted from it an exquisitely painful beauty.

How does one meet death? Frederick Siefke, born in Vorbruch, Hanover, Germany in 1818, meets it with a 15-foot monogrammed tower crowned like an angel on a Christmas tree by a lifesized girl, long ringlets flowing down her back, one arm draped against an anchor, the outstretched fingers of her other arm pointing optimistically upwards. John Matthews, the soda fountain king, is buried like an ancient warrior in a Gothic tomb, replete with friezes to detail his life and gargoyles to ward off evil spirits.

Some did not wait for death. William Niblo, who died in 1878, specialized during his long lifetime in staging theatrical extravaganzas. He was also fond of hosting more intimate dramas replete with food and wine, in which invited guests would luxuriate on the lawns before his own as-yet-unoccupied tomb. Similarly, John Correja, a sea captain, commissioned a white marble statue of himself in full-dress uniform, shooting the sun with his sextant, and then often brought his friends with him to admire his chiseled features and contemplate his impending doom.

Wandering Green-Wood’s verdant hills, one is struck by the sad realization that even the dead are subject to the tyranny of fashion: Here a corner of the hillside is covered with identical miniature Washington Monuments, or pedestals topped with gracefully draped urns; there an eruption of angels breaks out, angels shaped to the Victorians’ odd liking—young, feminine, and unbearably sad, with cascading curls and faraway looks in their eyes.

Purity in the pre-Victorian age meant pure mind, pure reason, the rational will freed from the corrupting effects of emotions of the heart and passions of the body. For more than a thousand years, angels, who are pure spirit, were portrayed as stern, beautiful men in the classical tradition: reason made visible, the mind taking wing.

And then, here and there, are the anomalies, the other angels, far from girlish, breathtaking and disturbing in their tumultuous beauty, so enticing one could hardly have imagined encountering such temptresses in a cemetery: a pre-Freudian commingling of Eros and Thanatos, slinky sirens of death.

After the angels, it is the Victorians’ mausoleums that impress. They are decorated with stained glass and imposing bronze doors, including a set designed for the Gardner family by Augustus Saint Gaudens on a tomb laid out by the notorious architect Stanford White. The dead are neatly arranged in airtight bunkbeds, like the sleeping cars of old-time trains. Rounding a corner of a hillside, one suddenly meets a crowded subdivision of gray granite tombs, funereal row-houses blossoming under a bower of cherry trees. Looking down commandingly over the modest Sunset Park neighborhood toward the bay, they offer their owners, still hungry for status long after all other hungers are laid to rest, that rarest of New York real estate: a tomb with a view.

The Van Nuss-Parsons family erected the only Egypto-Christian crypt in the lot. On one side, an impressive big-breasted sphinx gazes impassively at an even bigger eccentric pyramid. On the other side stand an equally impressive Madonna and child. The baby, looking to nurse, also seeks his mother’s eyes, while she, distracted by death, stares at the dark mysteries there entombed.

There is still a peekaboo view of the harbor, a glimpse of church steeple, but for the most part this cemetery, which was originally inspired by the rural cemetery movement, has, over the years, involuntarily become part of an urban landscape. The forsythia and cherry blossoms almost, but not quite, obscure the industrial power plant set smack next door.

The age of the Renaissance man, so marked a feature of American life when Green-Wood was launched, has (perhaps) drawn to a close. Such men as DeWitt Clinton, champion of the Erie Canal, president of the American Academy of Art, and discoverer of a new species of fish and a native American wheat to boot are rarities in any age. But the grand and gracious vision of New York these men inaugurated remains a presence within the walls of Green-Wood, a tribute to the dead and a tocsin to the living, a clear and convincing testimony to what is possible to men who dare first to dream, and then to build. 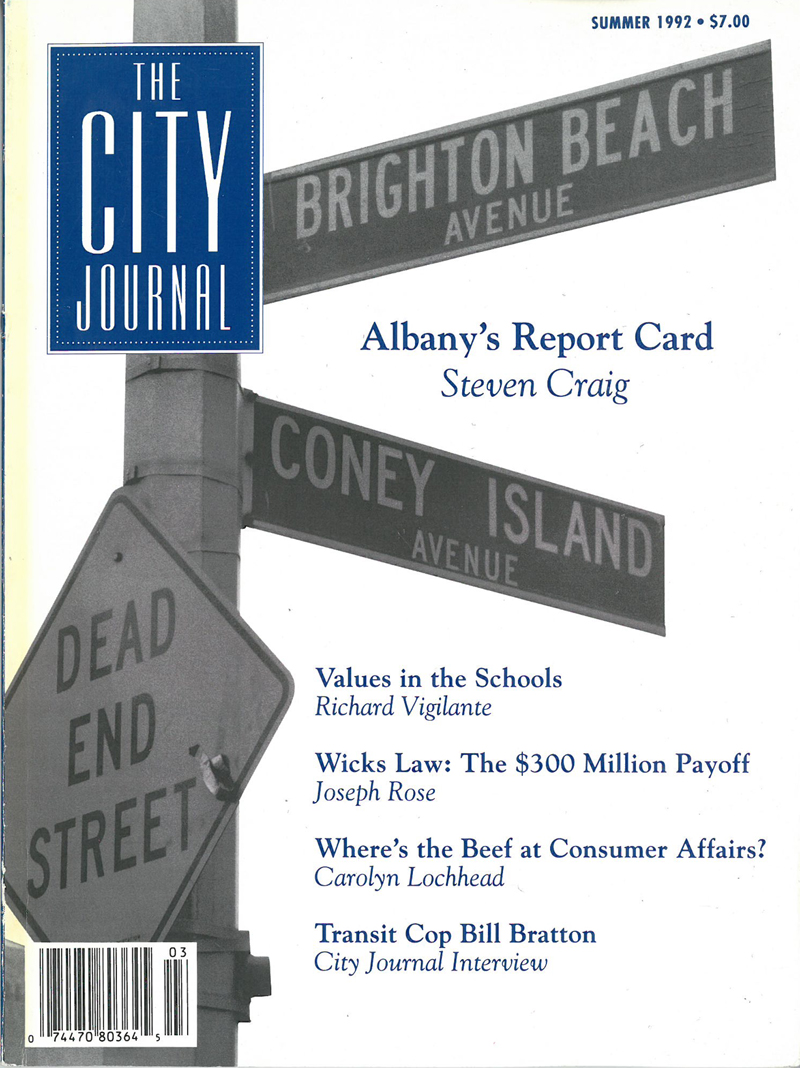 Why Marriage Is Good For You

Maggie Gallagher The data are clear: you’ll live longer, stay saner, get richer, and be happier.
from the magazine

Maggie Gallagher
from the magazine