Time for the Truth About Black Crime Rates

Mayor Mike Bloomberg has the chance to transform not just New York, but all American cities, by breaking the taboo on talking about the connection between race and crime. Doing so would take courage that no politician has yet mustered. But after the manslaughter and assault indictments of three New York police officers for fatally shooting Sean Bell last November, Bloomberg has an opening: acknowledge that police officers may react too precipitously to perceived threats in charged urban settings, in exchange for a wide-open discussion about the sky-high black crime rates that encourage that reaction. Crime, not police racism, drives negative police-community relations in black neighborhoods. And until the crime rate comes down, tragedies like the Sean Bell shooting may reoccur.

After the Bell shooting, which occurred outside a Queens strip joint, critics of the NYPD followed the usual script: increasingly ugly charges of police bigotry (despite the fact that several of the officers involved were black); deployment of the threat-of-black-riots weapon; calls for convictions of the officers on the most severe murder charges; and the transformation of the highly aberrant Bell shooting into the very symbol of the NYPD. To his discredit, Mayor Bloomberg joined the rush to prejudge the officers. The day after the shooting, he declared: “It sounds to me like excessive force was used.” Even more irresponsibly, he deemed the incident “inexplicable,” thus fueling the belief that the officers could not possibly have perceived a deadly threat and all but guaranteeing that any acquittal of them would be viewed as proof that the criminal-justice system was antiblack.

Carefully omitted from the swirl of media coverage and the denunciations of the NYPD was any discussion of black crime rates. The New York Times did its usual best to shroud the issue. A March article, for instance, devoted itself to charges that the police were preying on the black community. After noting that more than half the people whom cops stop and frisk are black, Times reporter Diane Cardwell added: “City officials maintained that those stopped and searched roughly parallel the race of people mentioned in reports from crime victims.” No, actually, there is no “rough parallel” between the proportion of stops and the proportion of alleged assailants: blacks aren’t stopped enough, considering the rate at which they commit crimes. Though blacks, 24 percent of New York City’s population, committed 68.5 percent of all murders, rapes, robberies, and assaults in the city last year, according to victims and witnesses, they were only 55 percent of all stop-and-frisks. Of course, the Times didn’t give the actual crime figures. Even a spate of vicious assaults on police officers in the week before the indictments didn’t change the predominant story line that officers were trigger-happy racists.

But the context of the Bell shooting suggests a different picture. The undercover officers and detectives involved had been deployed to Club Kahlua in Jamaica, Queens, because of the club’s history of lawlessness. Club patrons and neighbors had made dozens of calls to the NYPD, reporting guns, drug sales, and prostitution, and the police had recently made eight arrests there.

The night of November 24, undercover officer Gescard Isnora, who fired the first shots at Bell, had observed a man put a stripper’s hand on his belt to reassure her that he had a gun and would protect her from an aggressive customer. Outside the club, Isnora (who is African-American) and his colleagues witnessed a heated exchange between Bell’s entourage and an apparent pimp over the services of a prostitute, during which the pimp kept his hand inside his jacket, as if holding a gun. After the hooker refused to have sex with more than two of the group’s eight members, Bell—presumably referring to the pimp—said, “Let’s fuck him up,” and Bell’s companion, Joseph Guzman, said, “Yo, get my gun, get my gun.” Isnora reported these exchanges over his cell phone to his colleagues in the area.

Feeling the danger level mounting, Isnora
retrieved his gun from his unmarked car. When he returned to the scene, Bell and his two
companions had gotten into their car, ready to drive away. Isnora thought that a drive-by shooting of the pimp could be imminent, and so moved to question the car’s occupants. He held out his badge (by his account), identified himself as a police officer, and told the car to stop. Instead, Bell drove forward and hit Isnora and a police minivan, backed up, and then slammed into the minivan again, nearly hitting Isnora a second time.

Isnora, who was standing on the passenger side of Bell’s car, claims that he saw Guzman reach for his waistband. Believing that he faced a deadly threat, Isnora opened fire. The four other undercovers and detectives at the scene also started shooting, killing Bell and wounding Guzman and Bell’s other companion in the car, Trent Benefield. No gun turned up in Bell’s car. (Benefield alleges that Isnora began shooting before the car started moving, which is absurd. The barrage of 50 bullets was so fast that no witness at the scene remembers hearing more than eight rounds fired off. Bell was undoubtedly killed as soon as the shooting started, and so wouldn’t have been able to move the car forward and back and forward again, as he did. None of the officers had ever used their guns before, moreover, despite making hundreds of arrests, including for gun possession. These were not trigger-happy cops.)

Without question, the results of this episode are horrific. And the tactics stank—Isnora should never have left himself as exposed as he was. But was the officers’ perception of a deadly threat so unreasonable as to make their shooting a criminal homicide? If a judge or jury finds that they did not reasonably believe that they faced an imminent use of deadly force, then, according to the woefully inappropriate criminal code, their actions fall within the literal definition of manslaughter. (Showing what appears to be arbitrariness, the grand jury indicted two of the officers for manslaughter and assault—even though one of them, Isnora, did not even hit Bell—and a third for reckless endangerment, but didn’t indict the remaining two officers, even though all had fired their guns.)

Isnora and his colleagues knew the following, when they saw a car racing toward them whose occupants they believed could have guns: shootings at after-hours joints like Club Kahlua are by no means uncommon. Just the previous month, a patron had been fatally gunned down outside another Queens club, the third lethal shooting there in three years. This March, a club customer in Brooklyn tried to blast an off-duty cop’s head off after the two had unintentionally bumped into each other on a crowded dance floor.

Isnora and his colleagues did not know the following, but it’s a further indication of the reality of crime in New York: Bell, Benefield, and Guzman had all been arrested for gun possession in the past, according to the New York Times. Further, Guzman had a long prison record, including a sentence for an armed robbery during which he shot at his victim. And Bell and his entourage were dealing drugs, an activity highly correlated with violence.

These specific facts about the Bell shooting are just a few of the hundreds of thousands of data points that reveal a hard truth: any given violent crime in New York is 13 times more likely to have a black than a white perpetrator. While most black residents are law-abiding and desperately deserve police protection, the incidence of criminal activity among young black males is off the charts. “A black kid between the ages of 18 and 24 is the scariest thing to cops,” says a police attorney, “because they know how crazy it can get.” And this is true whatever the officer’s race.

The “public doesn’t get how frightened cops are,” says a former NYPD commanding officer. “Cops are reluctant to articulate everything that goes into a shooting incident,” says another former officer, retired assistant chief Jim McShane. “They’re afraid to say: ‘Are you kidding me? I was terrified. The guy was drinking; I told him to stop; I was afraid that someone was going to get shot.’ ” When an officer thinks that he is under deadly threat, he knows that any hesitation could cost him his life. NYPD officer Steven McDonald was staring down the barrel of a small gun in Central Park in the summer of 1986, held by a 15-year-old whom he had stopped to question about a stolen bicycle. Rather than immediately responding with deadly force, he paused—and was shot twice in the head and once in the arm, paralyzing him from the neck down.

Because of these realities, it’s possible that officers are quicker to perceive—and react to—a deadly threat when dealing with young black men than they would be with other demographic groups. (Even so, fatal shootings by the NYPD
are extremely rare; fatal shootings of unarmed civilians, even rarer.) And it’s undeniably true that the much greater incidence of crime in black neighborhoods means that the police activity there will be higher, leading to a greater risk of the use of force.

The NYPD’s goal at this point—understandably and rightly—is to do everything it can to
prevent the death of another Sean Bell. The department’s recently announced tactical review is more than justified. But the police can only go so far in ensuring that tragic errors, when they inevitably happen, do not happen to black males. Mayor Bloomberg has already pandered enough to antipolice activists. He should now cash in his political chips and speak the truth: the black crime rate is the most important determinant of how the police interact with the black community. Unless black leaders—real or media-created—muster the will to address the crime epidemic among black youth (most of it inflicted on other blacks), the
ongoing carnage will almost inevitably include an infinitesimal number of accidental police shootings of unarmed men. Criminal activity among young African-Americans is the poison of cities and of race relations; if Bloomberg can force a conversation about it, he could help reclaim urban America. 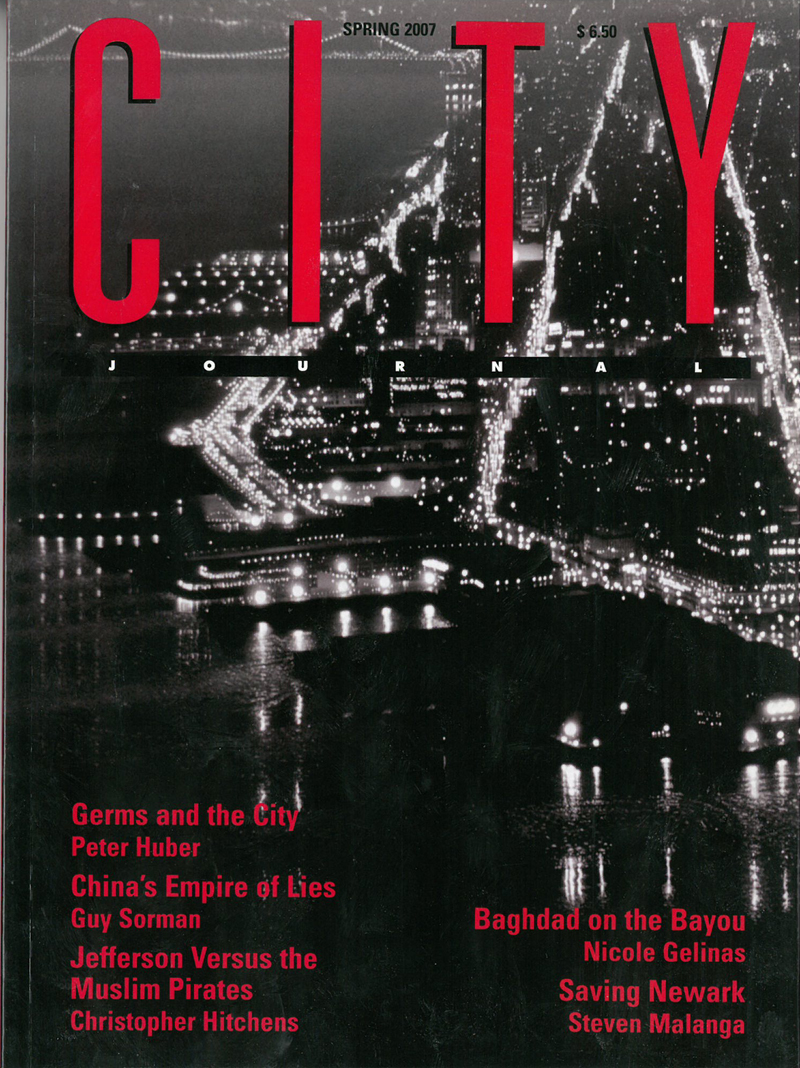