I am Zlatan: My Story On and Off the Field, by Zlatan Ibrahimović, as told to David Lagercrantz (Random House, 400 pp., $16)

“A World Cup without me is nothing to watch,” said internationally renowned striker Zlatan Ibrahimović, after his Swedish team failed to qualify for soccer’s greatest quadrennial tournament. Seeing as this has been the most intense World Cup in recent memory—complete with upsets, clutch goals, and chomp-happy Uruguayans—such a statement may seem curious to America’s growing legion of soccer fans, who are producing such boffo ratings and momentum for ESPN that only Keith Olbermann could possibly dampen things: “You, sir, Mr. Suarez, sir, are, sir, [dramatic head turn] a disgrace, sir. [Dramatic pause] Good night and good luck. [Dramatic downward glance] Sir.” 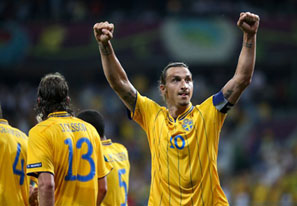 Who is “Ibra,” as he is affectionately known? For some, a striker of acrobatic feats (and feet) whose six-foot-five-inch frame is dwarfed only by his ego and ever-running mouth, which has a penchant for speaking in the third person (e.g., “Zlatan doesn’t do auditions.”) What’s more, his autobiography, I Am Zlatan, has finally landed on American shores after a three-year wait.

Ibra’s story is no mere “footballer’s book”—indeed, it was shortlisted for a slew of literary prizes across Europe. In the words of the U.K. Independent’s Ian Herbert, I Am Zlatan is a “supreme beauty as an immigrant’s tale . . . rarely heard beyond the realms of fiction,” right up there with Zadie Smith’s White Teeth and Philip Roth’s Portnoy’s Complaint in the pantheon of Important Immigrant Narratives.

Ibrahimović was born in 1981 in Malmö, Sweden to a Croatian mother and Bosnian father. Weaned in that city’s notorious Rosengård ghetto, he bounced between his overwhelmed mother and alcoholic father after their early divorce. A “snot-nosed” kid and serial bike thief, Ibra’s hours spent honing ball skills on his housing project’s dismal playground led him to Malmö FF’s “farm team” (to put it in American terms) by age 14; by 18, he was on the roster of Malmö FF’s first squad.

It’s these early years in Rosengård that fascinate the Euro haut monde, and rightly so. Rosengård made international headlines in 2008 and 2010 when young, mostly Muslim immigrants rioted with car fires, rock-throwing, and small homemade explosives. The rioting got so bad that, as the New York Times reported, “fire and ambulance brigades would not even enter Rosengård without a police escort.” (Ibra is not a Muslim, and his book is nearly devoid of religion, save for a few references to his Buddhist tattoos.)

To read some breathless reviewers tell it, Ibrahimović’s book finally lifts the veil on a little-understood racial and cultural dynamic in modern Europe. Take Simon Kruper’s too-smart-by-half comparison of Zlatan with Portnoy. His cherry-picked quotes make for a clever Venn diagram, but the exercise belies the lack of depth Ibra provides on his immigrant upbringing. Ibra discusses his childhood in only two of the book’s 28 chapters (he makes no mention of the Rosengård riots), and his reflections consist of peppered bon mots and spastic memories; Frank McCourt-style epexegeses on his family’s hardships are virtually nonexistent. Consider Ibra’s take on the horrid Balkan War, which added greatly to his family’s dysfunction: “It was Grandma who had died in a bombing raid in Croatia, and they were all in mourning—everybody but me, who wasn’t allowed to know and would never care whether people were Serbs or Bosnians or whatever.” Or another Zlatan gem: “I don’t give a damn about all that ethnicity crap.”

So mom was in mourning, dad drank his troubles away . . . and that’s nearly all the author has to tell us. This is not to say that Ibrahimović is mute regarding his outsider status in Sweden. But Kuper’s claims—“both books [Zlatan and Portnoy], in large part, are odes to the native blonde girl . . . [both men] yearn with wonder for that incomprehensible being . . . who, miraculously, feels at home in the place where she lives. To attain her would be to conquer this alien society”—are dubious, at best. What accounts for Ibra’s initial attraction to his native, blonde partner, Helena Seger? The angry way she exited a taxi; her “wicked attitude”; the fact that “she was cool” and “liked cars.” Yes, their backgrounds couldn’t be more different (and Ibra offers some charming anecdotes on this matter), but nowhere in Zlatan do you get the sense that his ultimate prize is to bag ABBA’s Agnetha and Anni-Frid, or the chicks from Ace of Base. His goal is, rather, to be the best fotbollsspelare in the world.

And it is in the retelling of this quest that Zlatan really shines. Now, you won’t confuse it with Grant’s Memoirs anytime soon—“wicked” and “awesome” are favorite adjectives—but Zlatan is a damn good soccer book. Aficionados will appreciate the insider’s story: how famed Italian Fabio Capello turned him from the immature wannabe-(Brazilian) Ronaldo to the workhorse warrior he is today (“Nobody’s going to thank you for your artistry if your team loses”); why Chelsea manager José Mourinho is, indeed, “the special one”; and Ibra’s disastrous non-relationship with coach Pep Guardiola during a brief stint at Barçelona.

Ibra’s voice is refreshingly blunt and humorous—qualities sorely needed in a sport derided as “boring” here in the states and dripping with bland, PR-approved player statements across the pond. Not only does he make his exploits on the pitch come to life, he tackles the trials and tribulations of a footballer’s career with aplomb: the shady managers and owners, the importance of agents who can wheel and deal, the life-or-death fandom of Europe’s hooligans, the press’s doggedness to turn molehills into mountains. The author has a way of getting you to nod your head with his Zlatanisms: Yeah, what’s so wrong with tossing illegal fireworks into a hot dog stand? Let a guy have his fun! And what’s a black eye and broken ribs between teammates? Dude was asking for it!

But back to the first-generation immigrant of Malmö, and the questions of Swedish identity and assimilation. The book is chock-full of references to Ibra’s outsider status among the natives, but he frames the identity question mainly in terms of neighborhood and individuality, not race, ethnicity, or religion: “I was from Rosengård. I didn’t give a damn about the Swedes [as a kid]”; “It was your project that counted, not the country your parents had come from”; “You can take a guy out of Rosengård, but you can never take Rosengård out of the guy.”

So what is it about Sweden that is so foreign to Rosengård’s favorite son? Perhaps the most Swedish thing of all: the concept of lagom. Lagom is an untranslatable Swedish word, but I’ll give it a crack: it’s sort of a “Goldilocks” view of life—not too much, not too little. It connotes, not necessarily the pursuit of the ordinary, but rather that there’s nothing inherently ignoble about being ordinary; in fact, it may be preferred. Why take the fancy-pants Ferrari to work when the tunnelbana will suffice? Thus, the great irony of Zlatan: Ibra has become a national hero (complete with his own stamp) precisely because he paid no heed to the national ethos: “I mean, what happened to the guys in the Malmö FF youth squad who always behaved? Are there any books written about their lives?” The fascination with domination was with him even as boy: “The players on the Swedish national side—who were they? There was no superstar, nobody who was talked about around the world.” Indeed, Zlatan evokes that line from Pixar’s The Incredibles about the detrimental drudgery of sameness. “I hate it,” Ibrahimović writes, “when people who stand out get put down. If I hadn’t been different, I wouldn’t be sitting here now.”

And for someone who’s often derided as an egomaniac, Zlatan leaves it to the reader to determine what “sitting here now” actually means: 11 league titles with six different clubs in four different countries (and, arguably, four of those clubs can thank Ibra for bringing them back from the dead). A career transfer-fee record (approximately $233 million). Top-scorer awards. Buckets of individual awards. And oh, yes, that goal against England. In other words, pure, rarefied air.

This year’s World Cup has already been memorable, and yet it’s sorely missing that “Ibracadabra” dazzle. For fans who couldn’t make the trip to Brazil, consider I Am Zlatan your stand-in caipirinha: after all, it’s enjoyable, packs a punch, and goes great with the beautiful game.

Katherine Ernst Once a joyous memory-maker, fireworks in New York are now just another symptom of civic decline.
eye on the news

Katherine Ernst Why Bernie Sanders and Millennials are a match made in ignorant heaven.
books and culture

Katherine Ernst Once again, Ayaan Hirsi Ali’s pen is mightier than any barbarian’s sword.
More on