Should Staten Island Leave the City?

Staten Island is the city’s smallest borough, but its population of 380,000 makes it as big as Miami or Pittsburgh. Now, there is a serious possibility that Staten Island will secede and form a city of its own. It would be the second-largest city in New York State.

Eighty-three percent of the borough’s voters approved a 1990 referendum, authorized by the State Legislature, that created a bipartisan commission to study secession. The commission will also draft a proposed city charter to be put before the voters of Staten Island in November 1993. If they approve it, the issue will go back to Albany for final approval by the Legislature and the Governor.

In many ways, Staten Island is unlike the rest of New York City. It is 85 percent white, mostly middle-class and suburban. The Republican Party has a strong presence on the island, though its residents also produce large majorities for Mario Cuomo. It is the only borough in the city to support a major daily newspaper, the Staten Island Advance, a Newhouse publication that outsells all city newspapers combined on the island. Staten Island’s transportation infrastructure further distances it from the other boroughs: Its only connections are the Verrazano-Narrows Bridge to Brooklyn and the ferry to Manhattan. In contrast, three bridges connect the island with New Jersey.

The idea of secession has drawn vehement opposition from city political leaders. Indeed, many Albany insiders speculated that the bill authorizing the secession referendum passed the Assembly only because most city Democrats were counting on a veto by Governor Cuomo. When Cuomo signed the bill in 1989, outgoing Mayor Ed Koch accused him of “plunging a dagger into the city’s heart.”

Upon taking office, Mayor Dinkins instructed his corporation counsel to mount a legal challenge to stop the original referendum, arguing that by limiting it to Staten Islanders, the state had denied equal protection to other New York City residents on an important citywide issue. The city also claimed that by giving ultimate authority to the State Legislature, the law violated the home-rule provision of the state constitution. The state’s highest court rejected Dinkins’s petition. The Mayor responded by appointing his own Task Force on Secession, headed by Marcia Smith, a former assistant to Deputy Mayor Bill Lynch, to study the impact of secession on both Staten Island and the city and to represent the Mayor’s view on the issue.

Secession supporters accuse the Mayor’s task force of bias; opponents make the same claim about the state commission, which is dominated by Staten Islanders. One hopes that despite the passion on both sides, it will be possible to address the question in a reasonable and intelligent way.

Toward this end, the state commission has appointed a number of experts to explore the economic consequences of secession. The Center for Management of New York University’s Robert F. Wagner Graduate School of Public Service has general responsibility for the commission’s research. A team of NYU economists, including Robert Berne, Dick Netzer, and Leanna Stiefel, has investigated the present cost of municipal services on the island, which will be used to develop forecasts of its economic viability. Hugh O’Neill, formerly of the Port Authority, has studied the present and future economy of the island. The law firm of Orrick, Herrington & Sutcliffe is examining the apportionment of assets and liabilities between Staten Island and the remainder of the city, and the firm of Kaye, Scholer, Fierman, Hays & Handler is preparing a memorandum on the continuing legal obligations of a separate Staten Island. CUNY political scientist Douglas Muzzio conducted a poll to gauge Staten Islanders’ attitudes toward secession, and Richard Briffault of Columbia Law School will advise the commission on drafting the charter.

The Staten Island secession movement is nothing new: Talk of divorce has been heard across the Narrows ever since the island joined the city in 1898. At that time, however, most Staten Islanders were happy to become New Yorkers. Indeed, when the creation of Greater New York was approved in an 1894 referendum, the largest margin of victory came in Staten Island.

As in most separations, a dramatic incident was needed to stimulate action. The first occurred in 1947, when New York City decided that Fresh Kills would become a major garbage dump. The two-thousand-acre landfill has remained a sensitive issue among Staten Islanders, an ominous symbol of how the city literally and figuratively dumps on its smallest borough. It is the largest open landfill on the planet and the last remaining in New York City. Ten thousand tons of residential garbage are dumped there each day. The mountain of waste reaches 140 feet into the sky and is growing higher. In the state commission’s recent poll, Staten Islanders cited Fresh Kills as the most important problem facing the island.

The issue of secession was enlivened again with the passage of the new City Charter, which abolished the Board of Estimate, the body that allowed Staten Island the most effective voice it ever had in the governance of the city. The U.S. Supreme Court had ruled that giving boroughs of disparate size equal representation on the board violated the one person, one vote standard. The present charter leaves the representation of Staten Islanders in the hands of three city councilmen in a 51-member legislature. It is understandable why 84 percent of Staten Islanders in the commission’s poll said their interests are inadequately represented in the new charter. This is a classic case of a minority demanding that its rights be recognized within a majoritarian system.

But the opposition’s case is equally reasonable. Staten Island is served by New York’s water system and by ferries owned and operated by the City of New York. It provides what the city sorely lacks elsewhere—unencumbered land and a suburban living environment for those who might otherwise move out of the city altogether.

Opponents of separation also contend that New York City cannot afford to lose a substantial part of its middle-class tax base. The average Staten Island household earns $43,862, compared with a citywide average of only $29,832. Only 7.8 percent of Staten Islanders live below the poverty line, compared with 19.3 percent in the entire city. Proponents complain that Staten Island residents carry an unfair share of the financial burden imposed by the costly government of New York City.

But the Staten Island tax base is not as large as is often assumed. Only 1.5 percent of New York City’s commercial taxes originate on Staten Island, according to the study conducted for the state commission by Berne, Netzer, and Stiefel. The NYU economists found that the cost of providing city services to Staten Island exceeds the revenues the borough generates by between $160 million and $180 million. This basic finding corroborates a study completed by the Mayor’s Office, which estimated the difference between expenses and revenues at $199 million. These analyses point to the surprising conclusion that separation of Staten Island from New York would actually provide budget relief for the city. From a strictly economic perspective, the other four boroughs would come out ahead. But, as with most easy solutions to complex problems, it tells only part of the story.

State policymakers will ask some probing questions about the ability of the island to plug the gap between its revenues and expenditures. So will Staten Islanders. In Albany, the concern will be with the prospect of creating a major municipality that might eventually have to fall back on the state if it runs into financial difficulties. Among local residents, the financial considerations are more immediate, for it is they who will pay to make up the difference.

Yet responses to the state commission’s poll suggest that self-determination matters enough to many Staten Islanders that they would be willing to pay a substantial price. Forty-nine percent of the respondents indicated that they would support a 25 percent increase in their property taxes in order to secede, 23 percent vowed to pay up to 50 percent more, and 13 percent were willing to double their property taxes as the price for independence. A 25 percent increase in property taxes on the island would generate $63.4 million in additional revenue. It remains an open question, of course, whether these commitments would hold up when the tax bills arrive.

Even without tax increases, it may be possible for an independent Staten Island to be economically viable. The city currently receives $658.1 million in revenues from the island. Add its share of state and federal aid ($283.5 million) and debt service reserve funds ($13.8 million), and Staten Island has an existing revenue base of $955 million—by most standards a strong financial foundation for a city of fewer than 400,000 people.

Moreover, the architects of a new city would have an unprecedented opportunity to shape a local government that reflects their best thinking and highest aspirations. A City of Staten Island could end up with a far leaner government than the City of New York. On the other hand, Staten Islanders are accustomed to a certain level of service they have historically received from New York City, and most residents probably will want to see this maintained. Some essential services now provided by the city would be costly for Staten Island to deliver itself. For example, there is no city jail in the borough. Independence would require that one be built. There is no primary-care city hospital. Should there be?

Most importantly, New York City is party to a host of collective bargaining agreements with its public employees, many of whom live and work on Staten Island. If these workers are not “kept whole” with regard to wages, pensions, and other benefits, their unions will pose a formidable, perhaps insurmountable, political obstacle to secession, even among Staten Islanders themselves. Twenty-six percent of the borough’s residents are government employees, and two-thirds of this percentage work for the city.

The state commission plans a study on how Staten Island would actually operate as an independent city. But even if the economics and politics of secession could be resolved, opponents argue that there are larger issues at stake. As New York and other cities face the twenty-first century, the idea of a suburb-like county wanting to leave does not play well among those who work so hard to make urban America succeed. And there is the ever-present racial dimension. Is secession a manifestation of white flight taken to the extreme? If Staten Islanders are a beleaguered minority within New York City, are blacks within a conservative, largely white borough in an analogous position? Concerned about these issues, the local chapter of the NAACP has initiated its own study of secession.

If state policymakers do eventually support secession, the process will take on all the manifestations of a divorce. Lawyers will sort out common assets and debts in order to determine what belongs to whom. Tough questions will be asked: What will be done about the Fresh Kills landfill—will New York be charged for using it, will its use be limited to refuse from Staten Island, or will it be closed entirely? Should the ferry be run by New York, Staten Island, the Port Authority, or a private business? Will Staten Island have to purchase its water from New York City? Who owns Borough Hall? These and numerous other terms would be negotiated in the separation settlement. As with most divorces, the final event would be preceded by disbelief, trauma, and familiar advice. 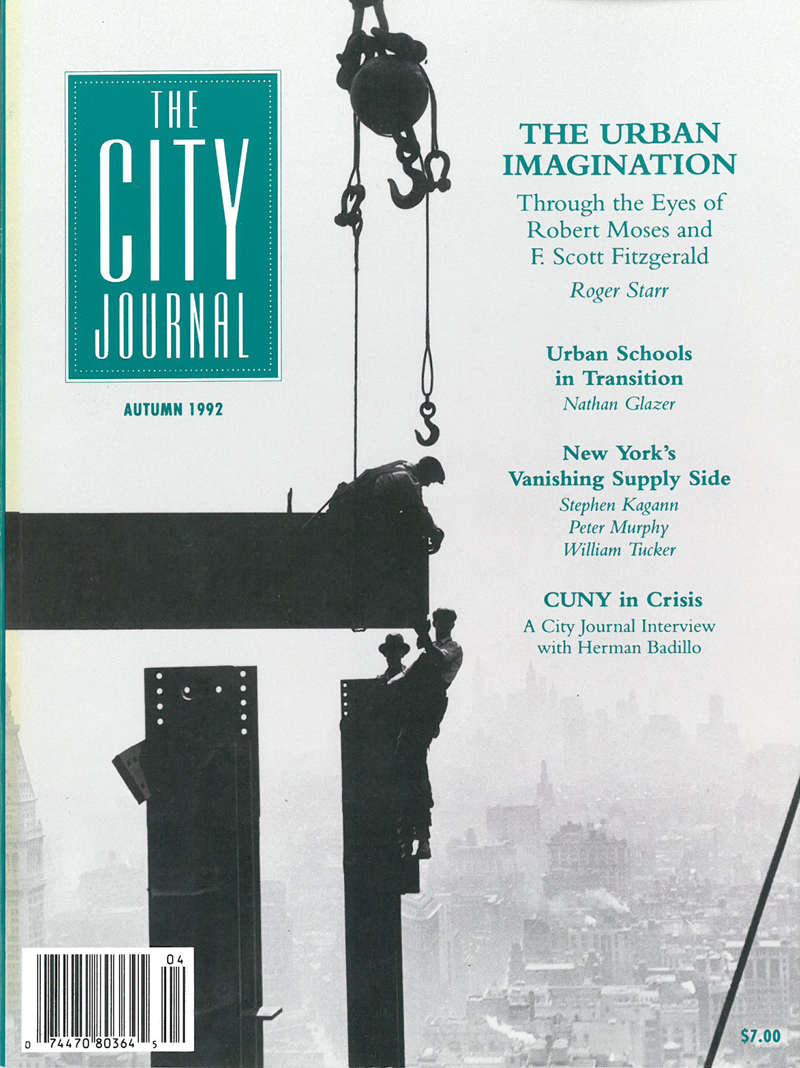 Back to the Boroughs: Reinventing New York's Governments