The Grasping Hand: Kelo v. City of New London and the Limits of Eminent Domain, by Ilya Somin (University of Chicago Press, 336 pp., $30)

Rare indeed is the constitutional law case that has something for almost everyone to loathe. Ten years ago, the Supreme Court sparked a moment of bipartisanship when it held in Kelo v. City of New London that states can take property from one owner and give it to another to redevelop into a higher, better (read: “more lucrative”) use. Conservative property-rights advocates, liberal civil rights groups, and almost everyone in between denounced the opinion, and states passed dozens of laws rejecting its central holding. Federal courts and legal writers are still working out the ramifications of the case.

The story of Kelo has been told before, most recently in journalist Jeff Benedict’s engrossing 2009 book, Little Pink House. But now Ilya Somin, a professor at George Mason University, prominent legal blogger at the Volokh Conspiracy, and nationally known expert on property rights, has written The Grasping Hand: Kelo v. City of New London and the Limits of Eminent Domain. Somin’s book will likely become the definitive legal analysis of Kelo, its aftermath, and future prospects. The author has built on earlier accounts and adds original interviews of his own, most importantly of insiders within the New London Development Corporation, the nonprofit chartered by the state of Connecticut to guide redevelopment of the city, which had fallen on hard economic times after manufacturing interests moved out.

In the late 1990s, Connecticut governor John Rowland appointed Claire Guadiani, president of Connecticut College, to head the NLDC. Guadiani was married to David Burnett, a high-ranking official at Pfizer, then the world’s largest pharmaceutical company, and she helped recruit other Pfizer executives to the NLDC board. The NLDC turned its sights to Fort Trumbull, a waterfront neighborhood near downtown that had long been home to a naval base. The base closed in 1998 and housing prices declined, though Fort Trumbull was not a “blighted” neighborhood in any traditional sense of the term. In 1997, Pfizer agreed to build a $300 million research facility on an old industrial site in Fort Trumbull, in exchange for an 80 percent, 10-year property-tax abatement. The company asked for an additional condition: the city had to condemn 90 acres of property surrounding the Pfizer site and transfer it to private developers to build a high-end housing development, hotel and conference center, and river-walk shopping district for the benefit of Pfizer employees who, presumably, would come to live near the facility.

Such “private-to-private” redevelopment condemnation proceedings are surprisingly customary. In common law, the state has the power of eminent domain to make improvements for “public use”; the Fifth Amendment guarantees property owners “just compensation” for such takings. In the 1800s, private companies enjoyed the power of eminent domain to take private property to build railroads, until abuses caused Congress to rein in the practice. But starting in the 1940s and 1950s, possessed by the New Deal fetish for central planning, cities began taking “blighted” properties and giving them to private entities, as a way of clearing out urban slums.

The Supreme Court blessed these “redevelopment condemnations” in a 1954 case, Berman v. Parker, in which scores of homes owned by African-American residents of D.C. were taken as part of a plan to redevelop a blighted section of the city. Noting that decrepit housing “suffocate[s] the spirit by reducing the people who live there to the status of cattle,” FDR appointee William O. Douglas wrote for a unanimous court that “[t]he concept of the public welfare is broad and inclusive,” permitting condemnation of non-blighted properties in order that the community as a whole could be “beautiful as well as healthy, spacious as well as clean, well balanced as well as carefully patrolled.” That the property was being handed to a private corporation didn’t matter, nor that intact homes were swept up with abandoned ones, since “experts concluded that, if the community were to be healthy, if it were not to revert again to a blighted or slum area, as though possessed of a congenital disease, the area must be planned as a whole.” Douglas thus degraded the constitutional concept of “public use”—which might have been expected to limit takings to instances where the government sought property to build a public conveyance or public space—into something closer to “public benefit.” As Somin notes, more than 1 million homes (disproportionately poor and minority ones) have been condemned and redeveloped since Berman, almost always with the courts’ blessing.

Kelo was a troubling extension of Berman. Fort Trumbull had seen better days, but it had a large number of property owners living in their own homes and an active civic life. It was no slum. But the city forthrightly argued that the developers would put the properties to a “better” use and generate more tax revenue. As Somin notes, the threat to middle-class property that lurked in Berman and other cases thus came to the fore in Kelo.

The Fort Trumbull plaintiffs found top-flight legal representation in the Institute for Justice, the libertarian public-interest law firm. Though they represented a group of nine Fort Trumbull residents (including one, Wilhemina Dery, who had been born in her home in 1918), the media-savvy IJ lawyers built their public-relations efforts around Susette Kelo, a feisty single mother of five who put herself through nursing school by working as an EMT. She loved Fort Trumbull for its water views and had carefully restored her 900-square-foot cottage, which came to be known as the “little pink house” for the shade of salmon she painted it.

The lawyers at IJ took the case to the Supreme Court, which sided with New London in a 5-4 decision that preserved courts’ traditional deference to redevelopment takings. While Fort Trumbull was not blighted, John Paul Stevens wrote for the majority, the city’s “determination that the area was sufficiently distressed to justify a program of economic rejuvenation is entitled to our deference. The City has carefully formulated an economic development plan that it believes will provide appreciable benefits to the community, including—but by no means limited to—new jobs and increased tax revenue . . . . [T]hat plan unquestionably serves a public purpose,” and thus was constitutional. In a surprising dissent, Sandra Day O’Connor—she had authored an opinion in the 1980s upholding Berman—blasted the majority, arguing that because it was always possible to claim that redevelopment would increase tax revenues, under Kelo “[n]othing is to prevent the State from replacing any Motel 6 with a Ritz-Carlton, any home with a shopping mall, or any farm with a factory.”

The ruling sparked furious reaction. Polls showed that as much as 80 percent of the public disagreed with Kelo, which “generated more public attention than all but a handful of other Supreme Court rulings.” Harnessing the outrage, the lawyers at IJ led a nationwide effort to enact state laws restricting redevelopment takings. Thirty-seven states did so, but Somin’s analysis finds that at least 22 of these laws “are largely symbolic in nature, providing little or no protection for property owners.” Perhaps the most important outcome of Kelo, thus, was opening the public’s eyes to the cozy relationship between developers, planners, and local government officials, and how broad their latitude was once they decided that someone else could make better use of your property. To the extent that the post-Kelo outcry made public officials wary of expansive use of eminent domain—and evidence suggests that it has, with fewer redevelopment takings in the past decade—the case has come to be seen as an important, though incomplete, victory for property-rights advocates.

Somin’s book is excellent at laying out the political and doctrinal developments that led up to Kelo; though his discussion of the history of takings cases will be of most interest to lawyers and scholars, the book is accessible to non-lawyers as well. Somin’s most useful section is a chapter on potential reforms to economic- redevelopment takings that could blunt some of the injustice they inflict on property owners. These include giving special protection to homes (as opposed to commercial or industrial properties), increasing homeowners’ compensation, and subjecting takings to heightened legal scrutiny under state law.

Perhaps the most important reform that states could adopt would be to require more rigor in the economic analyses used to justify large-scale redevelopment, since so many of these projects fail to generate the tax and other benefits proponents forecast. That includes the Fort Trumbull project, where Pfizer eventually pulled out; the bulldozed 90 acres now sit denuded of houses and are overrun by feral cats. Unfortunately, as Somin notes, it’s unlikely that redevelopment takings and the abuses therein will stop entirely unless the Supreme Court reverses Kelo.

Kelo has only one real set of supporters: legal academics, who defend its deference to planners and politicians and its watered-down redefinition of “public use.” The continued defense of Kelo by the professoriate—a group normally inclined to side against corporate interests and in favor of the underprivileged—suggests that the case had less to do with corporate greed than it did with social class. Somin is fair-minded about the NLDC’s motives and concludes that the group really was motivated by the public interest and was not, as critics charged, in the pocket of Pfizer. But even if one imagines that Guadiani was not swayed by her family’s connection to the pharma giant, it seems clear that she was moved by something more fundamental: the bias among upper middle-class elite professionals for a certain kind of neighborhood.

Guadiani disparaged the Fort Trumbull homes as “ugly and dumb”; her husband insisted that they had to go because “Pfizer wants a nice place to operate.”

Susette Kelo’s little pink house was tidy and well-maintained, working-class and modest; it had to make way for the kind of houses and neighborhood favored by degreed, “creative class” urban and inner-suburban professionals (among whose ranks number most college presidents, law professors, and federal judges): dense, walkable neighborhoods, close to high-end commercial outlets, with well-appointed homes on smaller lots, populated by people like them. Pfizer’s corporate money alone may not have been enough to force the residents of Fort Trumbull out of their homes. But yoked to upper-middle-class judgments about what kind of neighborhood is smart and beautiful as opposed to ugly and dumb, it was unstoppable.

Justin Torres is an attorney with the U.S. Department of Justice. The views expressed here are his own. 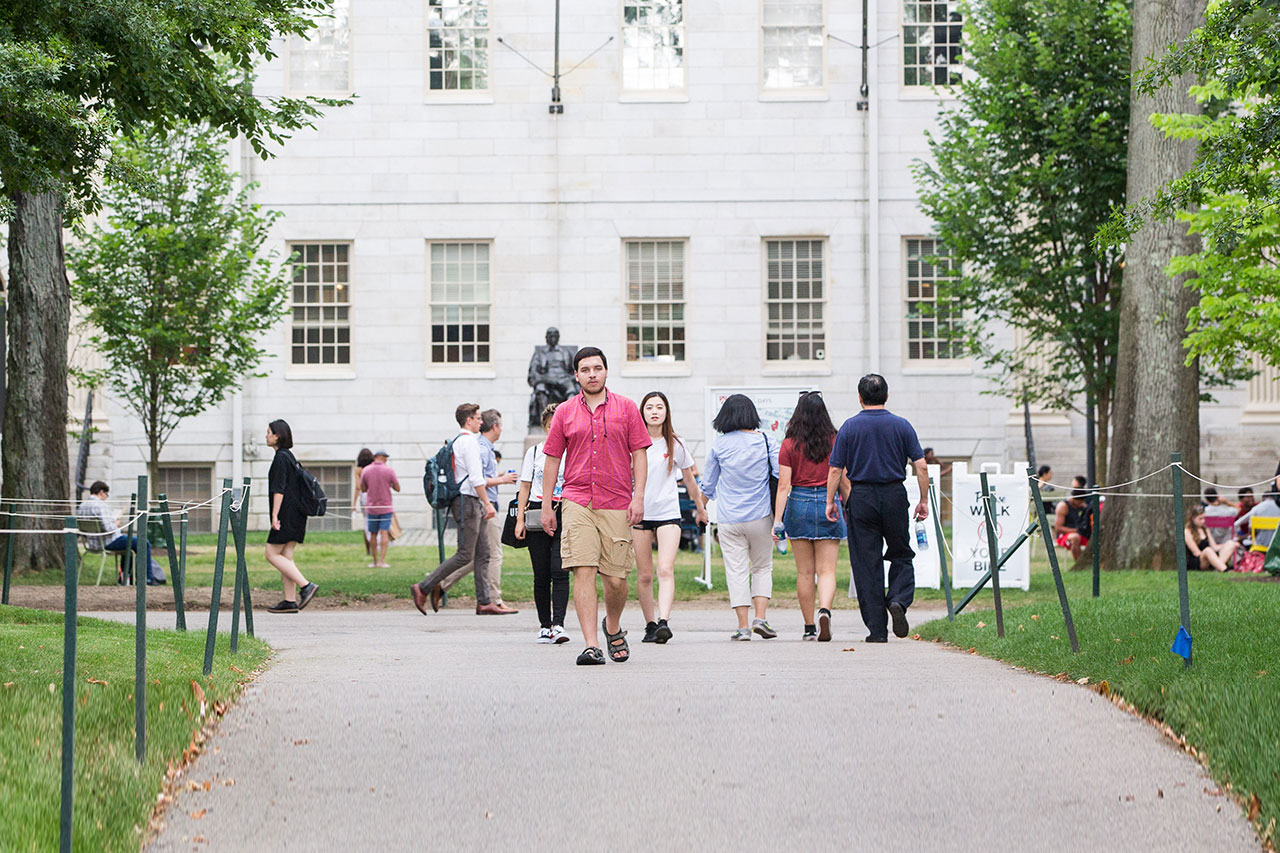 Justin Torres As a pending trial will make clear, Asian-American students are the victims of a system of racial balancing practiced by Harvard and other elite colleges.
eye on the news