Last November, a deranged 26-year-old man, Devin Patrick Kelley, opened fire on worshipers inside a church in Sutherland, Texas, killing 26. High-casualty mass shootings are tragic in human terms but anomalous statistically, at least in terms of the portion of total U.S. homicides that they represent. The vast majority of murders, which take place disproportionately in America’s low-income and minority neighborhoods, don’t get nearly the same attention. The Texas church shooting does have an important point of commonality with the majority of American murders, however: its perpetrator had a troubling criminal record. The deincarceration movement, which would return thousands of convicts to American streets, presents a threat to public safety. Repeat offenders already commit a substantial portion of the nation’s violent crime—according to one study, 53 percent of killers have at least one prior felony conviction. They will be walking the streets in greater numbers if deincarceration advocates have their way.

Consider a few examples. In October 2017, Radee Prince shot and killed three people in Maryland. Prince, it turns out, had 42 prior arrests and 15 prior felony convictions. About a month earlier, a police officer in Yonkers was shot in the face by an 18-year-old assailant not unknown to police. He had recently been sentenced to probation and classified as a “youthful offender,” despite being caught with an illegal firearm, hundreds of rounds of ammunition, a machete, and brass knuckles. Earlier in 2017, Baltimore police named Cortez Wall, an 18-year-old murder suspect, “Public Enemy No. 1.” Wall had already been convicted of a gun charge, for which he was on probation. That didn’t stop a Maryland judge from releasing him on bail on a drug charge; he had allegedly murdered someone before his release, though police did not yet suspect him. Had bail been denied, Wall would have been in custody when he became the prime suspect in the deadly shooting.

Most recently, on February 13, a Chicago Police Department Commander, Paul Bauer, was shot and killed while off-duty. Bauer was responding to a radio call that he overheard regarding a suspicious-person report in a downtown Chicago office building. The alleged shooter is 44-year-old Shomari Legghette. “It should come as no surprise” that this was not Legghette’s first run-in with the law, Chicago Police Superintendent Eddie Johnson said at a press conference held the day after Bauer’s murder. Legghette has an “extensive criminal history” that includes charges for drugs, armed robbery, and gun possession. Johnson called the tragedy “a devastating reminder of repeat gun offenders who are out on the streets of Chicago and need to be held accountable.”

Yet proponents of deincarceration want to make it easier for hardened criminals to sidestep prison and roam the streets. The ACLU, an outspoken supporter of bail reform, cheered the fact that, in New Jersey, judges required defendants to post bail in just three of 3,382 cases processed in January 2017. In an article for Time, two scholars at NYU’s Brennan Center for Justice criticized harsh sentences, not just for “nonviolent” drug offenders but also for those committing more serious offenses, calling mass incarceration “the greatest moral and racial injustice of our time.” Citing a report showing that “longer sentences do not reduce recidivism more than shorter sentences,” the authors called for the immediate release of nearly 40 percent of America’s prison population.

Do crime statistics support the claim that such a high percentage of America’s prison population wouldn’t pose a danger to the public—particularly in high-crime neighborhoods of cities like Chicago, which have driven a national increase in violent crime rates? To answer this question, I consulted Chicago Police Department records of the last 200 people arrested for actual or attempted first-degree murder, as of November 21, 2017. That someone has been arrested does not mean that he is guilty, of course, though arrests suggest probable cause. I found that an outsize number of the most serious violent crimes were allegedly committed by individuals who used to be, and perhaps should have remained, behind bars. Of the 200 individuals arrested for murder in the period examined, the vast majority were people of color, particularly black males, with previous arrests. The CPD had arrested two-thirds (133) at least once before; the average number of prior CPD arrests was more than two, and some individuals had as many as 20 “priors.” Seventy-four (37 percent) of the 200 had at least one prior CPD arrest for a violent or weapon-related offense.

These numbers don’t include arrests made by agencies other than the CPD—such as police departments in other states and in neighboring counties—or federal or juvenile arrests. Indeed, for ten of the 200 individuals arrested in the examined time frame, the first listed arrest is for violation of parole conditions, or for possession of a weapon as a felon—meaning that those individuals had been convicted of felonies not listed by the CPD, likely because the offenses occurred in another jurisdiction or before the individuals were legal adults.

The CPD’s 2011 report on murders in Chicago found that over 87 percent of suspects arrested for murder that year had prior arrest histories. That proportion remains consistent, going back at least 20 years. And the trend isn’t limited to Chicago. In a study of the 75 most populous American counties, conducted from 1990 to 2002, the DOJ’s Bureau of Justice Statistics found that “more than half of murderers (53%) had a [felony] conviction record.”

These numbers belie the notion that the criminal-justice system in cities like Chicago is systematically denying people of color second chances—a potent talking point for deincarceration advocates. Fifteen percent of the 200 suspects whose records I examined had at least five prior arrests before they were arrested for murder. Further, these numbers seriously—if not wholly—undermine the claim that the public does not benefit from the incapacitation of violent or chronic criminals.

The data confirm that the most serious crimes are mostly committed by repeat offenders whom the criminal-justice system has failed to obstruct—suggesting that, at least in some cases, sentencing and pretrial detainment practices are too lenient, not too harsh. Yet deincarceration supporters remain committed to putting dangerous individuals from correctional facilities back on public streets. To imagine that this will have no public-safety ramifications is folly.

Rafael A. Mangual is the deputy director of legal policy at the Manhattan Institute. 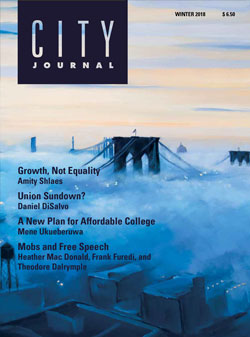 Charles Fain Lehman, Rafael A. Mangual An approach to crime-fighting that scorns policing and incarceration relies on empirical and conceptual errors.
More on