On returning to France after spending almost a decade in Turkey (and not long before the terrorist attacks of January), I discovered that the French—Parisians, in particular—have become surprisingly polite. I now find myself living in a city in which the following things happen. A kindly Parisienne not only notices that I am mildly lost, but offers to help and insists upon walking with me, well out of her way, to be sure that I am on the right path. A Darty washing machine arrives on my doorstep, exactly on time, presented by deliverymen who seem to live for the privilege of service; without so much as a grumble, they whisk away my old and broken one, too, even though I live on the fourth floor of a building with no elevator. In leaving, they express gratitude with the words, “It is thanks to you, Madame, that we work, which we so much appreciate.” Granted, the waiter at my local café knows me, but usually someone so solicitous of my well-being, so radiantly affable, charges a hundred bucks an hour and proposes to talk about my childhood, not sell me a cup of coffee every now and again.

So why are the French still widely judged to be rude? I suspect that a well-known cognitive phenomenon is at work: people see what they expect to see. The French long had a reputation for rudeness, and tourists see rudeness even when it’s not there. Since tourists expect it, though, they dish it out first—which sometimes prompts a like reaction, and not just in France. So now, the French, when they are rude, may often be responding to rudeness. Paris attracts tourists, not travelers. A traveler goes to see what is there; the tourist comes to see what he wants. Perhaps tourists want to be treated rudely by Parisians, for it would not feel like a visit to Paris otherwise.

More than most languages, one should add, French conveys civility and respect by means of verbiage that, to the American ear, seems preposterous. A failure to use the right flowery greeting in a French restaurant is felt, more or less, as a failure to smile and say “please” would be in an American one. Worse, really. Without it, you may as well walk into that restaurant with a lash in hand and address your waiter as Gunga Din. Given that tourists don’t usually understand this, the change in the way Parisians tend now to respond (very nicely) is astonishing.

The perception of rudeness may also be the result of linguistic misunderstanding. The nasalization of French consonants is distinctive; it often obscures the quality of French vowels, causing confusion to nonnative speakers. French speakers find equally baffling the vowels pronounced by foreigners. Those vowels are the difference between ship and sheep, as the ESL teachers would explain, or between sheet and Shinola, as they say in less professional contexts. French lacks clear stress in its syllables; foreigners tend to give French syllables unwarranted stress, with the consequence that French speakers really can’t understand them. They are not pretending to misunderstand out of snobbery. They just don’t understand.

But the French are nicer these days, even when they can’t figure out what the visitor from Chicago is saying. Why the change? For one thing, like everyone, the French have become better traveled and more aware of other cultures. For another, a concerted government campaign has taught the French that when tourists do strange things, it’s not because they are rude; it’s only because they are strange. The campaign also emphasizes that locals should not respond in ways that might in turn seem rude, particularly because tourists bring in lots of money—on which France relies. For yet another, the younger generation has received better education in English and is more confident speaking it. Yet no matter how demonstrably Parisian manners have improved, tourists still see what they expect to see and what they’ve read about: rudeness. And they keep complaining about it—which is, I think, terribly unfair.

So if you visit and find the French to be rude, I gently submit to you that the problem may not be the French, but something else—though, of course, it would be entirely rude to suggest that it might, in fact, be you.

Claire Berlinski, a City Journal contributing editor, is an American journalist who lives in Paris. She is the author of There Is No Alternative: Why Margaret Thatcher Matters. 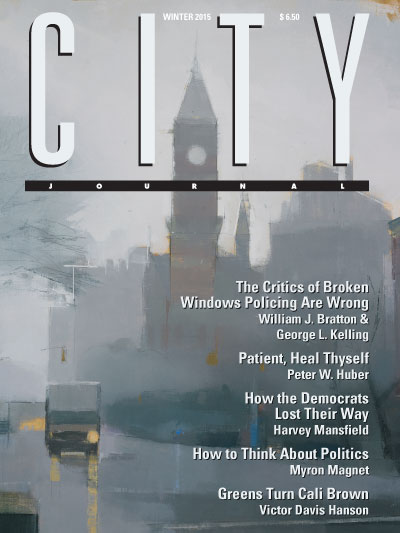