Return of the Notman

I mentioned a couple of lines from Robinson Jeffers’s poem “Shine, Perishing Republic”—and Daniel Ellsberg took up the recitation: “And boys, be in nothing so moderate as in love of man,/ a clever servant, insufferable master./ There is the trap that catches noblest spirits, that caught—/they say—God, when he walked on earth.”

Ellsberg, thinking of the poem’s famous opening words—“While this America settles in the mould of its vulgarity,/ heavily thickening to empire”—asked me, “What year do you think that poem was written?” He meant, it sounds like yesterday—the vulgarity and the gloomy sense of some national “perishing.” As he knew, the answer was that it came from the 1920s, from the time of Warren G. Harding, an era perhaps kindred in its corruption to our own. The present always flatters itself that it is uniquely awful. Yes and no: awfulness (vulgarity, stupidity, atrocity, and worse) is probably a constant of human nature, but technology—the perfecting of machine guns, for example, just in time for the Battle of the Somme, or, later, the advent of nuclear weapons, or, in the twenty-first century, the arrival of smartphones and social media—will radically change the range and scope of the instruments with which human nature expresses itself.

We were sitting on an outdoor wooden bench at a writer’s retreat in upstate New York, in high hills on the northern edge of the Catskills. Ellsberg, whom I had just met, was enjoying an hour’s procrastination; he had been banging away at his book, published last year as The Doomsday Machine, whose message is even bleaker than Jeffers’s was. I thought of our conversation when I read a news story recently about scientists discovering opioids in the systems of fish and other creatures in Puget Sound: human corruption infects innocent nature—here was Jeffers’s theme again. The waters of our addictions return with the tides.

The age of opioids (among other contaminations) suggests a look back at the odd Robinson Jeffers, and at what he said in his poems—and at his cranky and ruthless life as a semi-solitary poet living on what was then a wild stretch of the central California coast. Jeffers and his wife and twin boys lived in a house that he built with boulders that he rolled up from the beach. He wrote his semi-savage verses—with their relish of fierce Pacific storms and predatory birds and the impassive cruelty of nature—in a stone tower that he built nearby. He described his philosophy—his point of view, anyway—as “inhumanism,” whose central tenet was that humanity, ruling and ruining the earth, is, on the whole, a self-important, self-indulgent pain in the neck. Every prospect pleases, and only man is vile. Jeffers indulged an unwholesome preoccupation with incest and violence, as if to confirm that divinity, disgusted by the human, had invested itself elsewhere. Divinity could be recovered only by a savage clarity of eye and mind.

In nineteenth-century paintings of the Hudson River school, nature was grandly dominant, though not savage; human figures, if any, were as tiny and poignant as field mice, lost in the landscape—much as Ellsberg and I, sitting on a bench, looking at mountains, were, in the scheme of things, miniscule. 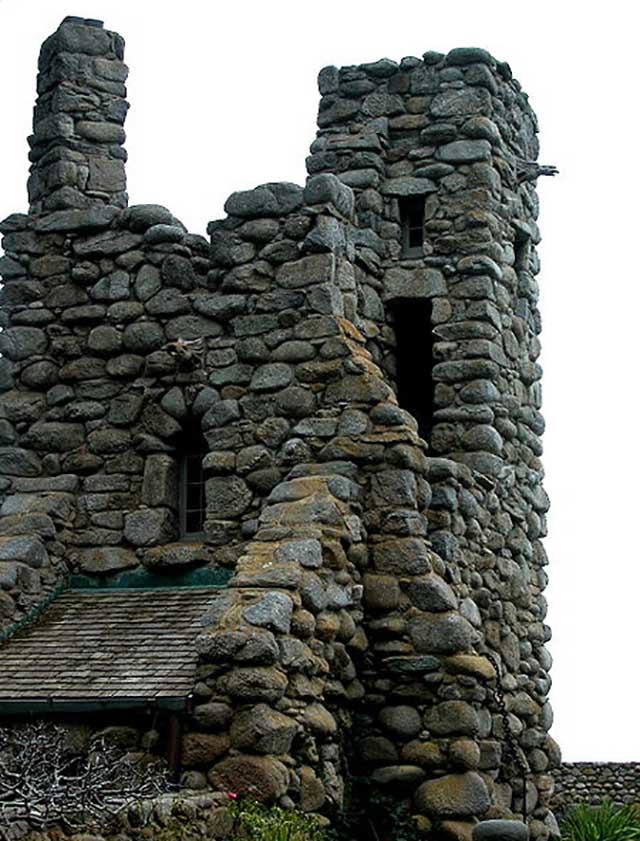 The world evolves away from nature and humility. Nature does what it can, from time to time, to remind the human race that it has not gone away but, on the contrary, has become even more emphatic in its moods. All this seems pure Jeffers. Meantime, we lose ourselves wandering in the confusing metaphysical optics of social media, of alienated screens and chaotic global information in which the human presence is overwhelming and clamorously self-important and self-assertive—partly in reaction to a buried fear of its own meaninglessness.

As for mighty Nature—oceans and mountain ranges and other phenomena that were previously august—they are the Old Majesty deposed, like King Lear on the heath (gone mad with hurricanes and heat waves and floods and forest fires). Having repudiated the kingly Father, we are left with the generations of Goneril and Regan, the horrible daughters. They chatter and tweet the day away and confirm Jeffers’s fears about the nastiness of the human race. (The sweetest moments on Facebook involve not people but dogs. Dogs, at least, are not political: they give us nature in a domesticated and goofy and instinctively loving manifestation. The more that people take to snarling and biting one another, the more they sentimentalize their dogs.)

Jeffers was an inconsistently gifted poet and a crackpot with the courage of his convictions. Toward the end of his career, he paid a price for opposing American participation in World War II and for his outrageous statement that Hitler and Franklin Roosevelt would be “hanged from the same tree.” His reputation faded; people condemned him, then they forgot him.

He is more than half a century dead. There may be time, though, to spare a chastened thought for his “inhumanism,” which he described as “a shifting of emphasis and significance from man to notman; the rejection of human solipsism and [instead] a recognition of the transhuman magnificence. . . . This manner of thought and feeling is neither misanthropic nor pessimistic. . . . It offers a reasonable detachment as a rule of conduct, instead of love, hate and envy . . . it provides magnificence for the religious instinct, and satisfies our need to admire greatness and rejoice in beauty.”

That was Jeffers’s benign version of “notman.” Today a new and different notman is in the offing—the notman that is the universe of robotics and virtual reality and artificial intelligence and biological engineering and the seductions of connectivity—not a rough beast slouching toward Bethlehem, but a smooth one. In “Shine, Perishing Republic,” Jeffers described man as “a clever servant, insufferable master.” There could be no more succinct and cautionary description of computers and the new electronic dispensation: A clever and useful servant . . . but beware.

Hope, the Secret of Everything

Lance Morrow Thoughts on the Great Resignation
eye on the news

Lance Morrow July 4 should be an occasion for Americans to put aside the punitive memory of grievance and embrace the reverent memory of gratitude.
More on