The Resistible Rise of Margaret Chin

Margaret Chin’s fund-raising dinner seemed like a generic American campaign event: the banner on the wall behind the lectern; the rows of neat place settings, 500 in all; the table out front staffed by brisk workers collecting money and names. Since, however, the restaurant was Chinese, the chicken would not be rubber, the only evident deviation from the norm.

One wonders, however, how much the Patrons (at $100 a head) and Friends ($35) assembled last fall knew about the 37-year-old former Democratic state committeewoman they were patronizing. For Ms. Chin had risen to prominence by way of the Communist Workers Party, a Maoist sect that decided several years ago to begin infiltrating mainstream politics.

The Communist Workers Party got its start in the early Seventies as the Workers Viewpoint Organization, drawing its membership largely from Chinese-American students at City College. It declared its “guiding ideology” to be “Marxism/ Leninism/Mao Tse-Tung thought.” Its publications mourned the death of Soviet dictator Leonid Brezhnev and hailed the economic policies of Pol Pot. It rejected Deng Xiaoping for being too soft on the West and capitalism, and embraced the Gang of Four.

In 1979, the party briefly burst into the national limelight when it decided to seek a direct confrontation with its counterparts on the bug-head Right. Party members in North Carolina began by breaking up a Ku Klux Klan-sponsored screening of the D. W. Griffith film, “The Birth of a Nation,” in the town of China Grove. Emboldened by this success, the party announced a “Death to the Klan” rally in Greensboro, daring local Klansmen and Nazis to show up.

Unfortunately, they did. Both sides were armed. The shoot-out that resulted on November 3, 1979, was a lopsided one, and five Communist Workers Party members were killed. Two party members held a press conference in New York to denounce the killings, and got their picture in the New York Times. One of them was Margaret Chin.

After this setback, the Party did not turn against violence; it just decided to pick on less dangerous opponents.

In August 1980, the Democratic Party provided a ripe target by holding its quadrennial convention in New York. During the convention, 150 CWPers stormed a Democratic fund-raiser at the Plaza Hotel, injuring six cops. The next evening a contingent of 200, armed with pick handles and Mace, tried to fight their way into Madison Square Garden, the convention site; 15 were arrested.

In the meantime, the CWP was acquiring a local power base in Chinatown, in the form of a community group calling itself Asian-Americans for Equality. The latter does not avow its connection with the CWP, but for years the two groups shared an office and phone number, and CWP veterans had a way of turning up as Asian-Americans for Equality leaders, notably in the form of its president from 1982 to 1986: Margaret Chin.

Asian-Americans for Equality resembles a familiar type of New York activist group, collecting grievances and brokering deals. In 1985 it made the news when it, charged that federal regulators had committed a “racist” act in closing the Golden Pacific National Bank. When the Chinese-language press raised questions about possible links between Asian-Americans for Equality (AAFE) and the bank’s owner, reporters from five of the papers received threats.

As time went on, the CWP began casting a wishful eye at mainstream electoral politics. An early sign of attitude adjustment came in 1984 when the party endorsed Jesse Jackson for president, though its publications still denounced the civil rights leader as an “infamous careerist.” A year later, it was ready for a metamorphosis.

At a convention in mid-1985, the CWP formally dissolved itself, in its place arose a new organization, the New Democratic Movement, devoted to establishing “local power bases.” Jerry Tung, general secretary of the former CWP, explained the idea to the assembled faithful. “[O]nce you get people elected or appointed to office, you can award contracts to friends.... When you can raise money for political purposes, when you do it in the right place in the right atmosphere, and look right, and the [mainstream] party bosses are there, then that money makes them take you seriously.” The meeting closed with a rousing chorus of the “Internationale,” for auld lang syne.

It would not seem easy for a left-wing sectlet to build a serious power base in Chinatown, then as now one of the most politically conservative neighborhoods in New York City. Instead, the CWP alumni played what can in retrospect be seen as a brilliant crosstown gambit. The Village Independent Democrats, the venerable liberal club, had fallen on hard times. Money, as Mr. Tung so justly put it, makes politicians take you seriously, and as former CWP members flooded into the Village Independent Democrats they brought cash and credit to help it wage its political battles.

The entry did not go unresisted. Opponents in the Village found a prominent outside voice in Illinois Democrat Adlai Stevenson III. Stevenson had come to national attention as a victim of a bizarre run-in with cult politics: While he was winning his state’s Democratic nomination for governor in 1986, two followers of Lyndon LaRouche were managing to get on the ticket as his running mates in the same primary. Stevenson felt himself obliged to renounce the Democratic nomination and run as an independent. He lost.

After losing, Stevenson had plenty of time to reflect op the havoc that cults can wreak in mainstream politics. In 1987 he wrote an open letter to Village Democrats, urging them to reject the local district leader candidates of the Village Independent Democrats, which had chosen to make common cause with “CWP-style extremism.” An outraged New York City political establishment mobilized, like antibodies, to expel the alien intruder: in this case not the CWPers, but Adlai Stevenson. The Village Independent Democrats sent out a response charging Stevenson with “red-baiting” and “resuscitat[ing] the work of Joe McCarthy.”

Asian-Americans for Equality (AAFE) began to go big time. Its annual banquets in Chinatown garnered greetings from not only an array of Democratic officeholders, but also such Republicans as Senator Alfonse D’Amato and Representative Bill Green. Since the mid-Eighties, AAFE has taken in more than $2 million in grants from the State Department of Social Services and Division of Housing and Community Renewal and from the Lower East Side Area Policy Board, a funnel for federal monies.

Ms. Chin’s rise in the world tracked AAFE’s. In 1986, backed by the Village Independent Democrats, she won election to the Democratic state committee from the 61st Assembly District. Since her reelection in 1988, she has graced official women’s committees for David Dinkins, Mario Cuomo, and Robert Abrams, and Asian-American committees for Carol Bellamy and Deborah Glick. Now she hopes to win a seat in the expanded 51-seat City Council, whose smaller districts were in fact intended to allow for more representation of the city’s ethnic enclaves. Chin hopes to run in a lower Manhattan district encompassing all of Chinatown, with the politically active Hispanics of the Lower East Side assigned to another district. A victory would make her, as her campaign leaflets proclaim, “the first Asian-American council member in New York City history.”

Extremists around the country regularly try to enter mainstream politics, but elsewhere the major parties usually make an effort to stop them. Not so in this case. The lack of opposition to Ms. Chin is symptomatic of the way the city’s flaccid one-party political culture works, or rather doesn’t. New York not only lacks a sense of political hygiene, but makes it a point of honor to lack it. What else can explain the aching slowness with which both the campaign and the administration of Mayor Dinkins have distanced themselves from Sonny Carson, the racist crackpot behind the boycott of Korean fruit stores in Flatbush?

Opposition among Ms. Chin’s potential constituents has been relatively slow to organize. I spoke to a number of Chinese-American journalists and political figures who privately shuddered at her politics, but not one was willing to be quoted by name. Some thought it quite possible that she would be elected. The feeling seemed to be that the overwhelming wish of Chinatown residents is not to incur the wrath of the city’s political elite, and that the way to avoid rocking the boat might be to accept the proconsul designated for their representation, someone who has shown that she has what it takes to work closely with those who govern New York.

Which suggests a wider problem for city politics. The larger culture is content to buy Asians’ vegetables, ride Asians’ taxis, and nod from time to time toward the crucial role that Asians play in the city’s economic vitality. But of Asians’ opinions or political aspirations it knows nothing. One may hope that this changes as Asians emerge as the coming minority of the 1990s, with Indians, Pakistanis, Bangladeshis, and others joining the Chinese, Koreans, and Vietnamese who are already here in numbers.

In the meantime, however, the result of the general inattention is to make it all too easy for a fringe group to establish itself as ethnic representative by way of its clout in the wider political arena, as Asian-Americans for Equality seems to be doing with its Village-to-Chinatown carom shot. It would be ironic if the residents of Chinatown, many of whom braved great perils to flee the tyranny created by Mao Tse-Tung, were to find themselves officially represented by one of Mao’s last disciples. 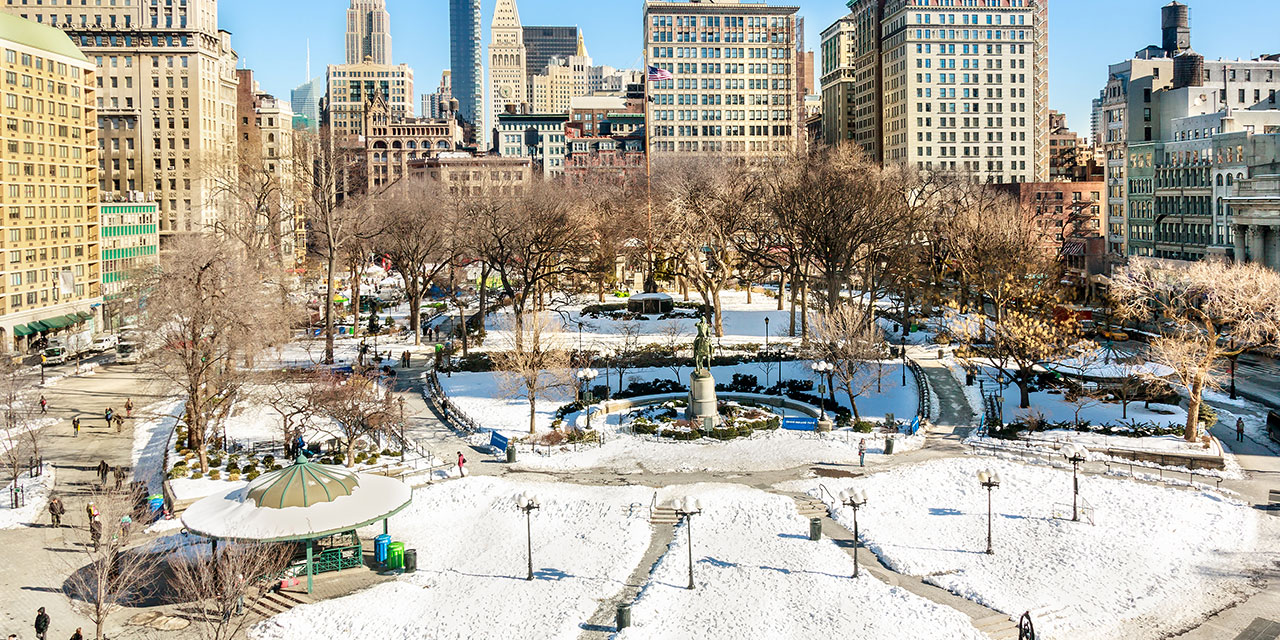 Richard Brookhiser The Manhattan neighborhood is safe and inviting in ways that I once couldn’t have imagined.
audio

Richard Brookhiser on William F. Buckley and Conservatism Then and Now

Richard Brookhiser
from the magazine