Conservative advocates of same-sex marriage insist that their goal is not a radical alteration of the institution itself. They favor the legal recognition of same-sex partnerships as marriages in order to secure "equal rights," they say. Their goal in redefining marriage is not to weaken or abolish it but to expand access to it, while leaving its core features intact. Far from harming marriage, they contend, the move to same-sex marriage would strengthen the institution.

Though this argument has a certain superficial appeal, it is profoundly mistaken. The issue is not one of equality or the right to participate in a valuable social institution. What divides defenders of traditional marriage from those who would redefine it is a disagreement about the nature of the institution itself. Redefining marriage will, of course, fundamentally change the posture of law and public policy toward the meaning and significance of human sexuality, procreation, and the bond between the sexes. Even more important, there are powerful reasons to fear that the proposed redefinition of marriage will destabilize and undermine this already battered institution.

To understand the destabilizing effects, consider this scenario. A young man and woman are engaged to be married. A month before the wedding, the man approaches his fiancée to ask whether she will consider an "open marriage," in which they will free each other from the duty to be sexually faithful.

Even today, the man's proposal is shocking, and his bride-to-be will almost surely be horrified by it. Nearly everyone would say that what the man has proposed is something other than a true marriage, since the norm of sexual exclusivity within marriage is essential to the institution. That is why the overwhelming majority of couples entering marriage do not even discuss whether they will follow the norm; they simply accept it.

Do most American husbands and wives honor the principle of sexual exclusivity in practice? The best evidence says yes. In their rigorous and acclaimed 1994 study on American sexual behavior, University of Chicago sociologist Edward Laumann and his associates found that 65 to 85 percent of American men and more than 80 percent of American women (in every age group) had no sex partners other than their spouses while married. These figures are remarkable, especially if we recall the many ways in which popular culture has mocked or trivialized human sexuality and the demands of marriage in recent decades.

But do most same-sex couples accept the norm of sexual exclusivity? In a 1999 survey of such couples in Massachusetts, sociologist Gretchen Stiers found that only 10 percent of the men and 32 percent of the women thought that a "committed" intimate relationship entailed sexual exclusivity. An essay called "Queer Liberalism?" in the June 2000 American Political Science Review reviewed six books that discussed same-sex marriage. None of the six authors affirmed sexual exclusivity as a precondition of same-sex marriage, and most rejected the idea that sexual fidelity should be expected of "married" homosexual partners. For more than a decade, a wide array of authors who favor redefining marriage to include same-sex partners have advanced similar views. In a 1996 essay in the Michigan Law Review, University of Michigan law professor David Chambers even suggested that marriage should be redefined to include sexual unions of three or more people--so-called polyamorous relationships.

Honest activists admit this widespread rejection of exclusivity. Writing in 1997, journalist and activist Michelangelo Signorile used the terms "postmodern" monogamy and "emotional" monogamy to describe the living arrangements of many same-sex couples. As those adjectives suggest, such arrangements do not entail sexual exclusivity as a matter of principle. Signorile also noted that "a great many gay men" simply favor "open" partnerships.

While Signorile was describing "monogamy with a little breathing room," activists in the organization known as Sex Panic took a more radical line, ridiculing the aspiration to monogamy and other "small-town values." Sex Panic was largely composed of academic "queer theorists" (men as well as women), and according to journalist Caleb Crain, it defended "bathhouses, promiscuity, and anonymous sex" from "moralizing forces." More recently, Andrew Sullivan, a supposedly conservative advocate of same-sex marriage, has praised the alleged "spiritual value" of anonymous sex.

To outsiders, these views might be incomprehensible. Since the onset of AIDS, same-sex male couples would seemingly have an especially great incentive to embrace the norm of sexual exclusivity. The general unwillingness to do so is telling. Equally telling are accounts of rampant promiscuity among active male homosexuals before the AIDS epidemic, such as that provided by Randy Shilts in his 1987 best-seller And the Band Played On.

Some proponents of same-sex marriage believe that its legalization will help same-sex partners be sexually faithful. The evidence, however, suggests that acceptance of the norm of sexual exclusivity is a minority view among homosexuals in the United States and elsewhere. Furthermore, because intimate relations between persons of the same sex are inherently--and not merely contingently--unconnected to procreation, there is no principled reason to limit same-sex marriage to two persons. Thus, one can reasonably predict that same-sex marriage is going to be intrinsically unstable, as Sex Panic recognized in expressing its contempt for the institution. As if to confirm these points, the first same-sex couple to receive a marriage license in Provincetown, Massachusetts, told the press that they had an "open" marriage.

By contrast, the norm of sexual exclusivity within real marriage is both intelligible and morally sound. The norm originates in the sexual complementarity of a husband and wife as a biological unit, and it functions to increase the likelihood that children will be reared by their biological parents. The norm binds a man and a woman in a covenant of mutual support, premised on the duties of fidelity and exclusivity. The norm is also meant to reduce vulnerability--not only of children but also of mothers and pregnant women.

In response, some might take the line of Yale law professor William Eskridge, who asserts that traditional marriage is now more "relational" rather than "procreational." But this view is wrong. In the past century, roughly 90 percent of American women were married by the age of 30, and between 80 and 90 percent had at least one child by the age of 40.

For all these reasons, the legal recognition of same-sex partnerships as "marriages" is likely to destabilize further an institution already damaged by the casual acceptance of cohabitation and unwed childbearing, as well as by the high rate of divorce. If a desire to stamp social approval on homosexual conduct and relationships leads to a redefinition of marriage that detaches it not only from biological complementarity and procreation but also from the related norm of sexual exclusivity, what will be left of the institution?

It is often remarked that marriage tends to "civilize" sexuality—particularly male sexuality. Although the complete picture is more complex than that, there is truth in this remark. But there is no magic in a word. Redefining marriage means abolishing it and shifting the label to a new institution—one for which there are no grounds of principle for sexual exclusivity or monogamy. Thus redefined, marriage won't function to civilize anybody. If marriage is redefined out of existence, our entire society will be harmed, but the harm will be distributed unequally. In the libertine utopia of "sexual freedom," women and children will suffer the most. 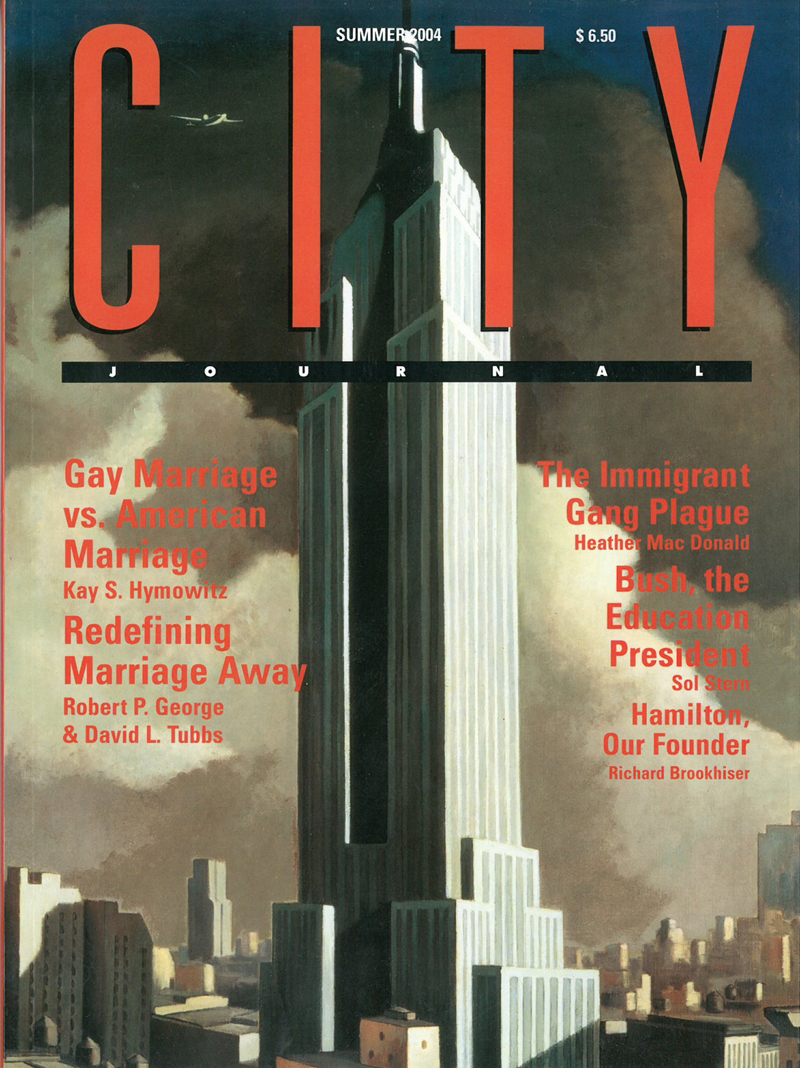 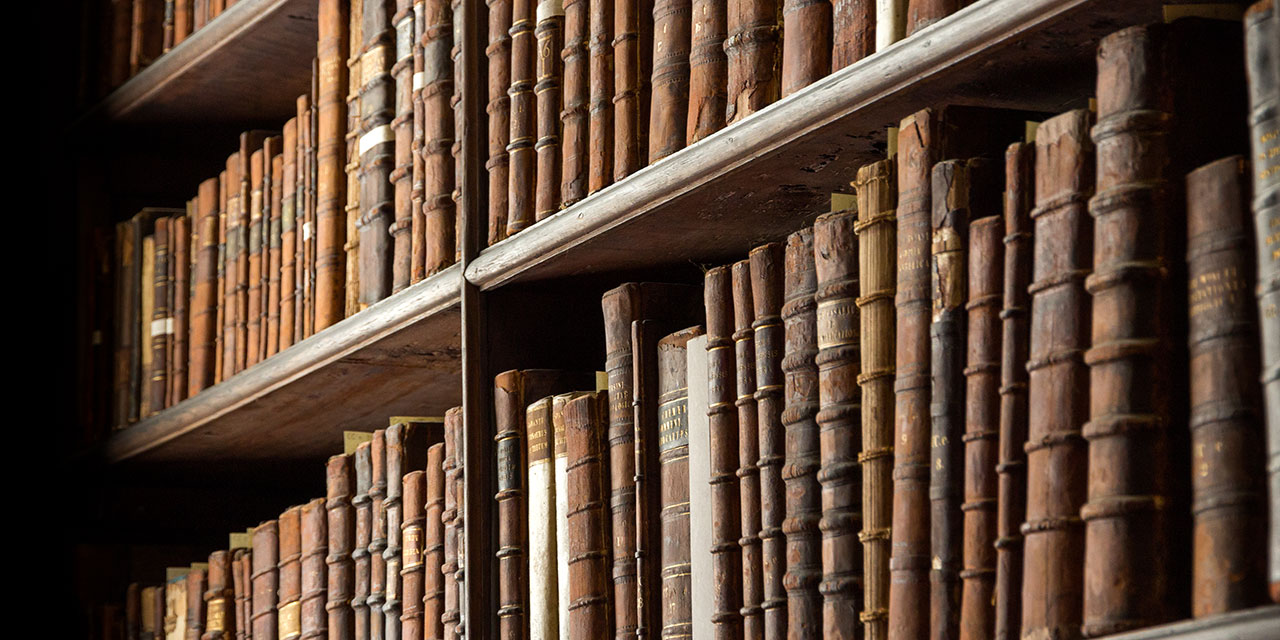 The Value of Liberty—Ancient and Modern

David L. Tubbs, Nathan Pinkoski Benjamin Constant’s writing reminds us that both conceptions have value.
from the magazine

Why We Need a Marriage Amendment