City Journal launched 30 years ago, when New York and other American cities were in profound crisis. Crime and disorder were endemic. New York City in 1990 suffered more than 2,200 murders—one every four hours. Welfare was a way of life for millions. Schools were an unruly, mediocre mess. Businesses and residents escaped the city in droves. The mainstream view on this ongoing urban disaster was pessimistic: decline was fated, at least until America somehow solved its deep structural inequities.

City Journal’s purpose was to counter that pessimism—to renew, through sharp analysis and cutting-edge journalism, a vision of the city as a place of economic opportunity and cultural dynamism. Decline wasn’t destiny; it was the result of bad ideas and policies. From its first issue, the magazine offered alternatives—from proactive, data-driven policing to welfare reform to educational pluralism—that proved remarkably successful when New York, Los Angeles, and other cities began adopting them, in whole or in part, in the 1990s, sparking a breathtaking urban renaissance.

In 2020—a year marked by a frightening viral pandemic and widespread urban violence after the late May death in police custody of George Floyd, a Minneapolis African-American man—that renaissance seems in trouble. In “New York’s Year from Hell,” Nicole Gelinas describes the damage inflicted on the city’s social and economic fabric by Covid-19 and the summer’s riots and looting. To save the city, effective leadership and the right policies will be necessary, just as they were in the 1990s, but New York’s response thus far has been wanting, Gelinas warns.

In fact, many of the bad ideas that caused the previous urban crisis—including the destructive nostrum that criminals are victims of an unjust, racist society and should be treated leniently, and that the police are an oppressive force—have come roaring back over the last few years, and nowhere more than in progressive Seattle. Christopher F. Rufo’s “Burn It Down” reports on the effort by activists and far-left politicians in that city to shut down the police and, more broadly, the entire criminal-justice system because of alleged racism and replace them with social welfare and psychotherapy.

A new generation of young socialist urban politicians promoting these radical ends is already a powerful force in Seattle, and they look to expand their influence on New York politics in 2021, Steven Malanga’s “City Hall Socialists” reports. Economist Edward L. Glaeser blames the rise of these new leftists on an economy that increasingly rewards established insiders over newcomers. In “How to Fix American Capitalism,” he explains how we can renew the crucial freedoms to build, to work, to sell, and to learn—and diminish support for the neo-socialists, who’ll entrench insiders even more. James B. Meigs’s “The Chump Effect” explores how policies that favor rule-breakers and opportunists generate populist anger, on the right and on the left.

Policy journalism has always belonged to City Journal’s distinctive story mix, and Heather Mac Donald has helped define the genre with her fearless investigative essays. Her latest, “The Bias Fallacy,” is typically unflinching. In response to Floyd’s death and the subsequent lawlessness, the business community and the universities have pledged themselves to righting their purported systemic racism by recruiting more blacks and undergoing more racial-sensitivity training. Yet as Mac Donald documents, the real reason for demographic disparities in education and employment is a persistent achievement gap between blacks and other groups that starts in the early grades. As long as that gap persists, so will the disparities.

There is much more in this 30th anniversary issue, from Bruno Maçães on the emergence of a technological universe that escapes state control to Theodore Dalrymple on the prevalence of cant in contemporary life, from William Voegeli on the complicated history of white flight to Michael J. Totten on the horrors of the 1918 Spanish flu. But before readers dive in, let me thank them, and our supporters, on behalf of everyone at the magazine and the Manhattan Institute for making our work possible. The ideas in these pages will be more needed than ever if we are to protect the urban gains of recent decades and build on them. 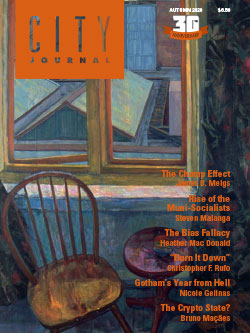