What do a rattletrap bus plying the roads of central Anatolia in 1963 and a Delta Airline 757 zooming to L.A. in 2018 have in common? Having traveled in both, I can tell you that, other than being conveyances, they have nothing in common—well, not quite. Until just recently, they both included the distinct possibility of sitting next to someone clutching a bleating goat or rousing rooster. I used to fly a lot and still do more than I’d like, and in the last several years, I’ve noticed that dogs—pets, not guides for the blind—have paid rapt attention to the safety video that I’ve come to know by heart. On one flight, there were three of the critters (one of whom misbehaved), along with a rabbit in a cage. For a moment, I wondered if I was on a modern jet or Noah’s Ark.

So, when I recently booked a flight from D.C. to Detroit, I wasn’t surprised to find on the e-mailed flight receipt a notice warning of “new service and support animal requirements.” Clicking on the link revealed how desperate the flying ark has become.

The issue clearly is not trained service animals for the physically disabled. Folks with such dogs have to prove that the animal has had its shots from a licensed veterinarian, and that’s it, with the exception that the dog has to be small enough to fit into the customer’s seat or foot space. The real problem is the “Emotional Support/Psychiatric Service Animal.” Either flying is driving lots of people crazy, or people have figured out a way to keep their dogs from being shipped in the belly of the plane. (Granted, after the death of a dog that an airline attendant cruelly ordered placed in an overhead bin, passengers’ demands for traveling with their dogs beside them will only increase.) In any case, fliers who want Fido to share the seat will now have to fill out an “emotional support/psychiatric service animal request” signed by a licensed medical/mental health professional who affirms that “the customer has a mental health disability listed in the Diagnostic and Statistical Manual of Mental Disorders.”

But it’s not just Fido. The new requirements list animals that cannot be counted as supporting emotional and psychiatric health, and one can only presume that Delta here speaks from what it thinks it could reasonably expect: “Hedgehogs, Ferrets, Insects, Rodents, Snakes, Spiders, Sugar gliders, Reptiles, Amphibians, Goats, Non-household birds (farm poultry, waterfowl, game birds, and birds of prey), Animals improperly cleaned and/or with a foul odor, Animals with tusks, horns, or hooves.” Sugar gliders are pint-size marsupials—and since “marsupials” are not on the list and do not have hooves, one could conclude that if its rump is small enough, you could board a plane with a comfort kangaroo, assuming that your shrink signs the form. One might also conclude that an improperly cleaned or smelly animal could include a human being (if you fly enough, you’ll surely encounter one of these).

Delta must think that many of its customers have a screw or two loose, but for those who need mere dogs, the airline doesn’t want them growling or barking or relieving themselves in the cabins or eating off the seatback tray tables. Don’t count on a dog-free flight anytime soon, though. Delta’s plan could boomerang now that one can get one’s aviophobia certified. It could turn out that there are as many such aviophobics as there are people who believe that they’re being poisoned by gluten. And if you’ve been to the supermarket lately, you know that’s a lot.

Commercial airline flight is the cheapest, most convenient, and by far the safest means of travel ever known. There are people who are really afraid to fly (I know one quite well). If I were I one of them, I’d think it easier to take a tranquilizer than lug around a dog that could cause someone with asthma to get sick. Moreover, what aviophobes fear is a crash—so to calm that fear, they subject their dear pooch to the same risk that they unreasonably, but really do, dread. Lots of people, however, just like flying with their dogs and don’t mind inflicting them on others. So I won’t be surprised when I board a flight and sit next to a certified comfort kangaroo. And as for fewer dogs, I’m not counting my chickens. 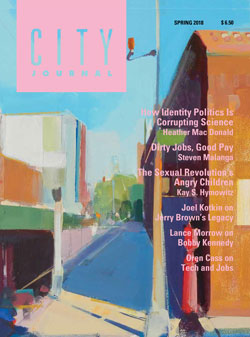 Jerry Weinberger From classical times until the nineteenth century, almost all philosophers wrote between the lines.
More on