The Mystic Chords of Memory

When I first saw the commemorative plaque at 25 Brook Street, George Frideric Handel’s London home from 1723 until his death in 1759, I murmured, “He was the greatest musician who ever lived.” My startled son replied, “I didn’t know you thought that!” But he was looking at the plaque next door, commemorating rock and roller Jimi Hendrix, who lived at number 23 more than two centuries later, in 1968 and 1969.

Though New York doesn’t have that historical thickness, you can still see a trace of New Amsterdam governor-general Peter Stuyvesant’s seventeenth-century grave in the foundation of Saint Mark’s-in-the-Bowery, or visit Alexander Hamilton’s tomb in Trinity churchyard, near where he lived and worked as Treasury secretary when New York was the nation’s capital from 1785 through 1790. And every so often, some other concrete reminder of New York’s glittering past prompts the realization that you, too, are walking famous pavements, as Virginia Woolf called London’s storied streets. J. P. Morgan’s office at 23 Wall Street—“The Corner,” as everyone knew it when it was the hub of global finance—still stands (though sadly empty today); and you can look out of the bay window of Samuel J. Tilden’s Gramercy Park house, now the National Arts Club, where the former New York governor addressed the crowd gathered to celebrate his popular-vote victory in the 1876 presidential election, only to have Rutherford B. Hayes win the hotly contested electoral vote tally and bring Reconstruction finally—and tragically—to an end.

But my nearby, everyday link to Gotham’s multi-layered history is Straus Park, a leafy triangle between 106th and 107th Streets, where West End Avenue ends at Broadway. It is named for Isidor and Ida Straus, whose mansard-roofed frame house—among the last of the vast-lawned country mansions lining the Hudson in what was then the village of Bloomingdale—stood a block to the south, until a developer tore it down to make way for the apartment building at 924 West End Avenue, just months after the Strauses drowned in the wreck of the supposedly unsinkable Titanic.

Isidor was one of New York’s Gilded Age German-Jewish grandees, an exemplar of how much opportunity the city offered its millions of immigrants in those decades—and of how much those immigrants enriched the city. In 1854, the nine-year-old embarked from Bavaria to Talboton, Georgia, where his father, who had arrived as a peddler two years earlier, had bought the crockery concession in one of the four dry goods stores that Rowland Hussey Macy had established from Massachusetts on down, before opening his grand store on New York’s Sixth Avenue in 1858. By 1896, just after Isidor’s brief service as a U.S. congressman, he and his brother Nathan had so greatly expanded their father’s business that they bought Macy’s New York store outright, as well as Brooklyn’s Abraham and Straus department store. It was they who moved Macy’s to its present Herald Square spot in 1902. Grateful for his American success, Isidor was a generous philanthropist, especially as a leading funder of the Educational Alliance, one of Gotham’s first settlement houses, dedicated to Americanizing East European Jews in the days when private charity extended a notably effective helping hand to striving and struggling immigrants.

When the Titanic began to sink on April 14, 1912, Isidor refused a lifeboat seat, with women-and-children-first chivalry. His wife stepped onto the lifeboat’s gunwale but immediately drew back, steward Alfred Crawford told the Senate investigating committee only five days after the wreck. She turned to her husband, Crawford reported, and said, “We have been living together for many years, and where you go, I go.” She ordered her maid into the lifeboat in her place, reportedly draping her fur coat over the young woman, noting that she would no longer need it. When last reported seen, the Strauses were sitting side by side in deck chairs, holding hands. Isidor’s body was found and now lies in Woodlawn Cemetery. Ida disappeared into the sea. 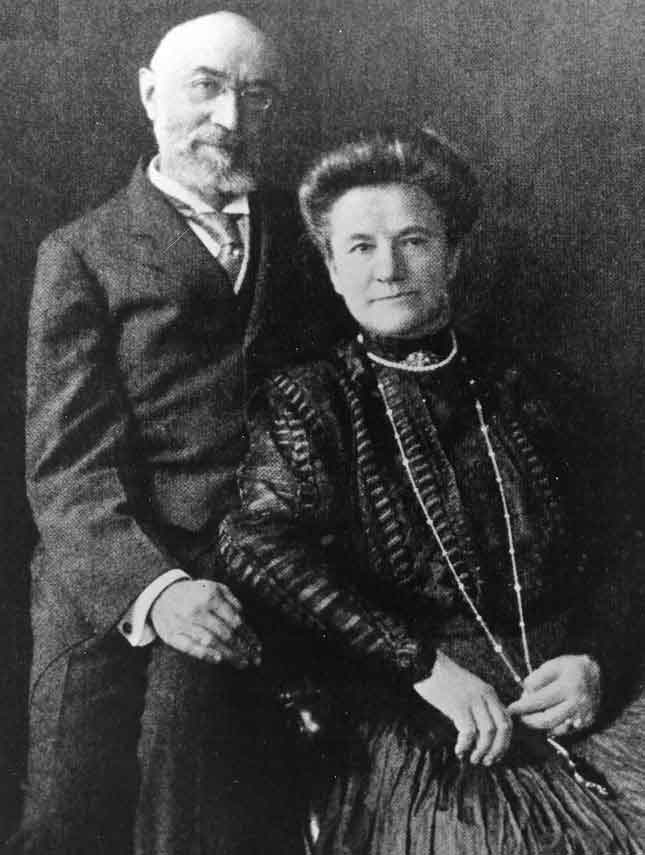 So great was Gotham’s grief at the couple’s death that, with every seat filled at their Carnegie Hall memorial service, and 300 standees at the back, hundreds more had to be turned away. The city immediately changed the name of the little triangle near their house from Bloomingdale Square to Straus Park, and public subscriptions poured in for a memorial to them there—a testament not only to New Yorkers’ affection for the Strauses, but also to the fact that grand department stores, Macy’s above all, along with the daily newspapers, the public schools, and the local major league baseball teams, were among the key institutions that gave turn-of-the-century U.S. cities their sense of a shared civic culture.

The memorial, profoundly moving in its restraint and evocativeness, is the work of sculptor Augustus Lukeman and architect Evarts Tracy. A reclining, Greek-gowned bronze figure of Memory, her head pensively propped on her hand, looks out over a long granite basin of water, as if searching for the spirits of the two shipwrecked souls. Or at least did look out over a sheet of water. Sometime during New York’s long decline from the mid-1960s to the mid-1990s—I forget exactly when, though I remember the park becoming seedier and more menacing—the plumbing broke down, and the pool dried up. A Parks Department renovation that began in 1995, a year after Rudy Giuliani became mayor, couldn’t raise enough money to fix the pipes, though not for want of trying, so the basin became a flower bed, and much of the monument’s poetry evaporated along with the water that was central to its meaning. As I walk through the park now, my mind’s eye sees so much of the New York that is lost: the Strauses, the film-version Macy’s of Miracle on 34th Street, the throng of Holocaust survivors who lived in the Straus Park neighborhood when water still filled the pool, and the vanished pool itself.

One other layer of vanished New York history also lingers in the park. The model for the reclining statue of Memory was Audrey Munson, the nation’s first supermodel, whom sculptors and viewers alike admired as “The American Venus,” in the days when New York thronged with talented artists and its civic pride built a cornucopia of monuments. A photographer discovered the 15-year-old Munson in 1906, as she was walking along Broadway, and from then on she posed, often naked, for almost every major American sculptor, from Karl Bitter, who portrayed her as Pomona on the Pulitzer fountain in front of the Plaza Hotel, to Daniel Chester French, who cast and carved more than a dozen images of her, to Attilio Piccirilli, who used not one but two images of her at the top and the base of the USS Maine memorial at the southwest corner of Central Park. She posed for the figure of Civic Fame crowning New York’s Municipal Building, and she adorns the Frick Museum, the New York Public Library, and the Firemen’s Memorial on Riverside Drive, whose fountain seems to have dried up just this spring. Going beyond civic fame, Munson became world famous as the model for most of the many sculptures at the 1915 San Francisco world’s fair celebrating the opening of the Panama Canal. She even was coined into money, on the face of the old silver dollar. And of course Hollywood came calling. She appeared in four films, silent but eloquently naked, between 1915 and 1921. 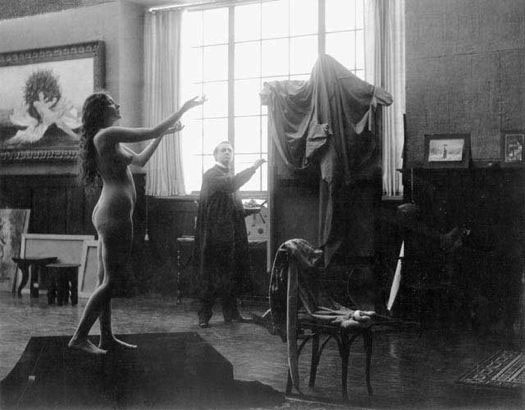 But even before the last movie, her beauty and early fame, as in a Greek myth (or a four-hankie movie), drew down Nemesis. Back in New York in 1919, Munson and her mother lived in a boarding house, whose owner, a Dr. Wilkins, fell obsessively in love with her. After she and her mother decamped, the doctor killed his wife, purportedly hoping to marry his ravishing former lodger. The police hunted for Munson as a possible suspect, tracking her down in Canada, where she satisfactorily explained that she’d left her lodgings because Mrs. Wilkins had asked her to. So the doctor went on trial, drew a death sentence, and hanged himself in his cell.

But here the tale gets confused. Whether because of the tabloid notoriety, the change in artistic tastes, or increasing mental instability, Munson got no more work as a model. In 1922, she tried to poison herself. In 1931, a judge consigned her to a mental hospital, where she dwindled away for 65 years, until her death in 1996 at 104—when Straus Park had already been restored. 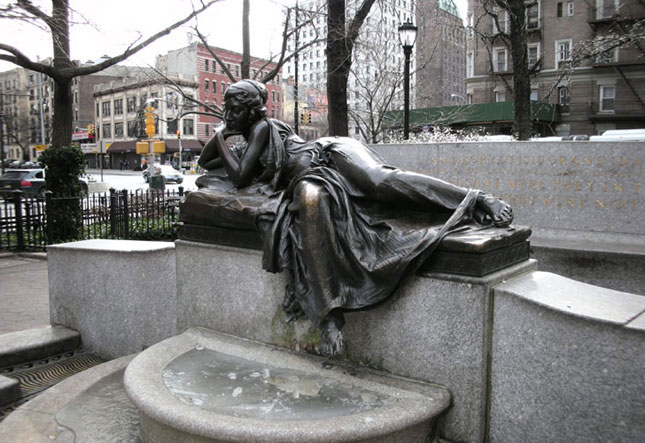 The granite bench behind the park’s statue of Memory bears an inscription from the Book of Samuel: “Lovely and pleasant were they in their lives, and in their death they were not parted”—though I prefer Mrs. Straus’s paraphrase of the Book of Ruth. But Memory: in this city so filled with present striving, hustling, and conflict, the past vanishes so quickly—like the Strauses’ pool and now even the fountain at the Firemen’s Memorial, where every year New York’s Bravest gather in full dress to honor their fallen comrades, especially the heroes of 9/11. There are some things New Yorkers should never forget.

Top Photo by Library of Congress