An obscene spectacle took place in North London on September 11, 2002. A thousand Muslims gathered at the Finsbury Park mosque to “celebrate” the bombing of the World Trade Center. The Metropolitan Police deployed a force 500-strong to protect the meeting, called “A Towering Day in History,” from disruption. A dozen or so menacing-looking men with kaffiyehs over their faces stood on the mosque’s steps to prevent unfriendly journalists from entering.

The “celebration” began promptly at 1 pm, so that participants could applaud the action of the WTC bombers at exactly 1:46 London time—the exact time, a year earlier, when the first plane hit its target in New York. Chairing the meeting was Abu Hamza, an Egyptian-born engineer turned Muslim mullah, who presides over the notorious Finsbury Park mosque, where several of the detainees in Camp Delta, Guantanamo Bay, captured fighting for the Taliban and al-Qaida, received their theological training. Hamza also reportedly recruited to the jihad Richard Reid, the would-be shoe-bomber who failed to blow up an American Airlines flight from Paris to Miami on December 22, 2001. The good imam is implicated as well in the training and instigation of Zacarias Moussaoui, under arrest on suspicion of conspiring with the 19 murderers of September 11.

The FBI has applied for Hamza’s extradition from the U.K. for questioning in the U.S. (the mullah has been a British subject since 1985), but he is still at large in London, free not only to address his congregation but to “celebrate” the events of 9/11. He told the press that Saudi Muslims financed the “celebration” in the hope that from it will arise an organization that represents “the real views of Muslims in Britain.”

Scotland Yard’s information office refuses to answer questions as to why Abu Hamza isn’t under arrest. Several leaders of the Muslim community in Britain allege that he is working for the British Secret Services—in particular, MI5—as an agent provocateur, but the more likely explanation is that he is more useful to the surveillance services as a free agent than he would be in detention. The police outside the “celebration” had a dozen or so photographers videotaping or taking snapshots of everyone coming into or out of the mosque.

Hamza and his mosque act as a focus for young men who have taken the first step of embracing jihad Islam. They have been known to “pass through” the Finsbury Park mosque and then branch out into clandestine training facilities and programs in Britain and abroad. At last count, the British Foreign Office reported that at least 4,000 British Muslims had received training from al-Qaida, the Taliban, or associated terror groups. Many of these came from Hamza’s congregation, which acts as a point of contact with networks abroad.

Hamza is in every way a sinister character. He is blind in one eye, and his left hand has been blown off and replaced by a metal claw. He claims in interviews that he lost his hand and eye when fighting the Russians in Afghanistan, and he uses these injuries as his warrior credentials. The claim is a lie. A British documentary producer, Alu Jamal, interviewed him on camera in Pakistan for a BBC film a year after the Russians left Afghanistan. The footage shows Hamza with his eye and hand intact. His injuries probably result from mishandling explosives.

Hamza is also wanted on criminal charges in Yemen in connection with an incident in 1998, when six young British Muslims, all of whom had at some point been under his tutelage, were arrested in that country on suspicion of terrorism. They were caught with weapons, explosives, plans, and maps—all of which they intended to use to attack British diplomats, their families, homes, offices, and church. When the men were captured and tried, they and their families in Britain instantly applied to these same diplomats whose families they had come to murder to represent them—as they were British citizens—and to secure their release from Yemeni justice. One of the young men ultimately convicted was Abu Hamza’s adopted son.

The trail of the terrorists led back to Hamza. Far from denying—as their families insisted on doing, despite the evidence—that these men were on a terrorist mission, Hamza said he was in favor of armed struggle against all agencies of the British state that supported corrupt regimes, and if these men, including his son, were found guilty and executed, they would be martyrs to the cause of Islam.

If this isn’t sedition, what is?

It was pure chaos outside the mosque. A handful of neo-fascists from the British National Party demonstrated under the banner “Keep Britain Out of Foreign Wars, Keep Foreign Wars Out of Britain.” Joining them on the street were a few hundred stalwarts of the Anti-Nazi League—there to protest not the evil “celebration” going on in the mosque but the presence of the British National Party!

The assembly adjourned twice for prayers, and the crowds flowed out into the courtyard, led by the muezzin. The star of the meeting was Omar Bakri, a cleric of Syrian origin who heads the sinister cult Al Mahajiroun, which draws its recruits mainly from the colleges and universities of Britain. Al Mahajiroun seeks to make Britain an Islamic state. Bakri told his rapt audience that they must learn the “lessons” of September 11—the murderous lessons, presumably. 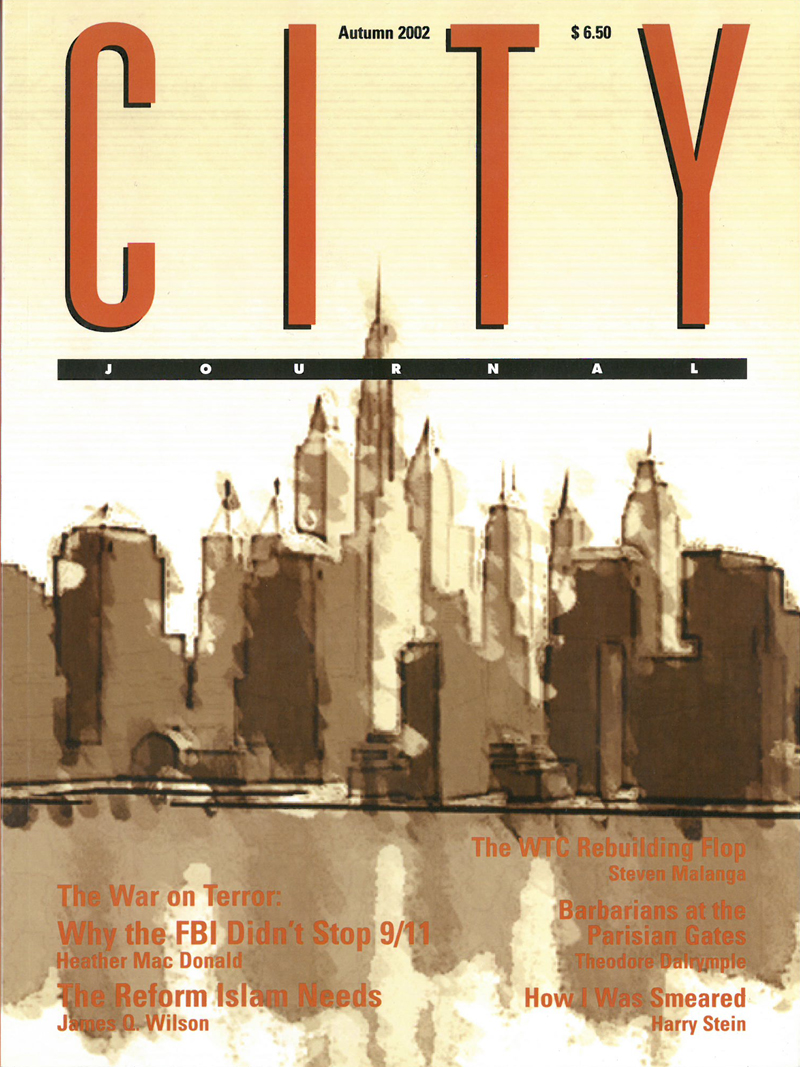 Farrukh Dhondy Jihadist mullahs urge 1,000 followers to learn the murderous lessons of the WTC attack.
from the magazine