Less than a year ago, Lindsay Shepherd was an unknown graduate student in communications at Wilfrid Laurier University in Waterloo, Ontario, who enjoyed shopping in thrift stores. Then the university accused her of making her undergraduate students unsafe by airing a debate on gender pronouns in class, and she found herself at the epicenter of an international debate on academic freedom. Shepherd is using her newfound fame to advance the cause of open inquiry and free speech on campus, even if it means taking her university to court.

Last November, Shepherd secretly recorded a disciplinary meeting in which she was interrogated by two professors and an administrator. The issue: her screening of five minutes from a public television debate on gender pronouns, featuring controversial University of Toronto psychologist Jordan Peterson. Shepherd was accused of “legitimizing” Peterson’s arguments “as a valid perspective” and thereby creating “a toxic climate for some of the students.” She had violated Canadian human rights law, the administrators said, as well as the university’s “gendered violence” policy.

Shepherd went public with her recording, which quickly became a sensation, particularly for conservatives. A public relations disaster ensued for Laurier, prompting them to quickly launch an independent investigation. The outside inquiry revealed a series of institutional failures, and Shepherd was cleared of wrongdoing. Deborah MacLatchy, the university’s president, apologized and promised to take steps to ensure that the mistakes wouldn’t be repeated.

Since then, Shepherd has become almost a folk hero to young conservatives. She’s gained tens of thousands of followers on Twitter and is frequently invited to give speeches across Canada and the U.S. On campus, she started a free-speech student group. She has also courted additional controversy: in March, she invited Canadian alt-right figure Faith Goldy to speak on campus; the event sparked mass Antifa protests and was shut down before Goldy could take the stage. On social media, Shepherd has mocked “white privilege” training campaigns. And in June, she announced a lawsuit against Laurier. She alleges that far from finding redress following MacLatchy’s apology, she’s been subject to “continuing abuse and a toxic climate from the university and its representatives.” The lawsuit seeks $3.6 million (in Canadian dollars) for harassment and other damages.

Is Shepherd the first victim of Federal Bill C-16, a vaguely worded law that added gender identity and expression to the Canadian Human Rights Act, or is she a provocateur and “transphobe,” as her detractors claim? I met Shepherd last month in New York ahead of her appearance at a conference. We spoke in front of a large window in a hotel adjacent to Times Square. With the bright lights of the street illuminating her photogenic features, she looked more like a Broadway performer star than a grad student. “I think I would have been more ignored by the media and public if I were a white male who played a Jordan Peterson clip in my class,” she joked. 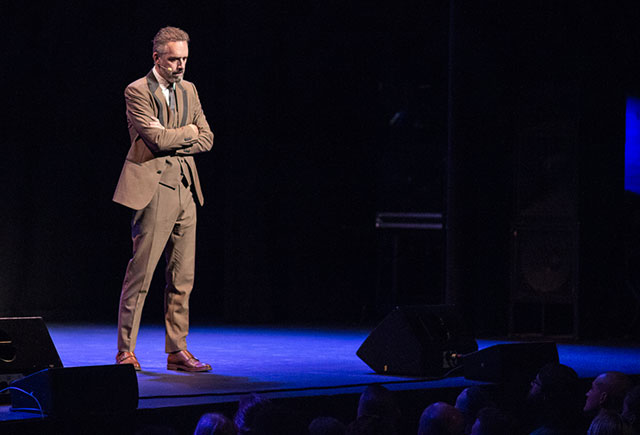 Laurier launched another investigation into Shepherd earlier this year. She declined to give details, but according to court documents, one of Shepherd’s peers, a trans activist, accused her of discrimination and harassment, which she denies. Shepherd’s only comment on the matter is that this is an attempt to silence her. Shepherd’s accuser did not respond to repeated inquiries for comment.

Laurier sent me a prepared statement saying that it has provided Shepherd with redress. This includes the public apology but also a review and update of university policies, including a university-approved “statement on freedom of expression” similar to the University of Chicago’s free-expression principles. The statement says that Laurier will “vigorously defend” itself against Shepherd’s claim.

Shepherd has found support from the man whose views got her in trouble in the first place: Jordan Peterson. He announced a defamation lawsuit against Laurier for C$1.5m in late June. In Shepherd’s recording, her professors compared Peterson to Adolf Hitler and questioned his academic credentials. “I didn’t go after [Laurier] for eight months until it was absolutely crystal clear that they learned nothing whatsoever,” Peterson told me. “So maybe two lawsuits is a better lesson than one.”

Peterson is in the middle of an international tour to promote his best-seller 12 Rules for Life: An Antidote to Chaos. Like Shepherd, he’s seen by his admirers as a free-speech hero who fights political correctness. I asked Peterson if it’s hypocritical to sue based on what individuals say about him in a private conversation. He looked annoyed.

“It was a disciplinary meeting at a university. That’s not private,” he said. “Those people were operating under what should have been appropriate administrative guidelines—dozens of which they violated simultaneously. It wasn’t a dinner party between friends.” He added that free speech doesn’t mean that one can “lie and slander” with impunity. “That’s the sort of caricature of free speech that someone who hates it would generate to interfere with the integrity of the idea.”

Some of Shepherd’s actions continue to raise eyebrows and give fodder to her detractors. Earlier this year, she was interviewed by Brittany Pettibone, an alt-right-sympathetic YouTuber who, like Faith Goldy, opines frequently about immigration and European identity. In March, Shepherd disavowed “the Left” in a video that’s been viewed more than 800,000 times. And she has completed the Canadian right-wing media circuit, speaking to Mark Steyn and others. But she rejects political labels, pointing out that she still has the same socially progressive views as before. She says that standing up for the principle of free speech means engaging with those she may disagree with.

Is she a right-winger? She said no, but I sensed some enjoyment in the ambiguity. “I like to leave a little mystery.” I asked her if she regretted releasing the recording. She is persona non grata on campus and even in some quarters of Waterloo. Her goal of working in academia is in doubt at this point. But she didn’t hesitate to answer. “At the end of the day, I would probably do this all again. How can you ever regret something that made you into the person you are?”

Ilya Shapiro Three plaintiffs credibly allege that Twitter became a government tool by censoring their speech at the behest of the Department of Health and Human Services.
Saved!
Close